By Grey -  Fri Jan 07, 2011 4:25 pm
Posts:  3255
Joined:  Mon Jul 26, 2010 3:48 pm
-  Fri Jan 07, 2011 4:25 pm #82206
Introduction
The Utricularia (or “bladderwort”) is the largest group of carnivorous plants with over 200 known varieties currently documented. They get their name from the way they trap their prey: they produce stolons which are packed out with tiny, microscopic “bladders” which activate when micro organisms (tiny creepy crawlies) brush against even tinier, more microscopic trigger hairs. This activation leads to the “door” of the bladder opening, creating a vacuum which then sucks in the Utricularia’s prey and ejects any water that may have entered; the “door” then closes and the trap resets.

The bladders on the stolons of Utricularia.

Unlike other carnivorous plants, Utricularia do not technically produce roots but instead grow a decentralized system of modified stems - this means that they are extremely easy to propagate and repot, as you never need to concern yourself with accidentally damaging roots. Even if a clump of stems/stolons doesn't have any leaves, you'll find that new sprouts will often emerge.

Many varieties of Utricularia regularly produce delicate flowers of varying sizes and colours. Most are very easy to grow and terrestrial varieties are quite happy when placed in any pot, even a tea cup.

There are four main varieties of Utricularia: terrestrial (above ground), aquatic (found solely in water), semi-aquatic (somewhere in-between) and epiphytic ("air plants"). This care sheet relates to the care of terrestrial Utricularia.

Interesting facts
* Some species of terrestrial Utricularia can self-seed (U. calcyfida is one example); this combined with the ease at which most Utricularia can be propagated means that they can very readily become weeds in an individual's collection.


Soil
Like most carnivorous plants, terrestrial Utricularia are perfect partners with a potting media made of peat moss, sphagnum and perlite. Other aeration materials such as granite sand works as well. Mine grow in a mixture of peat moss and granite sand at a ratio of 4:1.

Light
Most terrestrial Utricularia are not as fussy when it comes to light as other carnivorous plants, but certain species can be sensitive to harsh, direct light (a good example of this is U. calycifida). I’d recommend treating their lighting conditions as you would a Dionaea Muscipula, but don’t worry if you find yourself unable to provide as much light. A bright, sunny windowsill should do nicely for all but the fussiest of species.

Humidity
One of the great things about Terrestrial Utricularia is that they have a relatively relaxed opinion on humidity. As long as humidity doesn’t dip below 40% they are quite content.

Containers
Although not recommended for most carnivorous plants, an undrained container can be your terrestrial Utricularia’s best friend. Even something as simple as a tea cup can be an ideal home for this plant – as long as you repot once they fill their container! Some species of terrestrial Utrics can self-seed (U. calcyfida is one example), this combined with the ease at which Utrics propagate anyway means that certain species may become a weed in your collection, so it's important to ensure your container is large enough to accommodate the plant if you want a particularly big one.

Water
Like all carnivorous plants, pure water is a must. Distilled, deionized, demineralised, reverse osmosis or rain water are perfect for a Terrestrial Utricularia. Keep their soil relatively moist. Some species of Utricularia enjoy an occasional flooding.

Recommended beginner’s plants
Some species of terrestrial Utricularia are easier to care for than other; three highly recommended, forgiving species are U. sandersonii (more info available below), U. livida and U. pubescens. If you are unsure of where to buy these plants, or any other species of Utricularia, you could possible try the list of carnivorous plant suppliers.

Utricularia Sandersonii
From South Africa, the Utricularia Sandersonii grows very vigorously. I have one of these and despite losing half its root system it is still thriving. They produce beautiful pale lilac flowers that look like bunnies. The flowers are usually only a few millimetres across, but are large enough to be seen and to be beautiful.

They flower freely throughout the year and look wonderful in any room of the house.

Many thanks to w03 for the help ensuring that this guide is as up-to-date as possible!
Grey, Grey, Grey and 3 others liked this
"Retired" in 2017.
List of online carnivorous plant suppliers

Daniel_G liked this
Dan Galley, Sarracenia Addict, and Trainee Horticulturist.
If you have any rare Sarracenia that aren't on my growlist, send me a message!

bananaman liked this
My Growlist
Non-CP seeds for SASE

My Growlist
Non-CP seeds for SASE

CarnivorousStu wrote:do these plants need any sort of winter dormancy?

There are many different species of Utrics (more than 200) ranging from terrestrial to aquatic from all over the world. Its kinda hard to answer your question because you didn't mention a specific Utric.
The most obvious rule for any plant is: 'If it originates from an area which gets a cold winter, it needs a winter dormancy and if its from an area which doesn't have cold winter temps, (eg. tropical countries) it can be grown without a cold winter dormancy'

Could not figure out repoting "– as long as you repot once they fill their container!"

Soil could be peat moss 4 parts to 1 part either of perlite / granite sand?

The soil you chose will be fine as long as the sand is pure silica sand, other sands may leach minerals into the soil and cause damage. Perlite is fine

-  Fri Jul 06, 2012 9:45 pm #148010
i wish there are utricularia that produces massive sized traps on the surafce with leaves and underground too(their sucking power is soo strong that it sucks fly out of air)

-  Mon Sep 24, 2012 5:42 am #154467
I have a Utricularia Sandersonii in a 2in pot when i first got i It was only a small patch now its covering about 80% of the pot surface but it hasn't flowered since i got it , I read that this plants flowers year round is that true? like do they always produce flower after flower? I have in growing in a small terrarium with my nepenthes ventricosa.How can i make it so it flowers? I grow under led light and i leave the lights on for about about 10-12 hours. 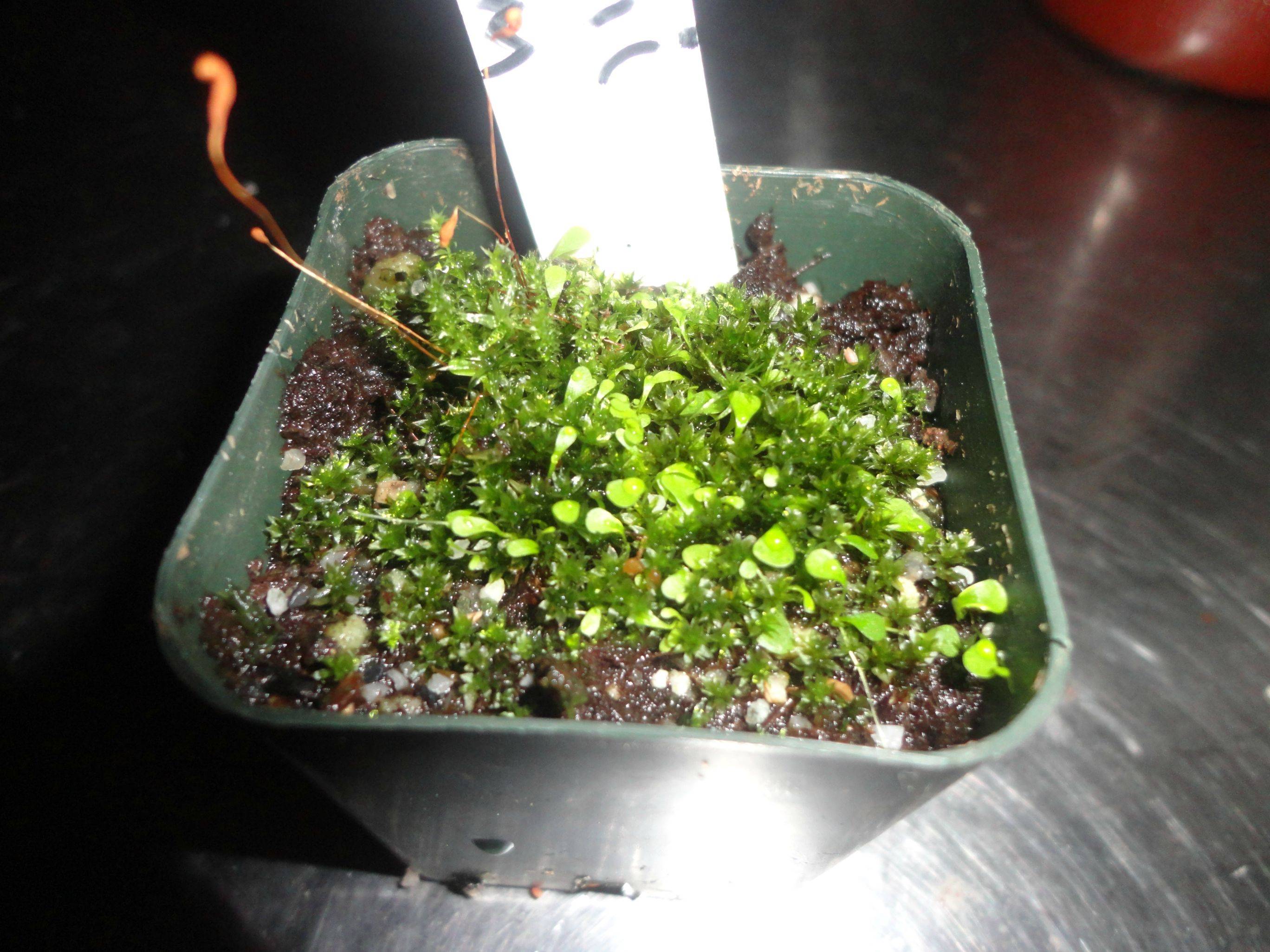 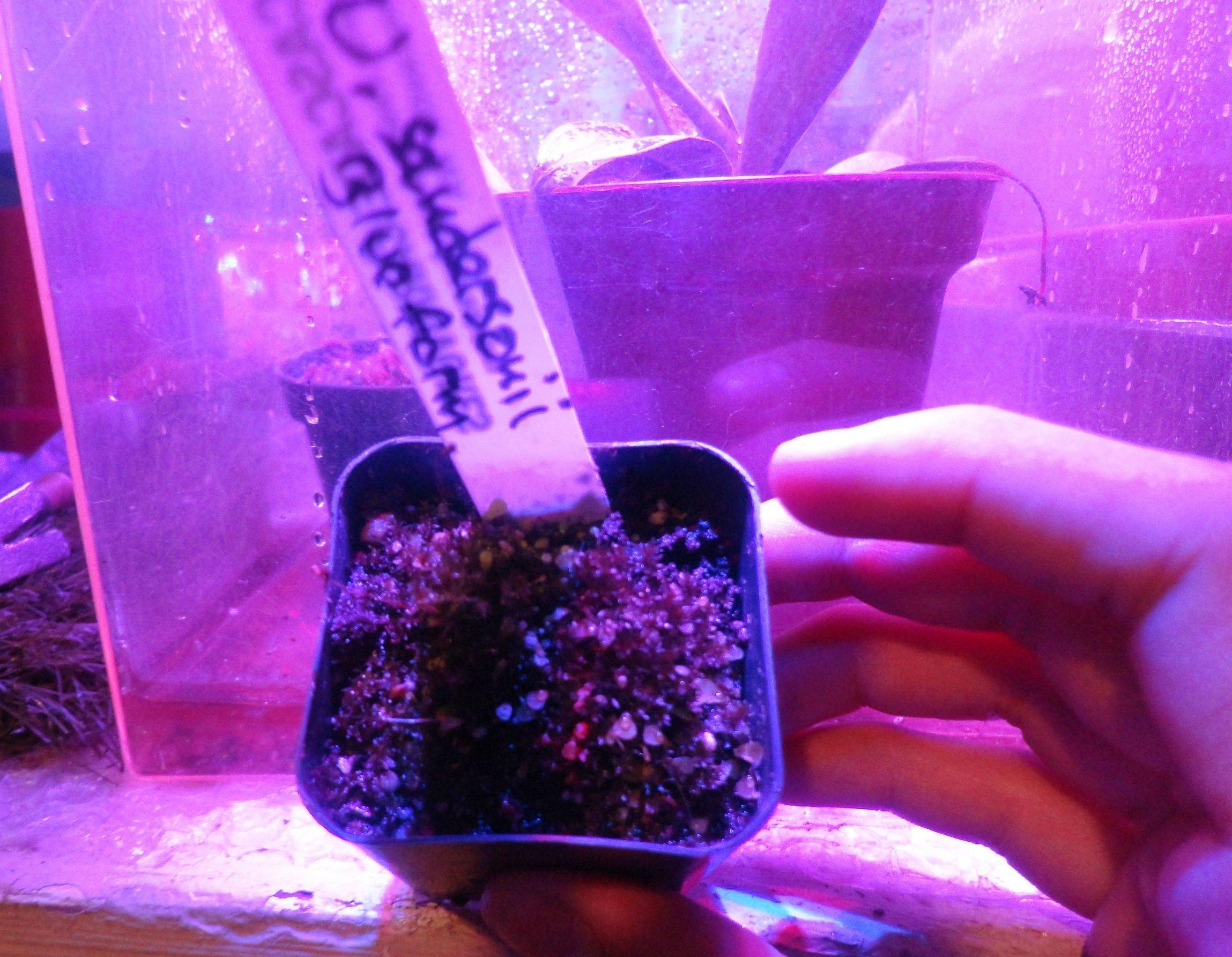 -  Mon Sep 24, 2012 8:41 am #154471
To be honest I've had more success with having a U. sandersonii flower on my windowsill than anywhere else. I used to keep mine in a terrarium and the amount of flowers it produced decreased drastically, I'm sure if it was kept there for a longer period of time it owuld have eventually stopped.

Do your LED lights have plenty of red bulbs? As far as I know red bulbs encourage blooming. The plant looks really lovely in your photo so I don't know what else could be causing the lack of flowers right now except for lighting. If I think of anything else I'll let you know.
"Retired" in 2017.
List of online carnivorous plant suppliers

Grey wrote:To be honest I've had more success with having a U. sandersonii flower on my windowsill than anywhere else. I used to keep mine in a terrarium and the amount of flowers it produced decreased drastically, I'm sure if it was kept there for a longer period of time it owuld have eventually stopped.

Do your LED lights have plenty of red bulbs? As far as I know red bulbs encourage blooming. The plant looks really lovely in your photo so I don't know what else could be causing the lack of flowers right now except for lighting. If I think of anything else I'll let you know.

Have any plants you don't want? PM me!

One last question: is the perlite and silica sand […]

It works. Already have some plants under my bed wi[…]

I use trays, but my strays aren't very deep. Every[…]

The hitchhiker is a Utricularia, but I don't know […]

Here is a mini cactus I bought from a grocery stor[…]

I have the ubiquitous subulata and have yet to s[…]