By Apollyon -  Wed Jan 27, 2021 5:32 pm
Location:  Merritt Island, Florida
Posts:  980
Joined:  Tue May 05, 2020 2:49 am
-  Wed Jan 27, 2021 5:32 pm #372594
Honestly every person seems to do it differently. When I've shipped out plants (I'm more meticulous than most), I would use LFS that I've squeezed a lot of the moisture out or some of the media from a plant with a damp paper towel and wrap it in saran wrap around the cut point. From there, if the cutting is small enough I would put it in a gallon ziplock back that I fold and tape together to keep it from drying out or movingwhile wrapping the plant marker outside at the same time.

With pinguicula the concept would be the same for me but I personally use sauce cups with some wrung out LFS, they're not really fans of heavy moisture and do fine for lengths of time in barely moist. I tape it closed with a plant sign on top.

On the other end, some throw the stuff in LFS in a ziplock bag flat out and that works too. I haven't had a trade here that has died on me in transit.
Benny, Supercazzola liked this
Today I will do what others won't so tomorrow I can do what other's can't. Carnivorous Plants for Sale! -> topic48806.html
My Grow List

-  Wed Jan 27, 2021 5:37 pm #372595
Someone needs to make a post or two on shipping, and get them stickied so people can find them easier. As far as I know, there isn't one already (I might have missed it, though).
Supercazzola liked this
"Complaining about a problem without posing a solution is called whining." - Theodore Roosevelt

-  Wed Jan 27, 2021 5:48 pm #372596
For cuttings, I place them in 1-2 layers of paper towels (moist, not sopping) and inside a sealed ziplock bag. Cuttings are a lot harder to damage than plants so I wouldn't be worried. I use paper towels because it's a lot less messy than LFSM. I'm going to make a post about shipping CPs here soon, I couldn't find one when I was starting either.
Supercazzola, Benny liked this
My Growlist- nepenthes0260-s-growlist-t39355.html

-  Thu Jan 28, 2021 12:32 am #372606
Basically, and most people pretty much follow this, anything bigger than seeds should be shipped in a padded envelope at a minimum. Seeds can be shipped in a standard envelope, with padding added in the case of bigger seeds.

Having said that, there are ways to bend that around. For example, I just received D. scorpioides gemmae, and they were in a regular envelope. Scorp gemmae are some of the bigger gemmae, so they could have been in a padded envelope, or even a small box. However, the one who sent them to me packed them in such a way that even though they took three weeks to get to me, and they were machined at least three times (despite having a non-machinable stamp and having "non-machinable" written very clearly on it), they arrived in a still moist paper towel with only minimal losses. Most of them were actually sprouting.

Cuttings should be the same, padded envelope at a minimum, small box preferred.
Now, having said that, I have, no fooling, for real, for really real, actually received a whole Cape, an entire plant, albeit a juvenile, in a standard envelope. This one took almost six weeks to get to me (I don't know the story there), and the plant along with the cuttings that accompanied it were completely flat but still green. Definitely packed with care. I don't even want to guess how many times it was machined. However, being Capes, the plant and every cutting grew multiple strikes within about a month.
Maybe I got lucky.

In my experience with sending and receiving plants, seeds, and all their accouterments, a good rule of thumb to follow is: For all the above, except seeds, write "Live Plants" somewhere if possible. There are some employees of the various carriers that will take extra care if they see it. Even though I have an opinion of the USPS as a whole, I've also seen my postal carrier with boxes that I've sent, or I'm receiving, up on the dashboard to get some heat in colder weather.

Definitely not the end-all for shipping plants, just my thoughts based on my experiences. Maybe look at it this way; ship it to them the way you would want them to ship it to you. Plant-based "Golden Rule".

Chef
Shadowtski, Supercazzola, Apollyon and 1 others liked this
Everything happens for a reason. Sometimes the reason is that I make bad decisions.

Short answer, yes. Longer answer, it depends on the plant. This thread got off topic and covers some aspects of the legality of plants that are endangered in the wild.

sale-trade-requesting-advice-t48811.html
Supercazzola liked this
Everything happens for a reason. Sometimes the reason is that I make bad decisions.

ChefDean wrote: [*]Plants, all, it doesn't matter how small, potted or bare root: in a sealed plastic bag in box at a minimum, big enough to contain the plant without too much constriction. You'll need to arrange packing material as needed to secure the plant inside the box while minimizing damage potential from handling en route.

-  Sun Feb 07, 2021 6:01 pm #373200
Personally, I don't like the shape of the small flat rate box. I think it's safer to have a more cube-shaped box. That way the plant can be better insulated and padded all around. I've received many flat-rate boxed plants that were taped to the side - meaning zero protection and insulation on that side. You can buy small boxes on the interweb for around $1 a piece. If the packed, ready to ship, weight is under a pound, it'll cost about the same as the flat rate box to ship. If you use Click-N-Ship, you don't even have to leave the house - they'll pick it up at your front door. If you do want to visit the Post Office, you also have the option of shipping the box First Class - maybe an extra day in travel time but also a saving of several dollars in cost.
MikeB, Supercazzola, elaineo liked this
Whenever I see lover’s initials carved on a tree, I wonder… Who brings a knife on a date?

I save small boxes that bring all the items my wife and daughters order, larger boxes I cut up for cardboard frames in seed bank return envelopes.
The small boxes with one or two juvenile plants cost about $5 to ship if you take them to the post office, weigh it there, and they print out postage. I don't know how much it would be if you have an account to print everything out at home. Small = about 4 x 4 x 4 inches.
elaineo, MikeB liked this
Everything happens for a reason. Sometimes the reason is that I make bad decisions.

-  Mon Feb 08, 2021 1:20 am #373243
I'm going to let you all in my best kept secret. If you use click and ship, look into using regional rate boxes. You have to order the boxes online but they are free and they deliver to you. Then, when you generate the label you don't use flat rate. You select calculate postage by weight and then it gives you the option of selecting the regional rate box. Check it out and PM me if you have any questions.
Supercazzola, elaineo liked this
----------------------
Panman's Grow List topic47056.html
Toes in the water, ankles wet, and knees damp. 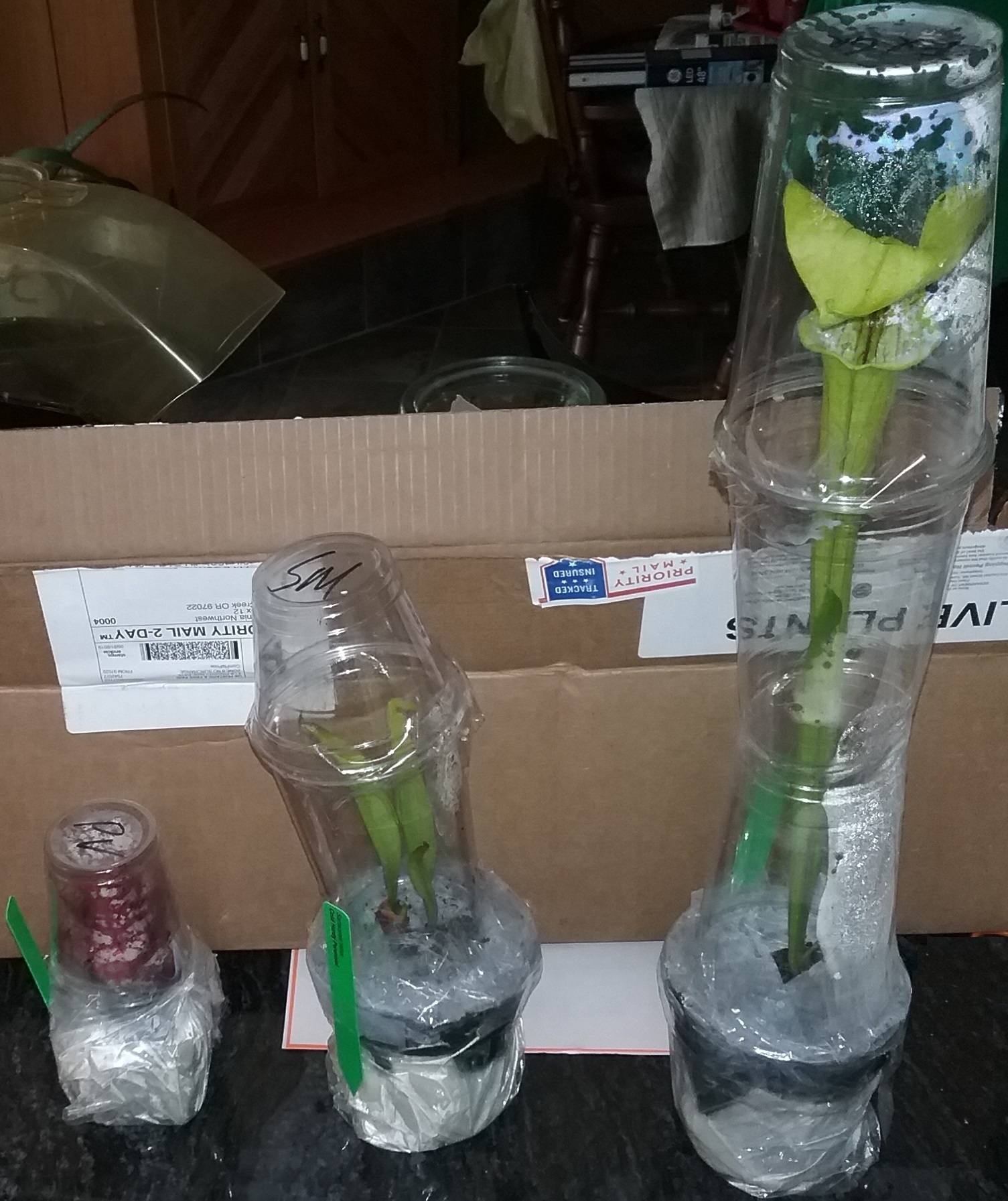 -  Tue Feb 09, 2021 3:18 am #373339
I actually saw those most interesting package yet, I'll need to get a picture of it. The supplier ordered plastic cases that seal (think like a package for a USB at the store or something like that) which was molded to hold his pots in place as well as having a dome shape for the foliage and plant itself. I always wondered why there was nothing like that before but I have a feeling these were custom ordered. It was for a pretty big CP nursery these days.
Supercazzola liked this
Today I will do what others won't so tomorrow I can do what other's can't. Carnivorous Plants for Sale! -> topic48806.html
My Grow List

I mixed it with distilled water so hoping it sh[…]

My first purchase from Calen was a couple seed-gro[…]

I had same issue with private messages earlier tod[…]

Welcome back! I noticed you joined way back in 20[…]

Would like to request D. Capillaris Tyler Co. TX […]

Are lovable Phil, Adam’s, and Nick still in […]