Welp, here we go....lol. (got my plants yesterday)

Joeynator3000 wrote: ↑Mon Mar 23, 2020 1:33 am Guess I'll deal with this once next month hits, kinda running out of money. Just gotta figure out where to find soil. I've seen some stores carry the moss, but the perlite/sand I keep finding always have the fertilizer stuff in it. (Miracle Grow) Go figure...lol

You can always buy some from Matt!
Cheers
Steve

-  Tue Mar 24, 2020 12:46 pm #350561
To provide additional illumination in the winter to photophilous plants, fluorescent fluorescent lamps can be used. Their spectrum is closest to natural light, in addition, they consume little electricity and do not heat up like incandescent lamps. Therefore, there is no risk of burning the leaves.
Good luck

By Archie Adams -  Tue Mar 24, 2020 12:51 pm
Posts:  43
Joined:  Mon Mar 23, 2020 2:33 pm
-  Tue Mar 24, 2020 12:51 pm #350563
In addition to my last reply the fact that the flytrap is not enough light will tell the appearance of the plant - its leaves will become wider and shorter: the plant enlarges the leaf blade, trying to catch as much light as possible. In addition, only in bright light the inner part of the traps in green leaf varieties becomes reddish, and in red leaf varieties it becomes bright red. With insufficient light, the plant, unfortunately, can die.
Matt liked this

Anyways dunno what's gonna happen to my red dragon...if I can't keep it alive, oh well, I tried. Wished I lived in a better location for those guys, I'm just glad that my sundew is doing well. Anyways I'll post an update here if something happens with my dragon, or maybe post about my sundew's flower, because that's happening as well.

EDIT: Here, have a couple of pics of my sundew taking in it's food. lol 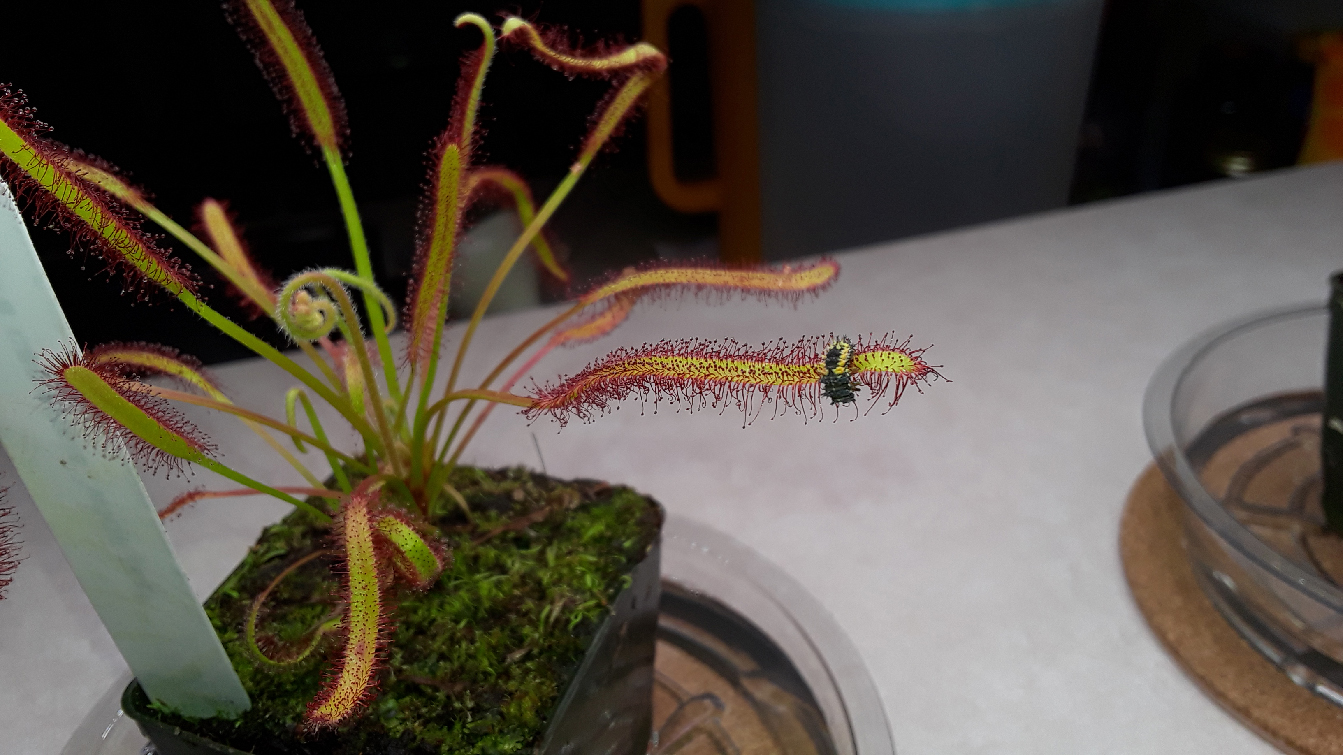 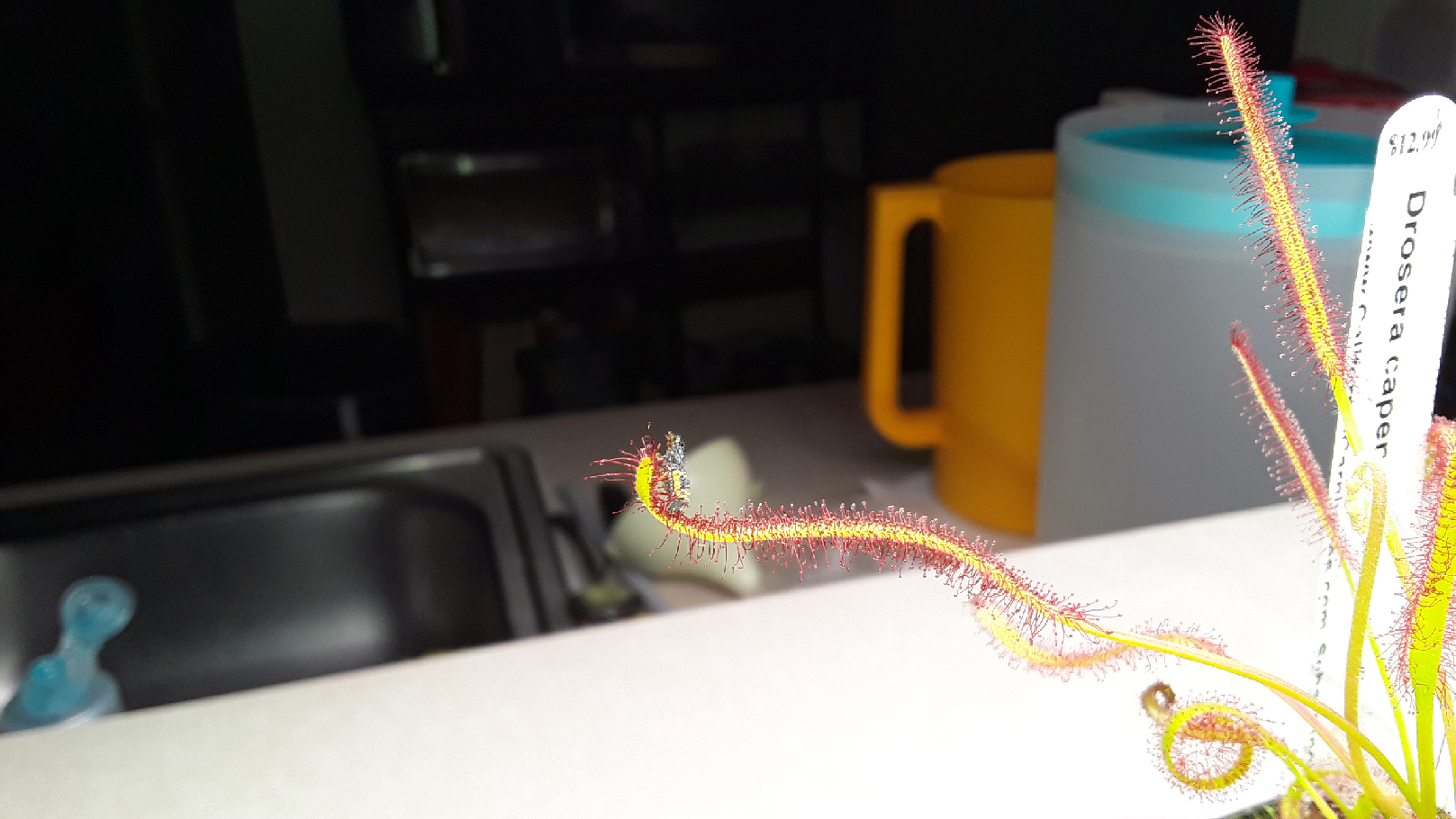 -  Fri Mar 27, 2020 9:33 pm #350799
Healthy sundew! If you need help with your flytrap, post a pic. Almost half of the leaves on mine died when I first received it, so it may be fine.
"Complaining about a problem without posing a solution is called whining." - Theodore Roosevelt

-  Fri Mar 27, 2020 9:37 pm #350801
I mean it's slowly turning red after putting it under my grow light for a few days. other traps look decent but one of them is probably dead (not triggering). Gonna wait since a new big trap is forming in the middle. So, maybe it is doing well and just needs to recover since outside where I live it's not getting much light. (it did lose some red coloring when I left it out there last weekend)

EDIT: The biggest trap was already close when I got it, I don't know if it's still capable of another meal but I've noticed that it's slowly opening. I'll try again with that trap next week at some point, so it looks like it's still alive and going.
*insert "AMAZING" signature here*

-  Sun Mar 29, 2020 12:22 am #350878
New plan...sorta, next best option for the flytrap is the back porch. Only direct sunlight it'll get is afternoon sun, and even then it'll be dappled/shade from trees and buildings. I'm pretty sure the grow light is still better than these other options, but...turns out the flytrap's soil has springtails. (flea-like "bugs")

I know they're somewhat harmless to plants and us since they don't bite, but I still don't feel like dealing with them. Pretty sure my family would start flipping out with them on the counter, lol. Anyways we'll see how it does on the porch, I may have to hand-feed it still since no decent sized bugs can get in.

We'll see how it does for the next week or so, if Matt wants to see a pic of it then I'll get one tomorrow. I do think it looks decent after being under the grow light, though.

EDIT: Oh yeah, meant to also point out that the sprinkler system isn't in the back area. So hopefully it'll do better there.

Cape Sundew status update: Still doing well, I'll probably still make a new pot and get seeds from the flower at some point. I posted some pics of the ladybug larvae I gave it yesterday, want more updates on that? :p

A little before noon when I woke up. 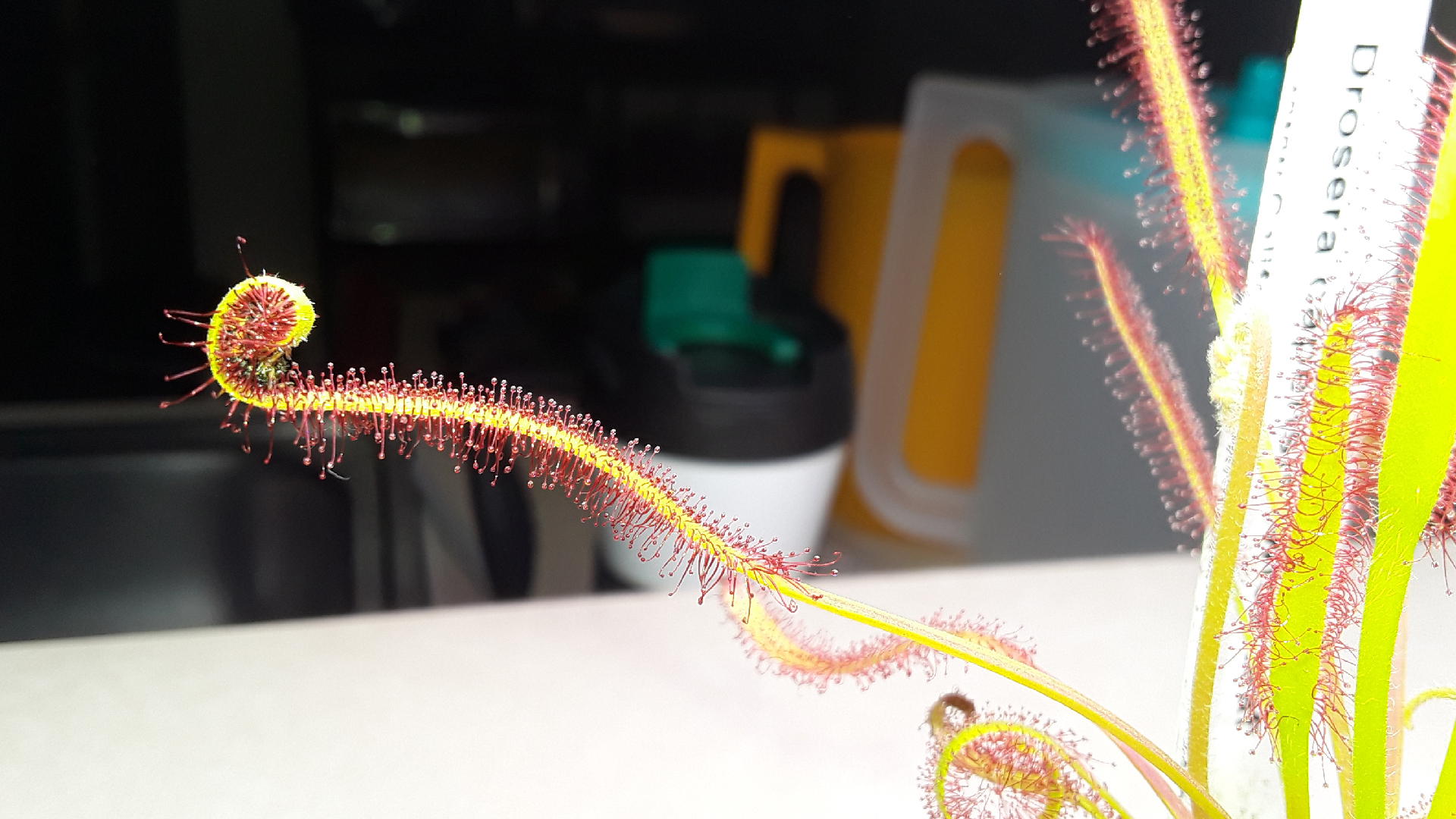 Later today, I think the bug FINALLY died at this point. xD 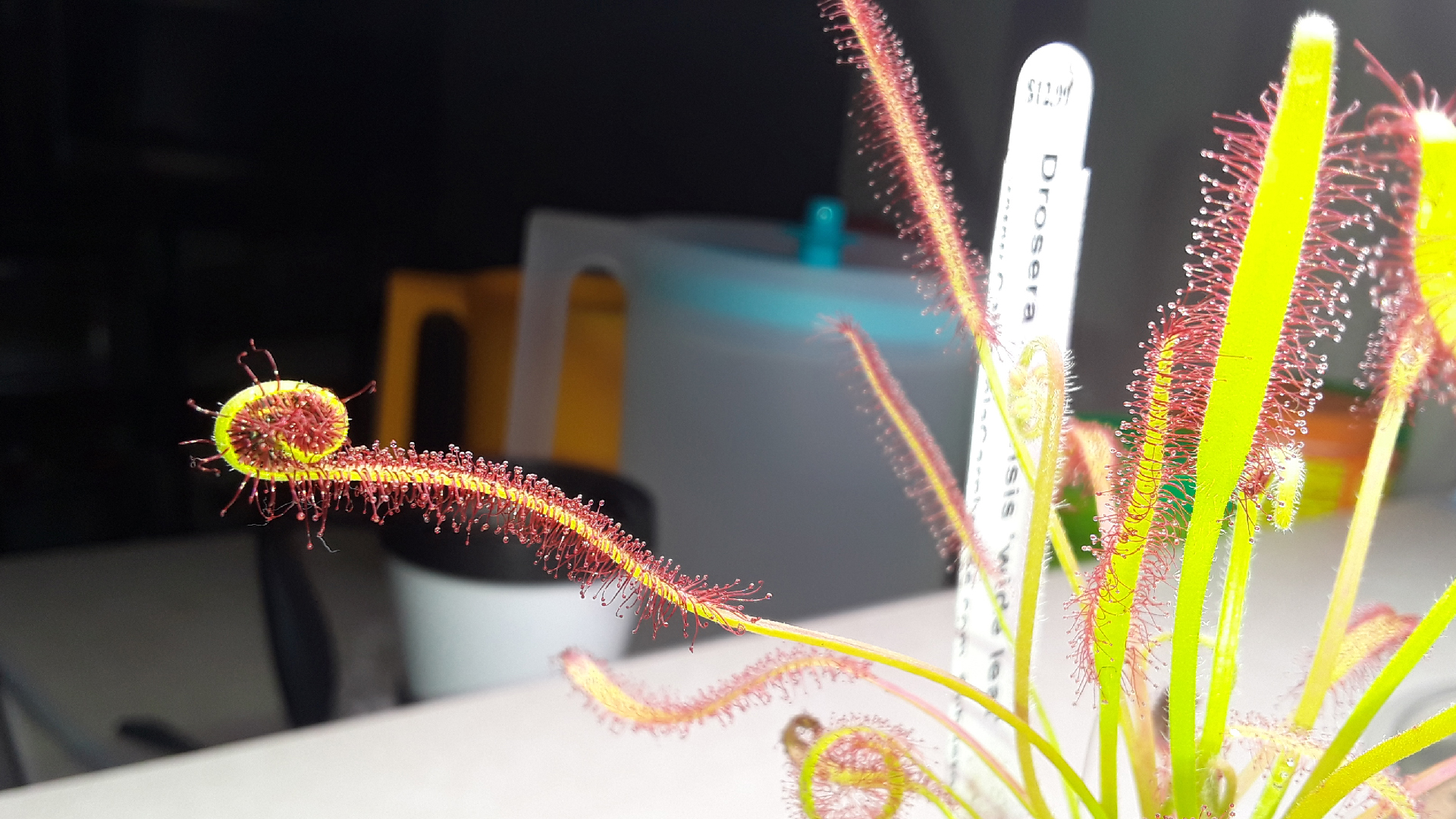 this is what I saw on them, so if you want more on them:
https://m.youtube.com/watch?v=r8HCPOm-1Tw
"Complaining about a problem without posing a solution is called whining." - Theodore Roosevelt

That said I just started noticing something about my Flytrap... 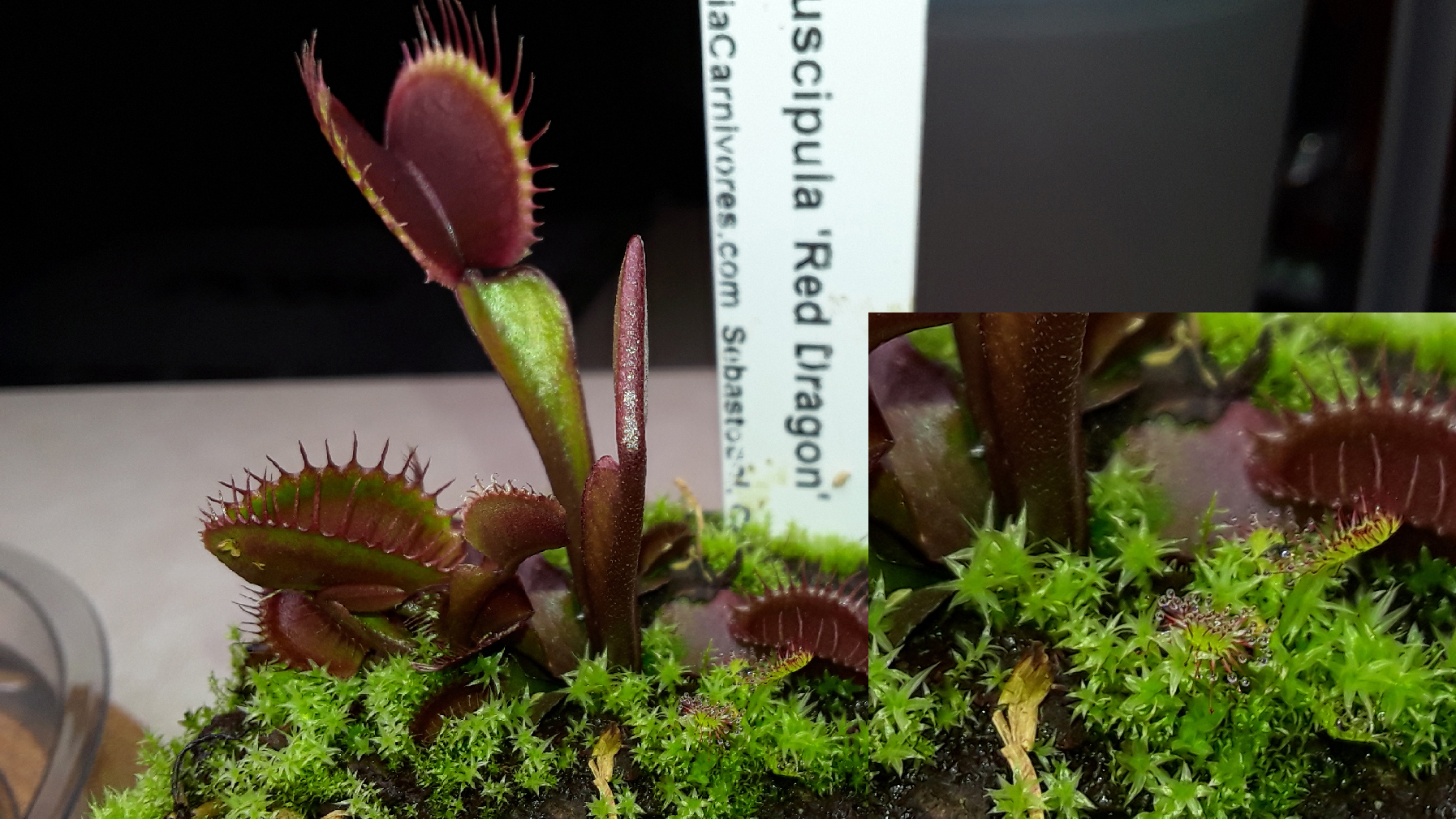 Sundew! lol (it even caught a gnat, lol)

I also think my cape sundew may have a bladderowrt as well. Too early to tell but I may take a pic of that at some point.
*insert "AMAZING" signature here*

-  Tue Apr 07, 2020 2:24 am #351359
Yeah I heard about that, I never noticed anything until recently. Also yeah I tried putting my flytrap outside for a few days but it's simply not able to get much light at all. So the grow light is the best it can get now, and it does seem to be getting better since then.
*insert "AMAZING" signature here*

Sounds like a unique style! I made mead once back […]

It should be tradition to send the seed bank ma[…]

Hi - along with most things it grows best in the c[…]

Hello, please, I would like to ask you if you have[…]

for the bonus i would like to try Drosera burmanni[…]