ambkosh8465 liked this
Bill
The Borg assimilated my planet and all I got was this lousy computer.

And here's a webpage that tells all about them:

They always give me the creeps, but my flytraps really seem to love eating them! They only seem to catch them at night, I guess because they're supposedly nocturnal, even though I do see them crawling around during the day too. They don't seem to chew on my plants and they don't spin webs like true spiders do. I guess they eat other smaller bugs, so I'm hoping they're giving my plants a good boost of nitrogen.
Bill
The Borg assimilated my planet and all I got was this lousy computer.

-  Sun Aug 05, 2012 7:13 am #150452
That was some serious struggling going on in that trap! Anybody else actually attempt to read that treatise from Duke? It was like someone sneezed ancient Greek symbols all over the page! I found myself doing a fair amount of goatee stroking while reading it, but alas, it did nothing to improve comprehension or attention duration. Veronis, if you were able to get through that whole thing and understand it, you are truly the Smartest Person on this Website. For me, it was sucking all the fun out of my hobby by page two. Thanks for the translation, though. ........I've kind of suspected that traps produce more attractant when not having eaten for awhile. Any evidence along those lines from the scientists or botanists?
"The only good bug is a dead bug" --Johnny Rico

-  Sun Aug 05, 2012 6:42 pm #150485
Well done Veronis, thank you for this instructive thread. I have a few comments. First of all, from what you interpreted I assume that insects play a bigger role in fly traps' lives then some sources are willing to accept. I've read that insects are considered to be something like a dessert for fly traps but it is clear that they get essential nutrients by digesting insects right? Second of all, those numbers regarding amounts of eaten insects are rather suspicious meaning they don't seem accurate. 30% of ants? Those must be really big ants. I'm posting a photo taken recently, it is only natural and topical to previous posts. 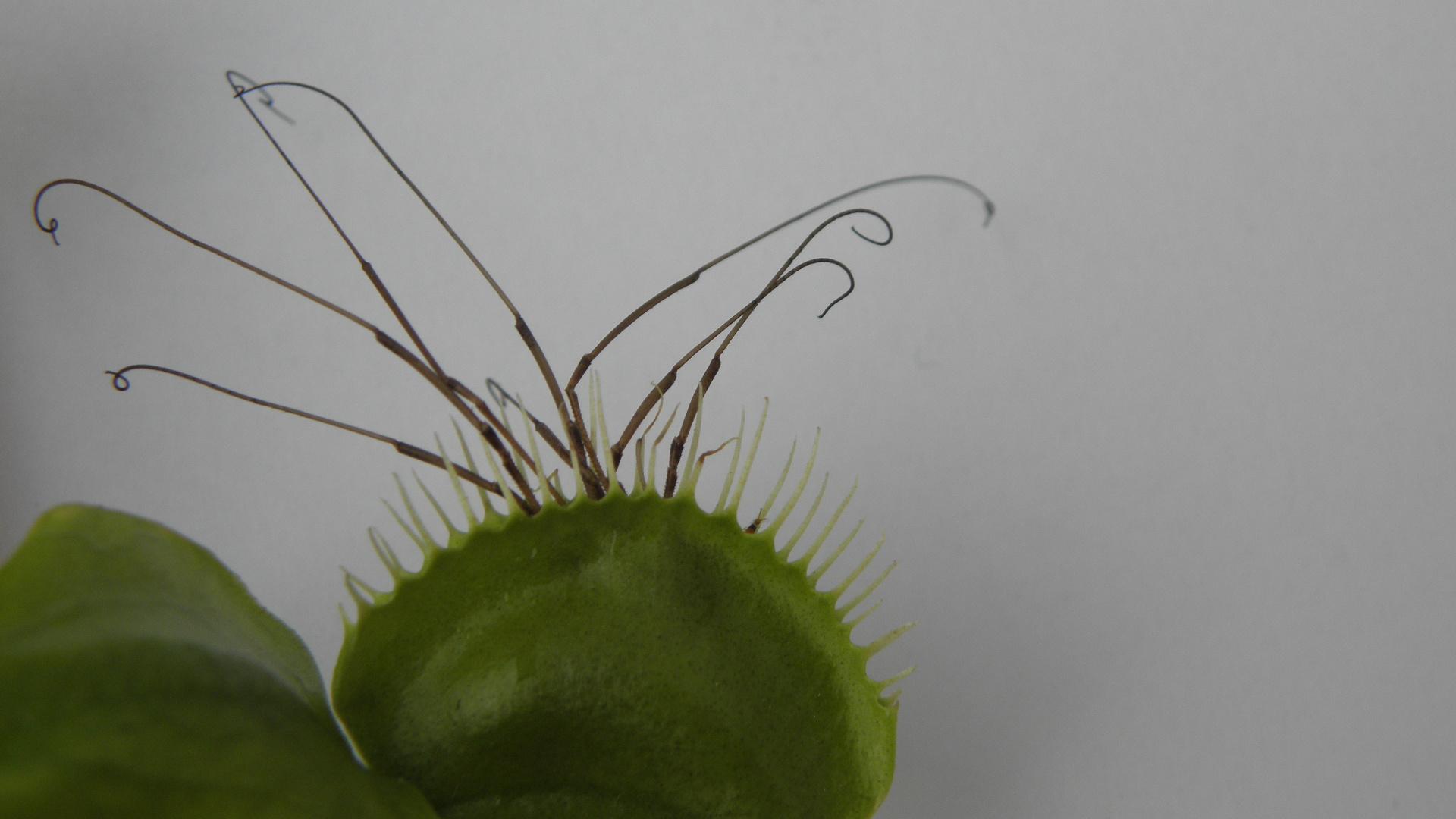 I would like to see a spider being caught and trapped with my own eyes. I mean it seems very unlikely, doesn't it?

hooofi wrote:I would like to see a spider being caught and trapped with my own eyes. I mean it seems very unlikely, doesn't it?

Not if you use a pair of tweezers!

Bill
The Borg assimilated my planet and all I got was this lousy computer.

ambkosh8465 wrote:Okay, I got a video of it this time!

hooofi wrote:Well done Veronis, thank you for this instructive thread. I have a few comments. First of all, from what you interpreted I assume that insects play a bigger role in fly traps' lives then some sources are willing to accept. I've read that insects are considered to be something like a dessert for fly traps but it is clear that they get essential nutrients by digesting insects right?

No, insects are definitely desserts. If I kept my flytraps indoors locked away and never ever let them see a bug in their lives, they would grow fine. They just wouldn't grow as quickly/robustly as they would with regular insect meals.

I'm unsure if insects make a difference in maximum trap size for when a flytrap reaches adulthood, or if a lack of insects would simply take it longer to reach its maximum size.


hooofi wrote:Second of all, those numbers regarding amounts of eaten insects are rather suspicious meaning they don't seem accurate. 30% of ants? Those must be really big ants. I'm posting a photo taken recently, it is only natural and topical to previous posts.

Published scientific papers have to be based on careful study, so I assumed it was accurate, at least for the area stuied. Ants come in all sizes and are very common ground critters. In some areas ant traffic is going to be VERY high, and that in conjunction with the fact that ants travel around collecting food daily, in droves, makes this very plausible. Even a small ant can trigger a larger flytrap's trigger hairs.

It's possible that the flytraps studied happened to live in an area of NC that had a higher ant population than other areas, skewing the results a bit.

-  Sun Aug 05, 2012 9:35 pm #150526
With all due respect I still find that hard to believe. Even when infested with ants, venus fly traps are just not designed to catch ants. I'm not saying they don't I'm just not convinced of the numbers. There are too many question marks to claim that one third of their food consists of ants. Could people who grow their plants outdoors comment on this, please?

-  Mon Aug 06, 2012 1:33 am #150540
Over the winter months the only insects my VFT's trap are ants, as my plants go dormant they produce smaller traps and these are constantly close due the ant traffic, the larger traps left over from the Autumn are relatively left alone due to their size, the ants just stay around the edge of the traps where the nectar is, on the larger traps this means they're further away from the trigger hairs.

Veronis wrote: * Softer-bodied beatles such as ladybugs are generally not a problem, but can occasionally kill a trap due to their chitinous elytra (wing covers)

I've read this a few times and just noticed this...is this a subtle reference to the band or just a miss-type?

You are creating a great collection of how-to's and general info. Always easy to follow yet highly informative.
My Grow List

I would like to see a spider being caught and trapped with my own eyes. I mean it seems very unlikely, doesn't it?

Well, having problems posting today for some reason, so here is another try!

When you look at the size of a Daddy Long Leg spider, you will likely think it's too big for a VFT. I know I did.

Then the most interesting thing happened, while my and my wife were having dinner outside, we got the rare chance to watch a Daddy Long Leg spider get into the trap and caught by one of our Jaws VFTs. Those long spider legs twitched for what seemed like forever before going still. Much like your picture, when the trapped closed, the spider legs were outside the trap and trying to pull itself out. Amazing that the plant won the battle!

As to small spider's, this is pretty common to see, or least I've had good luck in seeing VFTs get them.

"The dionaea, one of the most wonderfull plants in the world" Darwin
"La nature ne fait rien sans objet" Aristote

My Growlist
My Wishlist

-  Sat May 18, 2013 12:52 am #176489
I have a couple comments.
1. I've seen some of my plants have a growth spurt after I fed a trap, as would be expected. But although there were many new leaves, all the traps were very tiny. I figured the plant had gotten enough nitrogen so that it didn't need to expend energy making big traps for the time being. So I was a bit surprised to read in part 1 that well fed plants made bigger traps (or something to that effect.) I don't know if other factors were involved in my case, it was long ago.

2. I expected to see earthworms on the list of things not to feed these plants. One of the things I fed my first flytrap was a small earthworm. It was a bit too big so I cut it. Even so, the piece kept trying to crawl out of the trap and I had to sit there with a toothpick pushing the worm back into the closed trap for quite a while. I would have understood if the trap died from all the abuse, but the whole plant promptly died! I knew not to feed them ground beef, so I assumed earthworm meat must be similar, in some ways, to beef.
Leilani

There are tropical and temperate sundews. Tempera[…]

My father-in-law used to tape the return envel[…]

I have [spectablis x ventricosa] x maxima seeds in[…]

Um, I guess they are rather expensive. And I do[…]

The little I know about Capillaris seeds is that t[…]

Sorry for the inconvenience.