I bought 50 or so seeds of the Drosera Spatulata(Ivan's 3-way Cross I think) and planted them about a month ago in Mosser Lee Long-Fibered Sphagnum Moss. I know it's not the best but I don't have much money to spare at the moment so that's all I have to work with for a while.

I thoroughly cleaned the media with hot water as advised on a few sites and used distilled water in the final step to make sure no minerals or anything else remained in it. I then sprinkled the seeds on top of it. I used a 50-50 mix of the moss and perlite in one of them and the other has 75-25 so it's mostly sphagnum moss. I used two small plastic potting containers from Walmart(they're 5-7 inches tall), removed the bottom fake tray and then used plastic containers as the tray, filling them with about an inch of water(I had used a ziplock bag as the tray temporarily until I got an extra container). 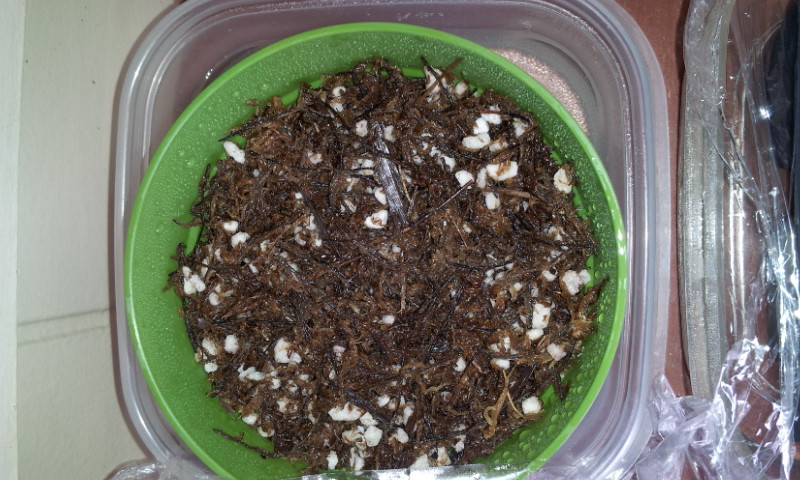 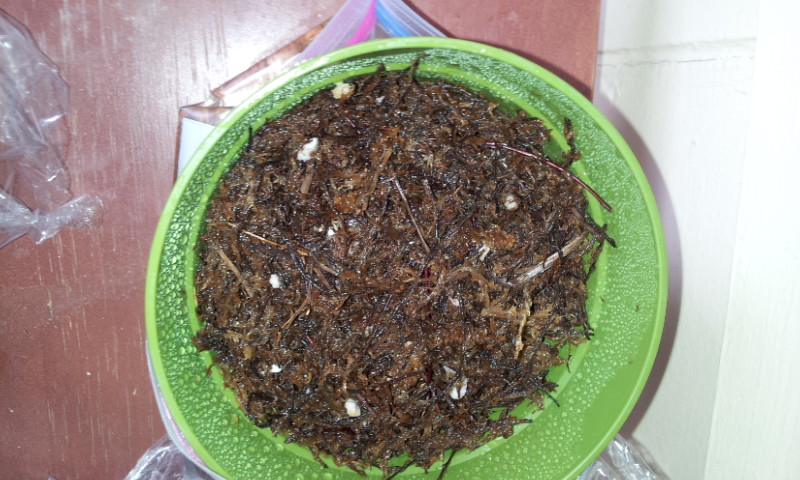 Since I didn't use all the seeds I decided to spread the remaining ones on this small potting container I found at work where they usually put flowers when bought in bulk. It has four small areas so I filled each with the same mix, spreading the seeds on top and putting a tray under with less water since they're just about two inches tall. 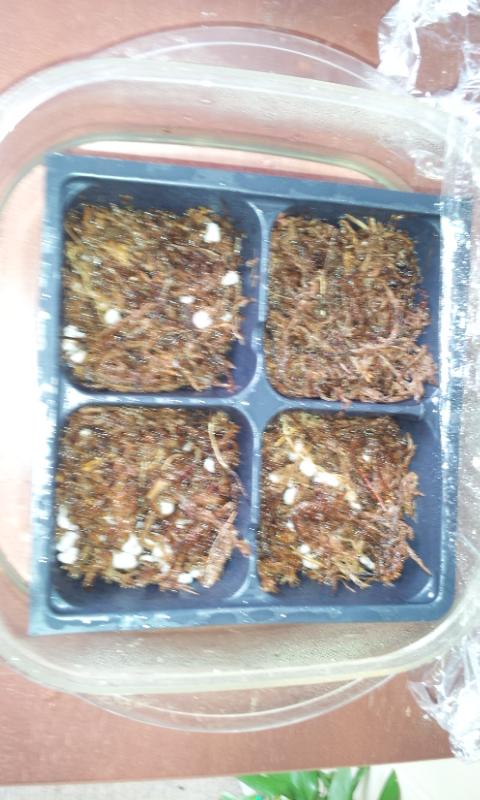 After that, I had them all sitting outside on the balcony. I saw many people used Saran Wrap on their pots to increase humidity so I did the same until a few days ago. I made sure to poke a few holes in them and they have condensation every morning. It's been about a month and there's nothing growing in any of them...not even any algae( saw a small green algae spot before but it was gone fast). I guess at least I know I did everything right when cleaning the media if not much algae hasn't developed yet.

I am a bit worried that maybe they weren't getting enough sunlight(until a few days ago they had NO direct sunlight at all, it's always shaded) and that I killed the seeds.

Two days ago I decided to remove the wrapping and I just put them downstairs on a table I have in a spot where they get direct sunlight from noon until 7pm with the Sarracenia plant my girlfriend got me a week ago.

I took this picture before fully moving them to the first floor(before fully getting rid of the wrapping): 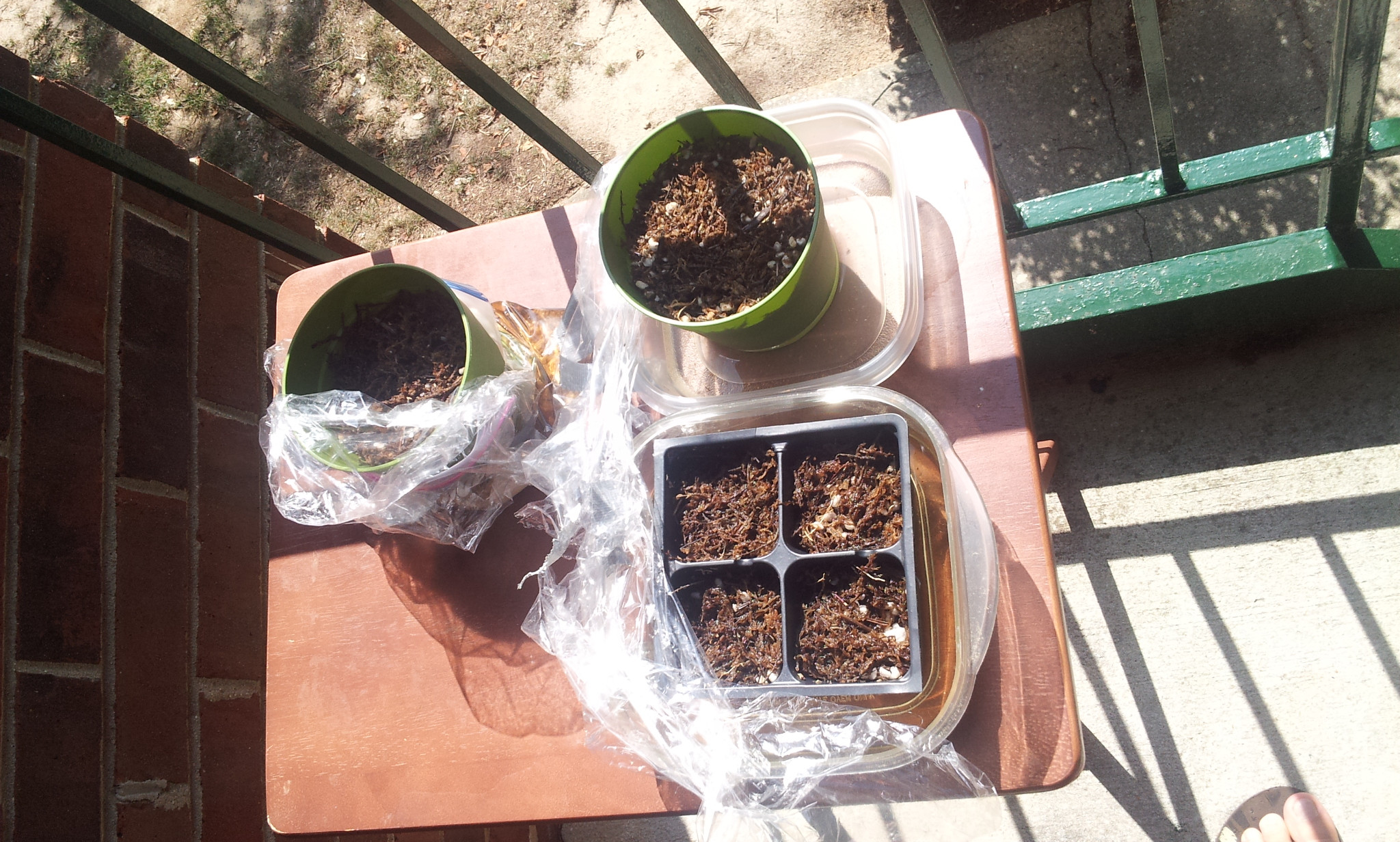 What do you guys think? Did I end up somehow killing the seeds due to heat(it was getting up to 95F in the area, I live in Georgia) or was it just that they weren't getting enough sunlight? Do you believe they will grow now that they get direct sunlight and better growing conditions even though they've been in the moist conditions for a month? Any chance at all that at least a seed will germinate? I'm to the point I'm considering buying more seeds and sprinkling them over to verify if I messed up before.

Any help will be greatly appreciated. Thanks again,

-  Sat Jul 26, 2014 11:57 pm #208469
I'm not an expert on Drosera (Sundews) BUT I do know that many Carnivorous Plant seeds need special treatment such as slight singing with fire in order to properly germinate... But I'll leave that to the experts which should be showing up.any minute now!
kronos1996 liked this

-  Sun Jul 27, 2014 12:04 am #208471
Drosera spatulata does not require stratification or scarification and will readily germinate if the seed is fresh/viable. Your setup seems fine to me. It might be too hot to be safe, as seedlings can easily dry out if not covered or overheat if covered. While the heat shouldn't affect germination, I would move them to a location that is less intense (perhaps shadier or airier) so that you don't lose any seedlings by accident. The seeds should be good in bright shade provided it is warm.

Drosera seed can germinate in a few weeks to a few months depending on the freshness. It may be that you acquired old or bad seed. If fresh, the seeds of D. spatulata should germinate within a month. You can either wait for a while longer to see if you get germination or you can start again with fresh seed (members on here should be able to supply some).
fattytuna liked this
Flickr
Growlist/wishlist

I thought my setup was at least barely decent but as time went by I began to doubt it. Hopefully it isn't too hot...I moved them to a spot where sunlight isn't as intense so I hope it works.

The guy I got them from(ebay, I think his name is Kevin Pyrtle) said in the sale page that they were collected in May.

Quote from the page:

"This seed was collected in May, 2014. All seed is refrigerated after collection. Listed count is a guaranteed minimum - packet will include at least 40 seed."

He has a lot of good reviews so I'm then worried it was some error on my side.

Hopefully now that they're receiving direct sunlight they'll germinate. Even if it's just one I'll be happy knowing I got it to grow.

I also posted on that forum where trades/requests are made on so hopefully I can get some extra seeds soon...I still have some media left so I could still try that. Thanks again!

-  Sun Jul 27, 2014 3:32 am #208496
Hey where are you in Georgia? I'm about 45 min. South of Atlanta, I live in McDonough which is very close to Conyers, Covington and Stockbridge. Feyetteville and Peachtree City are about an hour west of us... I'm delighted to find another GA grower! For many Carnivorous Plants the high heat and humidity can be quite advantages!

I'm in Augusta Georgia. Moved here last year from the Caribbean and ever since I stumbled upon a few VFTs at Lowe's in the first months I was here I've been obsessed with carnivorous plants.

Sadly they didn't survive very long due to my lack of experience(plus lots of algae and probably tap water) but it just reinforced my resolve to try to have my own little canivorous garden and learn as much as I could about them.

I'm still very inexperienced(and broke, which slows my plant growing skills) but I love them all. I saw a few of the pitcher plants and Droseras they have at the Columbia zoo in that bog garden and the obsession grew further! I'm glad the climate here's good for their growth. I can't wait to get some Droseras(either mine finally germinating or buying a plant). The Sarracenia my girlfried got me as a gift a week ago is also finally getting some colors(and a lot of bugs).

Have a good day!

Amazing selection Drosera and Sarracenia (American Pitcher Plants) and their prices are the best I've ever seen! They offer young Pitcher Plants in bulk at .59 for 1-2 inch tall and 1.09 for 3-4 inch tall. Mixed varieties and hybrids, so a great way to bolster your collection!

I bought a few seeds and small plants from some members today so I'm really looking forward for the next few weeks.

I just have to figure out where to get some cheap sphagnum peat moss since all I have as media is Perlite and Mosser Lee Long Fiber Sphagnum Moss and I've seen some members don't like that media by itself much.

I've seen some use Better Gro Orchid Mix/Moss from Lowe's so I might have to look into that to mix it with my LFS.

-  Sun Jul 27, 2014 9:49 pm #208533
I would avoid any orchid mixes for Drosera. Stick with pure sphagnum peat and make sure there's no fertilisers. Long fibered sphagnum also works but dries comparatively easier than peat. It also needs to be changed more often in my experience (although it should last a good year).
Flickr
Growlist/wishlist

-  Sun Jul 27, 2014 11:50 pm #208540
Just buy a big-ass bag of peat moss at Home depot and a big-ass bag of perlite at home depot! Mix them 50-50 and make sure you get it nice and soaked before filling the pots and planting! Put the mixture in a large bucket or pot and stir it with the water, peat moss holds water like a sponge so it takes time to soak it properly! Make sure it is NOT Miraclegro or Scotts brand perlite and peat moss because those have fertilizer which will kill them. Use that soil mix for most any Carnivorous Plant! Shipping isn't usually too bad 5-10$ on smaller shipments and possibly higher on large shipments. Peat Moss is brown and looks like normal soil but it isn't, it is very light weight until it gets wet. Its really just ground up Spahgnum Moss... I've had good luck so far with this! Don't overcomplicate the soil mixture, just plain Peat Moss will work fine!

-  Sun Jul 27, 2014 11:51 pm #208541
BTW make sure to find out which Sundews are temperate and can survive the winter and which ones are tropical and need an indoor window or greenhouse during the winter! There are only a few cold hardy sundews I think, Rotundifolia, Capensis and Inteedia are some I believe...

Sorry for the late response-my laptop's charger's pin broke so now I have to type on my phone and it's a pain since my hands are too big and I end up pressing the wrong letters.

Is this the right peat moss at Lowe's?

The price isn't too much and should last a while! If everything goes well and I get paid on time then I'm going to try to buy this one on Thursday if it's the correct brand.

I think all of the seeds I got will grow all year long so I'm ready to bring them in around November.

I hope I can save up some money soon to gey a few decent lights since my windowsill wont be the brightest and the other too are property of our cats and their endless sightseeing.

I even got a few small plants on the way! D. Capensis, Spatulata and Tokiaensis due to arrive this Thursday and a bit of live moss! I have some seeds coming too but I can't remember the names. I think one was D. Burmanii. I'll use the pots I have now and replace the LFS with peat. I'll do the same for my Sarracenia.

Again thanks for the help! Have a good day!

So in the wild the temperatures don’t sudde[…]

I would say that it depends on whether you have so[…]

you can try filtering through a cloth, and also bu[…]

What lights do you have that vft under? If you eve[…]

Thanks for posting this! I've been meaning to get[…]