Not actually a lily at all, but more closely related to Sarracenia. There is only one species in the genus.

Originally discovered in 1841 by botanist J.D. Brackenridge, the plants are endemic to extreme Northern California and Southern Oregon USA. They are found growing primarily in mountains, commonly in sphagnum and peat bogs through which cool water is constantly seeping.

Darlingtonia has a bad reputation amongst some growers (especially in warmer parts of Australia) as being temperamental and difficult to cultivate. Given the right conditions it will not only survive, but thrive.

Above all else, the key to successful cultivation lies in keeping the roots cool. There are many ways to achieve this - from building a complex cooling box complete with fan to circulate moist cool air (Darlingtonia cooling box), using a pump and timer to regularly flush the pot with cool water, or the simplest method is to simply stand the pot in a saucer of water.

I received my first Darlingtonia in 2008 – a stolon cutting from a grower in Tasmania - as well as a clump of seedlings, each seedling measuring barely 10mm across. I was a bit apprehensive at first, as I had heard that this could be a tricky plant to cultivate and I was not sure how the plants would react to the change in growing conditions between Hobart and Adelaide - Adelaide being much warmer. The literature that I had read led me to believe that if I even looked at this plant the wrong way during hot weather that it would promptly wither and die. Fortunately for me and other ACPS members who took home some of the many seedlings, this was not the case!

My plant is potted in an 8” terracotta pot, which has been filled with a 50/50 mix of live long fibre sphagnum and perlite. The sphagnum acts as a wick to draw up water from the saucer, and the perlite assists with insulation against the heat, drainage and aeration, the latter two (drainage & aeration) are most important as they prevent the mix from going sour and also prevent the roots from rotting. I stand the pot permanently in a plastic saucer full of rainwater and water from the top twice daily to flush the compost through. The plant gets full sun in the greenhouse (30% shade in the Summer months) but the sides of the pot are protected from the direct sun.

I chose to use a terracotta pot rather than a plastic pot as terracotta is porous and the movement of moisture through the side of the pot helps to create an evaporative cooling effect. It must be noted though that the terracotta pot does need an occasional scrub to remove the moss and algae which eventually builds up and impedes evaporation. This basic setup has been very successful, even through the extreme heat of last Summer and proves that Darlingtonia can be cultivated successfully even in our arid Australian climate.

Propagation of Darlingtonia
Darlingtonia can be propagated by division, stolon cuttings, tissue culture or seed.

Division of mature clumps is best carried out in Winter when the plants are dormant, for best results, each should have its own root system. Likewise, stolon cuttings can be removed from the parent plant in late Winter / Early Spring but should have a developing plant visible at the end of the stolon. Division and stolon cuttings are the fastest way to obtain mature plants, but I have also had great success in raising Cobras from seed. I was fortunate enough to be sent some fresh seed from Oregon, USA in October of last year. Much of the seed was donated to the ACPS seedbank, but there was plenty left for me to experiment with.

My method for germinating seed was as follows :

Select an undrained container approx 4” deep with a lid - an ice cream container is ideal. Drill a ¼” drainage hole 2” up from the bottom of the container. Chop up finely, enough long fibre sphagnum to fill the container to within ½” on the top – I used a food processor to finely chop up the sphagnum much to my wife’s disgust. Level the sphagnum moss out and firm it down, scatter your fresh seed evenly across the surface and mist with a fungicide (not a copper based fungicide!), put the lid on, date and label the container, and leave in the fridge for 6 weeks cold stratification. Check periodically for signs of mould.

After 6 weeks, remove the container from the fridge, remove the lid and mist the seeds daily – do not allow to dry out. At this stage enough water can be added to the container that it runs out of the drainage hole. Leave the container in a warm brightly lit place and germination should occur within 4 weeks.

From experience, I have found that germination of seed which has not been cold stratified is sporadic and prolonged with some seeds taking several months to germinate and as always, best results are obtained when using fresh seed.

Growing Cobras from seed is a slow but rewarding experience, it will take about 3 years for the plants to produce pitchers that are between 2 – 4 inches long with a 50% increase in size each year. Pitcher size increases each year to maximum height of approx 60cm in cultivation. In nature, pitchers can reach nearly twice this size.

Fertiliser
Darlingtonia seem to appreciate foliar feeding once or twice a month during the growing season. Orchid or epiphytic fertilier (30/30/10) or Seasol – both at 10% strength will boost growth and improve pitcher size.

-  Mon May 10, 2010 6:58 pm #54179
Wow, thanks so much for this! With your permission, I might take this text, modify it a bit, add some photos and create a page on the main part of the site with it...when I get some free time to work on it.
My Growlist
FlytrapStore YouTube
FlytrapStore Facebook
FlytrapStore Instagram 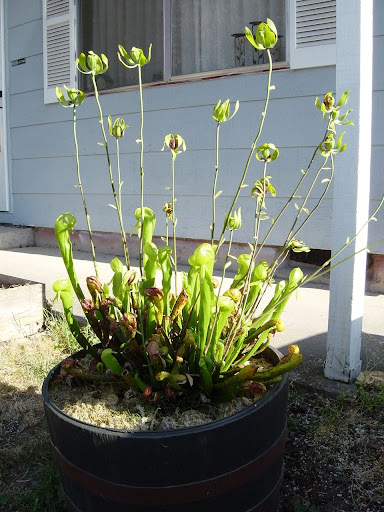 ^^There is one I grew in 2003. I got it from the ditch across hwy 101 from Mercer Lake Rd near Florence. There are lots of them there and they will widen the road one of these days. It's a shame how they have really been decimating their habitat around here recently, lots of development just south of the wayside area up into the dunes.

I grew this one outdoors in a whiskey barrel, this was in Springfield, a bit warmer, so the large barrel helped keep the roots cooler during the day. This plant kicked some butt, I sold seeds off of it for a year on ebay.
To defy the laws of tradition, is a crusade only of the brave 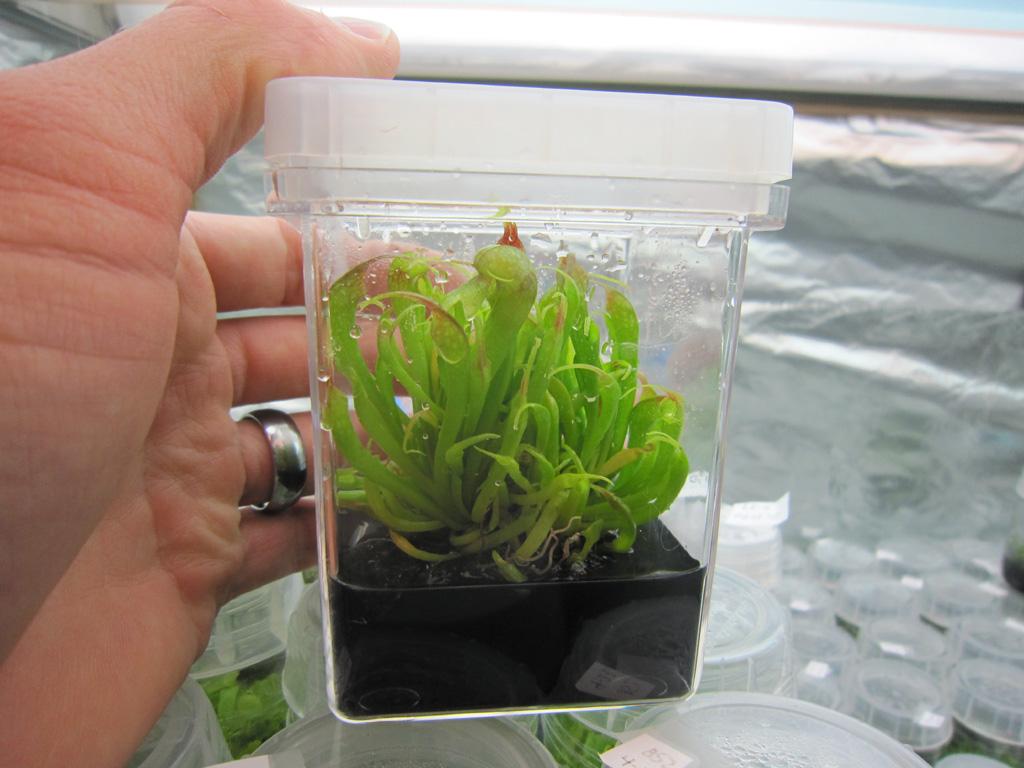 I know, I know, not fair because it's in tissue culture

I know, I know, not fair because it's in tissue culture

-  Tue Jun 01, 2010 11:00 am #57215
Excellent result for 6 months in tissue culture - is there any reason why you could not continue to replate into a much bigger flask and grow the plant to maturity?
"Vengeance is a dark shadow that
consumes all those that seek it"

linton wrote:is there any reason why you could not continue to replate into a much bigger flask and grow the plant to maturity?

Not that I know of. Space is really the only concern. Though there may be a limit to how large the plants can get in vitro due to other circumstances or conditions that I'm not aware of.
My Growlist
FlytrapStore YouTube
FlytrapStore Facebook
FlytrapStore Instagram

bright indirect light if i remember right?
so morning sun thats filtered through a gum tree + bit of shade cloth would work well?

im thinking out near the front door for morning to noon sun only, which will leave it in full shade for hot arvo' heat linton?

-  Mon Jun 14, 2010 9:44 am #59104
The grower that sent me the seedlings last year said that he grows his Cobra in dappled shade year round. But if I'm not mistaken, in their natural habitat Cobras can be found growing in full sun on fairly exposed sites. I suspect that if you can manage to keep the root zone cool, your plant will be happy just about anywhere.
linton liked this
"Vengeance is a dark shadow that
consumes all those that seek it"

Here is a mini cactus I bought from a grocery stor[…]

I have the ubiquitous subulata and have yet to s[…]