Photos of carnivorous plants other than the Venus Flytrap

I'm stealing my own thread and using it to update my collection. It has been a while since my last update, here's a TON of photos of most my plants!

N. Pastoral, there were like 4 sprouts in this pot, but I lost 3 of them due to watering system malfunction 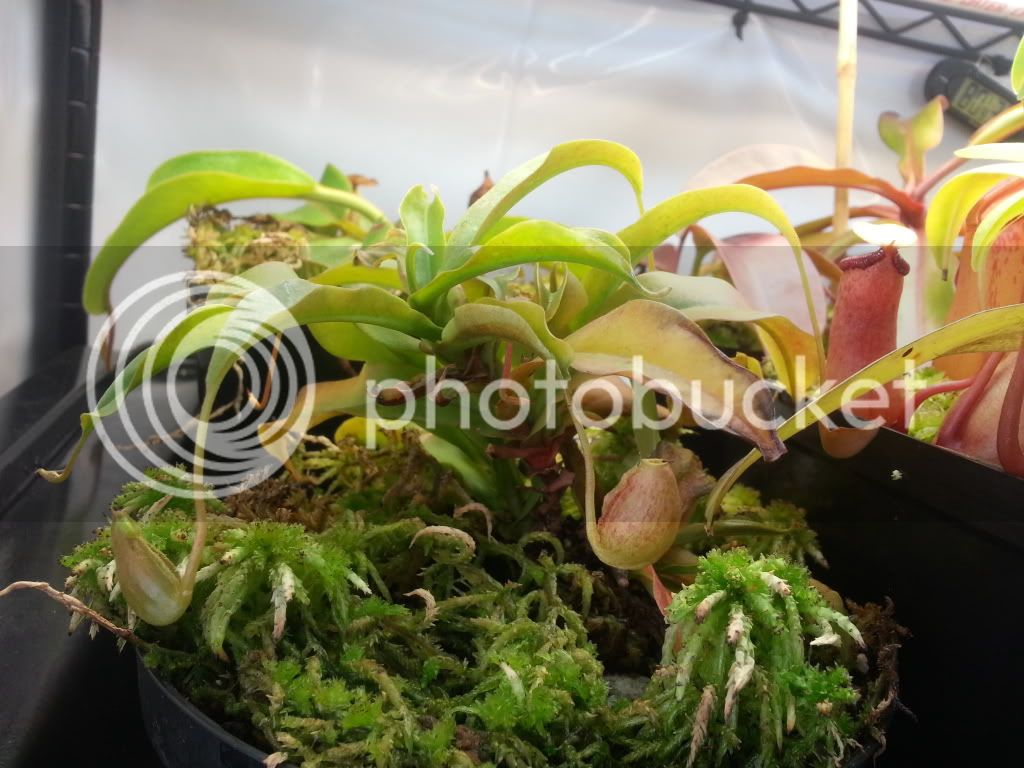 Nepenthes area, you can see the self watering system above my plants

Basal shoot from my first CP ever, N Ventricosa x Boschiana, even the shoot is putting out huge pitchers!

N ventricosa x Boschiana new pitcher coming up, this thing is HUGE and it's not done growing yet lol

N. Griffen this plant has never done well for me lol

N. ??? I bought this as a 'poi dog' random hybrid from sarracenia northwest. It has been vegging like crazy but has yet to put out a pitcher. I think it finally is going to throw up some traps.

N. Miranda out of shipping shock, and throwing up a new pitcher!

N. Alata still in shock, I hope it survives, although it looks like it has new growth coming in. 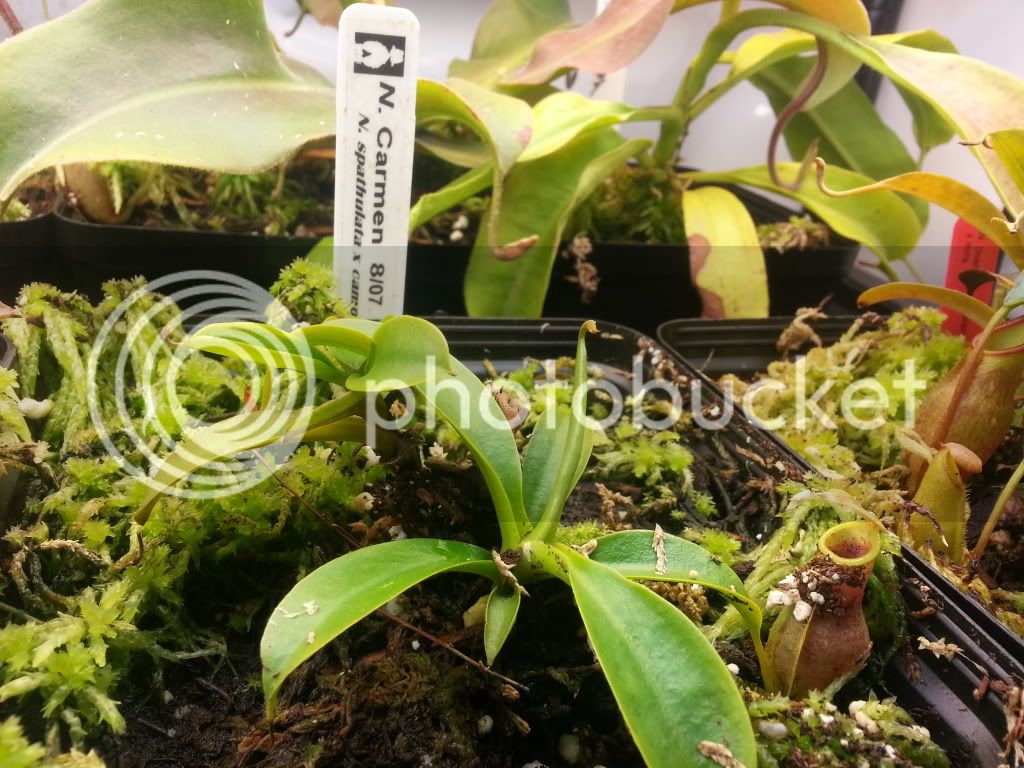 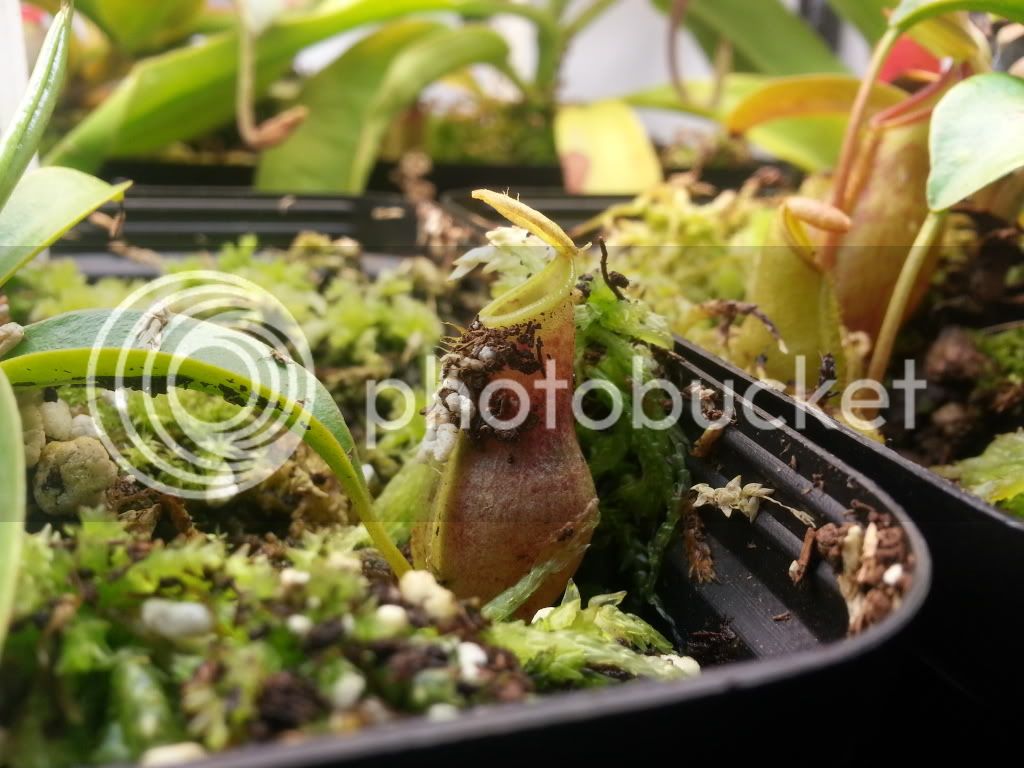 Moss that I strewn about my bog is growing like MAD!

My flood and drain bog

P. Moctezumae flower, my only ping that has flowered for me

VFT seedlings and seeds from FTS

My new cephalotus! I haven't killed this one!

D. Tokaiensis x rotundiflora plus a bunch of little baby sundews and other sundew species. any idea what that non sundew plant in the picture is?

Mystery plant in my Drosera pot. Any ideas? I'm going to let it grow because it looks cool

Two D. Adelae that died in the mail. There's now a total of 7 plantlets growing from the dead plants

N. Raven, too big for the rainforest, I'm going to build this guy it's own auto watering system.

-  Fri Oct 26, 2012 6:24 pm #156777
Sweet! What conditions do you give your Neps?
Dan Galley, Sarracenia Addict, and Trainee Horticulturist.
If you have any rare Sarracenia that aren't on my growlist, send me a message!

-  Sat Oct 27, 2012 2:39 am #156814
Thanks everyone! I just remember first coming on the forum worried about every dying leaf. I lost a few plants this summer and with a lot of tweaking to my technique I have come along way!
Garden and Irrigation Engineer
My plant picture thread
http://www.flytrapcare.com/phpBB3/pics- ... 17459.html

I've been playing with the idea of buying another kind of CP besides my favorite (VFT) - which would you say are the next best to buy and what makes them interesting in your opinion?
Giselle

-  Thu Nov 08, 2012 3:25 am #157660
Honestly, after I bought a bunch of VFTs I started getting into Nepenthes, then Sundews, now butterworts. Honestly if you want something EXTREMELY easy to grow/propagate, then I highly suggest butterworts, theyre almost impossible to kill lol, plus theyre cool looking little plants.
Garden and Irrigation Engineer
My plant picture thread
http://www.flytrapcare.com/phpBB3/pics- ... 17459.html

-  Fri Nov 09, 2012 4:17 am #157725
I tend to keep my dew soil slightly more moist than any of my.other plants. I water with the tray method. Lots of light and nutrient poor soil. That's about it. Sundews are very easy to grow.
BoothEatsBUGS liked this
Garden and Irrigation Engineer
My plant picture thread
http://www.flytrapcare.com/phpBB3/pics- ... 17459.html

-  Sat Nov 10, 2012 3:19 am #157773
Be careful not to spray water onto the sundew itself, it weakens the sticky enzymes and it can stress the plant out if it is done frequently.
pieguy452 liked this
A confessed carnivorous plantaholic

-  Sat Nov 10, 2012 6:55 am #157785
^Yeah this is also true, I was misting my dews until the leaves started turning brown, they've come back once I stopped doing that and started tray waterihng them again. Currently working on a hydroponic setup for my dews/pings.
Garden and Irrigation Engineer
My plant picture thread
http://www.flytrapcare.com/phpBB3/pics- ... 17459.html

Reply
Return to “Photos of Other Carnivorous Plants”
05 Aug

Im assuming thats where they came from. I have som[…]

Sorry, but all I can tell you is stratification wo[…]

It's kinda like a sundew. Enzymes are secreted ont[…]

thanks Dean. Envelope and SASE sent out with today[…]