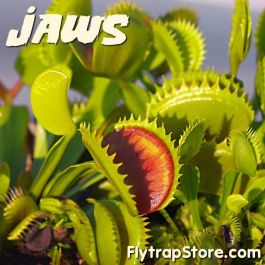 I ordered a Jaws fly trap on a tues. Is arrived the following Monday. It did have 10 mouths, but 3 were dead when it arrived (black or turning black). I paid for potted & got a root. No follow up, nothing. Tried to call & it went to VM. I have followed all the instructions to a tee, but its struggling. Also, Jaws has red mouths, my plant has not a single one! Not sure what to think. On top of the plant cost, spent an extra $30 on a pot (which I ordered) & all the things on the list. So after $55, i would expect more.

(The text below added by FlytrapStore.com management in response to the complaints above)

We try very hard not to make mistakes, but occasionally we do so, and your review is the first we have heard of this apparent mistake. Please email us at sales@flytrapcare.com so that we can resolve the issue.

Regarding shipping time, as stated here at FlytrapStore.com in the right sidebar of the homepage, we ship primarily on Mondays and Fridays, so a Tuesday order such as yours usually waits until Friday to be shipped. This is for practical reasons, to prevent the possibility that the plant would have to spend an extra day (Sunday) in storage before delivery. Regarding perishable live plants, the health of the plant is the primary concern and shipping speed is secondary. Orders shipped on Fridays almost always arrive on Mondays, as yours did, which means that your plant spent only 3 days in shipment.

Regarding several traps turning black, that is normal: a Venus Flytrap will sacrifice one or more leaves when it is transplanted, as the plant becomes acclimated to new growing conditions and as the roots slowly integrate into the new growing medium and are able to support the leaf growth as efficiently as before. This is true not just of Venus Flytraps but of many plants such as roses (the canes of which are trimmed when prepared for transplanting) and iris (the leaves of which are fairly severely cut for transplanting), etc. Regarding the observation that the plant seems to be "struggling," most plants including Venus Flytraps have a period of "transplant shock" during which they adapt and recover from the transition to a new growing medium (soil) and new environmental and cultural conditions. This is normal.

Regarding the condition of a plant upon arrival, if a package is delivered in very hot weather and not brought inside soon after delivery, the plant can be damaged by the heat. If it is not unbagged and attended to promptly, but remains in the carton, or stored in a refrigerator, its condition may deteriorate. We have no control over what happens to a plant and package once it is delivered, which is why we guarantee it only up until the point of delivery. Customers, especially those who are not familiar with Venus Flytraps or carnivorous plants, or not very experienced with caring for plants in general, can and often do make mistakes with the initial care of the plants we send. The instructions are merely guidelines and of course cannot address any and every possible circumstance or issue that may occur. The health of the plant(s) depend upon a person's own good judgement, careful observation and attentive care.

Regarding "Jaws has red mouths," most Venus Flytraps develop red trap interiors, but only under certain circumstances. The traps of a Jaws Venus Flytrap often, but not always, develop a deep red trap. Even on a plant with no red traps, each new trap may turn red after it matures, if given enough time and light and if the trap stays open.

Regarding your statement, "spent an extra $30 on a pot," the fee to pot a Venus Flytrap is just a few dollars, and the total cost of potting plus the increased shipping cost because of weight is usually under $10.00, not $30.00, so it is unclear to what you are referring. Once again, we urge you and any customer who have what they consider to be legitimate complaints to contact us at sales@flytrapcare.com so that we can work with you to resolve the situation. Thank you.
(originally posted on 6/13/11)

Back to Product Reviews