Pinguicula propagation that is FOOLPROOF

Pinguicula propagation that is FOOLPROOF#351959

That's right! I have found a way to propagate pings with about a 110% strike rate, on average. For my P. Agnata, it's more around 150%. (Numbers above 100 indicate several strikes per leaf). This method also works very well on both leaf types in the heterophyllous pings, and also works on cubans. I have not tried it on european/american pings.

Some heterophyllous pings with very small rosettes may not strike very well while dormant. However, large dormancy leaves, as seen with agnata and other pings, are very good. Trial and error helps a lot. Another problem with dormant leaves, is that they take longer to strike, and may rot off. This is partially why I prefer the bag: no problems with rot.

As twitcher pointed out, there are some factors you cannot control when striking pinguicula, but I have found that with increased humidity and temperature, pings produce more strikes.

Here are the steps:

0. Remember to feed and care for your plant prior to leaf pullings. The plant can survive half of the leaves being removed, but that is survive, and we want our plants to thrive. This also helps cuttings to strike faster. If you take pullings in the winter months, leaf pulling success rates are *slightly* higher, however, in the summer it is effectively the same because the larger leaves produce more than one plantlet. Pull whenever you like, really. Dying leaves sometimes strike, so I don't want those to go to waste.

1. Rip leaves off the plant. Gently tease downward until the leaf pops off, sometimes there will be an audible noise. If you don't catch the 'white part' of the rhizome, don't throw it away. For P. Gigantea, sometimes I have observed plantlets growing on the edge of the leaf. I didn't learn this until later: The larger the leaf, the larger the baby will be. Keep this in mind.

2. Place the pinguicula leaves into a plastic bag. Slightly blow to inflate. I either put a spritz of water into the bag, or a wet cotton bud, to keep humidity high.

3. After the leaves pop, transfer them to a 100% humidity deli cup or something of the like. I use those containers you can get chocolate almonds, flour, or bulk products in from whole foods. They're great, stackable, and all transparent. Fill this container with the following mix:

Lime, no matter how many people will say otherwise, does not seem to make a difference, and it is expensive.

4. As with TC techniques, these plants have NO waxy cuticle. The best thing to do is acclimate them, however, I have found one can repot them briskly into 50% humidity (that's my house humidity), and give water liberally. If you're in a xeric area, slowly open the lid of the deli cup, taking 1 week to fully do so.

After certain species of pinguicula flower, they divide the rosette into 2 or more. Mostly, the flat-leafed pings do this. I am yet to see any filiform varieties divide after flowering. I'm looking at you, P. Moctezumae

Carefully unpot the plant and hold one plant in each hand. Make sure that you have all of the leaves from the right plants in your hand. I have done this several times, grasping a part of the other plant, and it will fall off. If this happens, don't worry. You have yourself free leaf pullings.

Gently twist your hands as if you are unscrewing a bottle. The ping should pop off at around 15 degrees of rotation. Pot up the plants, and give 100% humidity to help them recover. Then, slowly acclimate them back to normal humidity.

You now have 2 mature pings.

This method is used for WINTER leaves, the succulent, non-sticky kind. For carnivorous leaves, refer to the plastic-bag method.

1. Carefully unpot the plant. You do not have to feed it prior to this, as winter leaves in heterophyllous species do not eat. Gently stroke the sides of the rosette with your thumb to remove dirt and loosen leaves. Then, gently pull leaves off. You can safely remove leaves until there are 3 rosettes from the crown.

Pinguicula are designed to be pollinated by hummingbirds, so if you've ever dreamed of pretending to be one, today is your lucky day.

2. Insert a fine paintbrush to the back of the flower and rub around until it is coated with pollen. Go to another (or the same) flower, or a flower on another plant (whatever you want to pollinate).

For temperate varieties, just LEAVE IT OUTSIDE unless you want to hybridize. I assure you that bees are better at their job then you are.

3. The seed pod should darken and mature.

Collect seeds and sow them in a peat/sand mixture. Add perlite to aerate the soil, to your desire. Keep in mind this is not the 'forever' pot, so it is ok. Bag the pots and give them heat and sun. Seeds should germinate quickly, within a month or so.

Some species like P. Lusitanica are annuals, and the best way to propagate is by seed. However, with Mexicans and Cubans, leaf pullings are the way to go since they grow much faster.

That's right, I said Gemmae! Some pinguicula, like Pinguicula Grandiflora, produce gemmae along the base of their winter hibernaculum. Unpot the hibernaculum, and remove the gemmae with your fingers or forceps.

Gemmae are magical things. Sow 'em and forget about 'em. Literally. Come back in 2 months, and there will be baby plants.

If you see gemmae and don't pick them, the mother plant will eventually kill them.

Some pings propagate by leaf tip or by stolon.

Stolon makers:
P. Vulgaris, and a few rare mexican pings like P. Vallisneriifolia.
Google your plant to see what it does. Wikipedia is surprisingly good. Or ask a CP buddy.

If you see a plant on a leaf tip propagator, wait until the leaf touches the ground, and pinch dirt around the baby. It should take root naturally.

If you see a stolon, treat it as a darlingtonia, heliamphora, or sarracenia. Let it grow, and cut it when it gets large.

After you take a cutting and it strikes, there will be no roots. This does not apply to runners or gemmae. American/Temperate pings tend to be easy-to root and will not need encouragement. However, Mexican pings will put roots down fast if you hold off on the water for a few weeks. This encourages a deep root system.


Pics attached are of P. Rotundiflora in a mini container, used for pasta but now for my CP addiction

I hope one of you tries this out. For now, Good Luck and Happy Growing.
HungryCarnivores.

***EDIT***
Thanks to Twitcher for adding to this guide! Hopefully we can make a comprehensive guide to striking pings!

I also turned this into a full fledged guide.

Re: Pinguicula propagation that is FOOLPROOF#351961

2. My experience has been that some pings are more likely to successfully strike based on time of year the pull was taken. For example, I was not able to get my cyclosecta pulls to strike during the winter months. Now that it is spring, however, I am getting successful strikes form them. I have seen this with some other varieties.

3. I think that multiple strikes per leaf is largely dependent on the ping variety. I see some varieties that consistently only do 1 plant per leaf, while others do multiple. Of couse, this may also depend on methodology and/or environment. I now wish I had better records!

Thanks for the excellent post.
hungry carnivores liked this
Moss Happens

Re: Pinguicula propagation that is FOOLPROOF#352027

therefore no risk with this method of attack of fungus or other.

for my temperates I simply replant the hibernacula buds

Re: Pinguicula propagation that is FOOLPROOF#352044

Re: Pinguicula propagation that is FOOLPROOF#352096

for my temperate I immediately sow them in their final substrate

for mexican and the others i always go through the method of petri dishes described above
grow list : http://fern72.free.fr/growinglist/titre2.htm

Re: Pinguicula propagation that is FOOLPROOF#352115

. I do live in California so the weather is much like Mexico, that may be a factor.
As always, good luck and happy growing

Re: Pinguicula propagation that is FOOLPROOF#352132 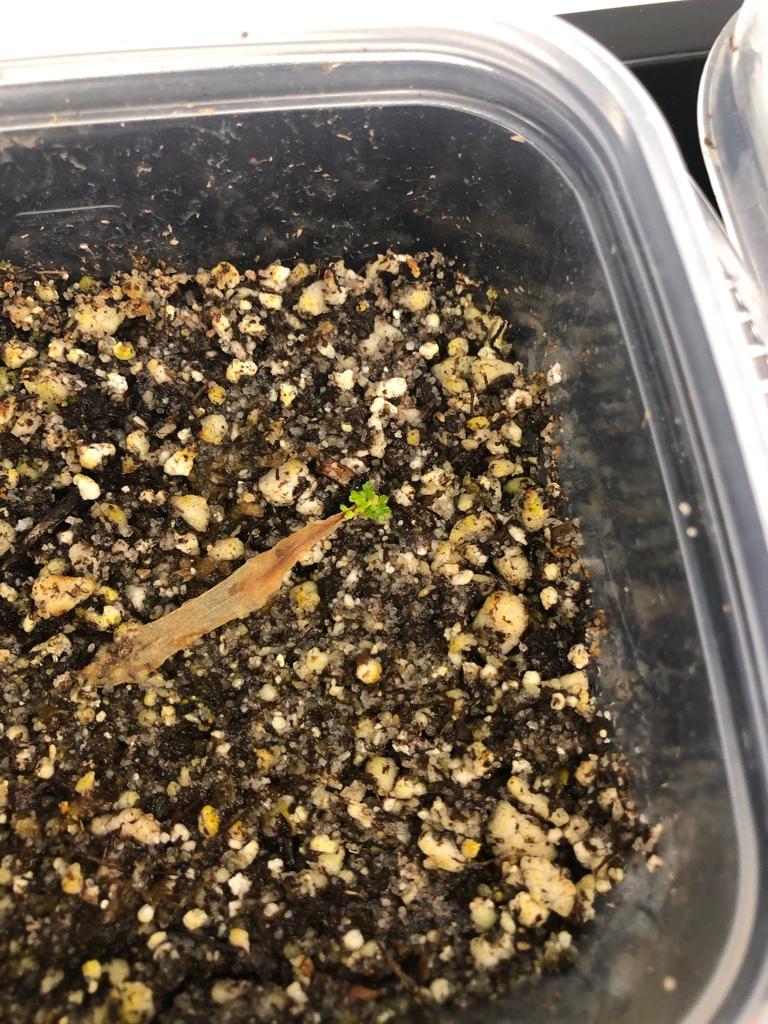 Re: Pinguicula propagation that is FOOLPROOF#352184

Re: Pinguicula propagation that is FOOLPROOF#352211

Pings enjoy the 'laisez faire' way of caring for plants. While I attentively clip and pull and repot every few months, many can just leave them. I have had friends who had pings they forgot about for two weeks make a recovery. The exception here is Moranensis, and apparently Gigantea (which I do not grow), which do not tolerate dryness too well. I guess Gigantea is kinda like a cuban pinguicula.
As always, good luck and happy growing

Re: Pinguicula propagation that is FOOLPROOF#352500

jeff wrote:for my part I use for my Mexican cuttings and sometimes for the germination of my seeds just: a petri dish with at the bottom a damp absorbent paper, I simply put my cutting on this paper I close the box and I leave the together at 20-24 ° c
jeff

That's basically what I do. I put a wet paper towel on the bottom of a plastic food storage container and place the tip of the pullings on the wet towel and close the lid. Strikes happen fairly quickly. I did several aphrodite pullings this late winter that way. SO easy.

Re: Pinguicula propagation that is FOOLPROOF#352506

this has an advantage too, little risk of mold or other viruses
grow list : http://fern72.free.fr/growinglist/titre2.htm

Re: Pinguicula propagation that is FOOLPROOF#352524

-  Fri Apr 24, 2020 4:09 pm #352524
Yeah, just make sure not to touch the paper towel before it goes in the bag/container. I had troubles with that too because I experimented with using Trichoderma in ping pots. To prevent overgrowth/kill the mold you can dip the leaves in 1% bleach for 30 seconds.
As always, good luck and happy growing

Re: Pinguicula propagation that is FOOLPROOF#354560

-  Tue May 19, 2020 9:04 am #354560
I like the paper towel method too. I use clear plastic food containers and just moisten the paper. Even if it dries the water usually condenses on the walls and then humidity stays fairly high. I get very good strike rates this way.


Sent from my iPhone using Tapatalk
tommyr liked this

Re: Pinguicula propagation that is FOOLPROOF#354588

-  Tue May 19, 2020 4:27 pm #354588
Hm cool! I've struck many pings my way, but again, it may be my location similar to the ping's habitat or something. I just recently struck a bunch of P. Gracilis, P. Aphrodite, and P. Marciano. Interestingly, for the aphrodite, I had many green plants growing off the pink part of the leaf. Never seen that happen before.
As always, good luck and happy growing

Re: Pinguicula propagation that is FOOLPROOF#354853

-  Fri May 22, 2020 5:12 am #354853
Excellent and comprehensive guide, thank you.
For leaves with wilted edges (or mostly dried leaves) with living 'attachment' areas, do you recommend leaving the dead parts on or removing them to prevent decay/mold?

A little while ago there was a thread on crossing […]

I've had great luck germinating and cloning with a[…]

Will this interminable waiting never end?

Are you doing anything special to get your plants[…]

@hackerberry , thanks so much for checking in on […]

yes it's possible I am overthinking it and becomi[…]

Q: What was the species of your first nepenthes[…]