Main Scam Seller Sites (Slammers)
-AliExpress (Mainly for CP and exotic flowers)
-eBay (Be careful on this foreign land of shops and hallucinations, you may not be able to tell reality from photoshop)

Common Scams
-"Catch Cordyceps" This seems like an innocent messy translation but what sellers don't show you is the back, it says Gypsophila Elegans, which is, well, BT
-"Blue Sundews" The peat is purple. THE PEAT IS PURPLE!! Even I can do a better job at PhotoShop than that (Not making the peat purple)
-This thing

Common Scam Item Names
If you see any of these in a CP Seed's item name don't buy it.
"Bonsai" - No, CP are not Bonsai
"Catch Cordyceps" - Probably for "The Last Of Us" fans
"Clip" - Errrr
"Giant" - Just a name
"Rare" - CPs are not exactly "Rare"
"Balcony" - Ok...
"Enchantress" - Don't eat CPs, kids
"Slurperon" - Wut
"Mix" - Every CP is different and needs different care so no hobbyist would mix seeds (Except from the same genus)

Avoiding Scams
How to avoid getting pwn'd by Scamm3rs
-Don't buy from AliExpress
-Don't buy Chinese stuff
-Don't buy colorful stuff
-Don't buy stuff with unmatching pictures (Exaggerated)
-If you can find the picture of the item on Wikipedia or the CP Photo finder don't buy it
-Only buy live plants, they're easier anyway

How To Deal With Them
How to deal with scammers:
-Post negative feedback on the scammer
-Attempt to contact them and say that the item you received wasn't as described and ask why
-Plant the scam seeds anyway to see what you get

I bought them. What do I do with the seeds?
Just plant them. Even though these are fake CPs, they are not fake plants. Here's a list of common CP substitute seeds:
-Baby's Tears (Nice "Vining bush")
-Baby's Breath (Nice flowers!)
-Dragon Fruit (Yummy!)
-Other Plants (Imagine it as a "suprise packet")

Hope you don't get scammed,
Saka

© Saka 2016-2017
PM me first if you want to use this.
Last edited by Sakaaaaa on Fri Jan 27, 2017 12:01 pm, edited 2 times in total.
Sakaaaaa, Sakaaaaa, Sakaaaaa and 1 others liked this
My plants absorb Carbon Dioxide - And bugs!
Working on a secret site..!
Growlist/Wishlist (Has some common plants!)
Send me seeds of plants you have!! (Nearly) All no-startification seeds are accepted!!

-  Mon May 16, 2016 4:08 pm #262610
In general I just tell everyone to avoid Chinese sellers, and anyone else listing the same items as Chinese sellers. They also sell on Amazon since they opened up to third-party sellers and there's plenty of non-CP seed scams too such as black strawberries and rainbow roses.

You certainly found some interesting scam seeds I hadn't seen before!

and the sad thing is, being there are obviously so many out there who believe that all these photoshopped pics are real CPs, they will continue to buy the fake seeds and these losers will continue to sell them. and I can't believe the positive feedback...but then you go look at it all and it's from like 1 or 2 people lol...
When all the trees have been cut down,
all the animals are hunted,
all the waters are polluted,
and all the air is unsafe to breathe,
only then will you discover you cannot eat money

I think they is enough private nursery's and hobbyists around to find seed or plants from, I just go to them.

Nice post, scammers love using these alluring honey pot words.
'If I was ever shrunk down and found myself trapped in a Venus flytrap, I would just sit really still' - Some guy that's just watched Honey I Shrunk the Kids

digilexic wrote:Just got "100 red mouth" seeds from Amazon. They do not look like any VFT seeds I have ever seen. I am afraid to germinate them and I am returning them.

read the reviews first
My plants absorb Carbon Dioxide - And bugs!
Working on a secret site..!
Growlist/Wishlist (Has some common plants!)
Send me seeds of plants you have!! (Nearly) All no-startification seeds are accepted!!

digilexic wrote:Just got "100 red mouth" seeds from Amazon. They do not look like any VFT seeds I have ever seen. I am afraid to germinate them and I am returning them.

Any opinions on whether or not these are VFTs? 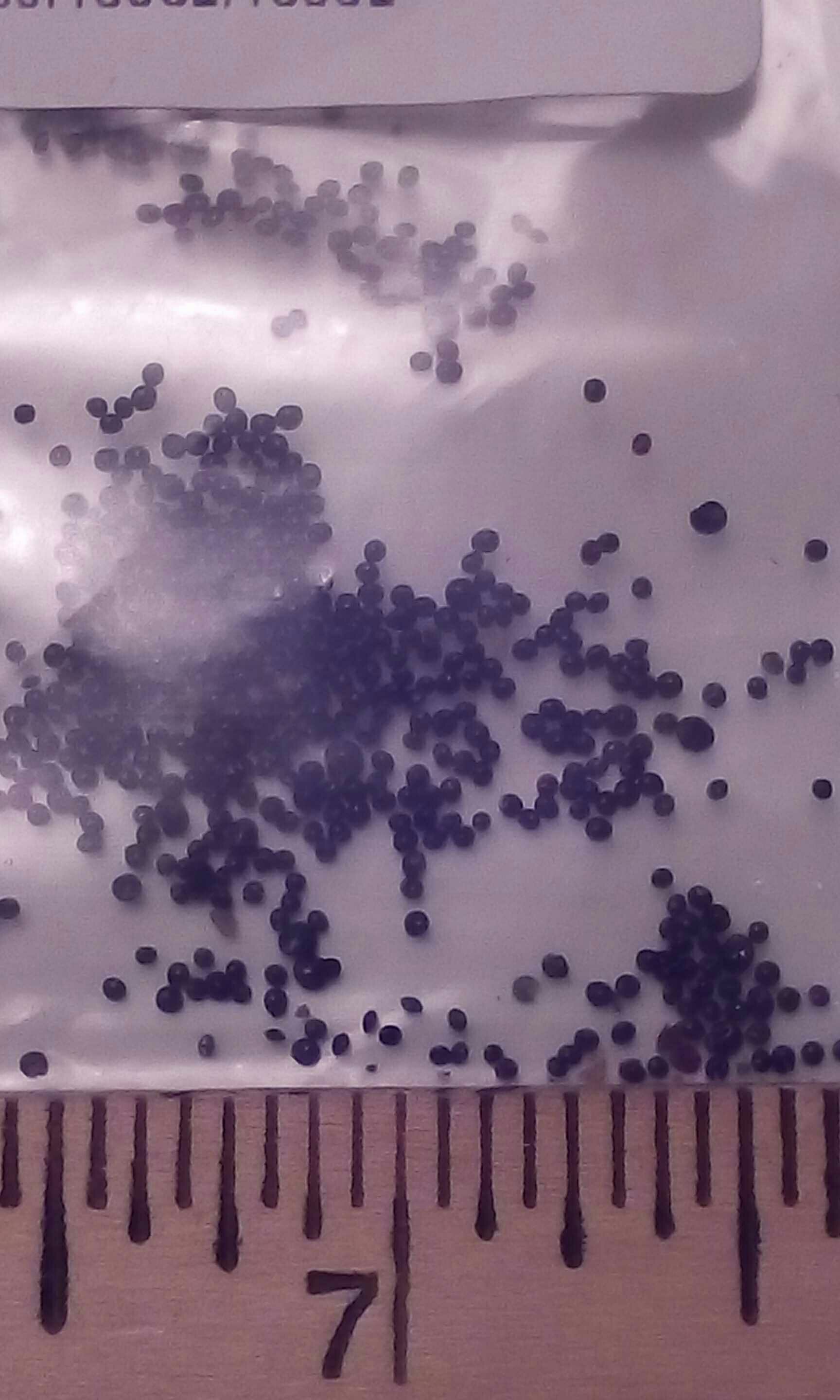 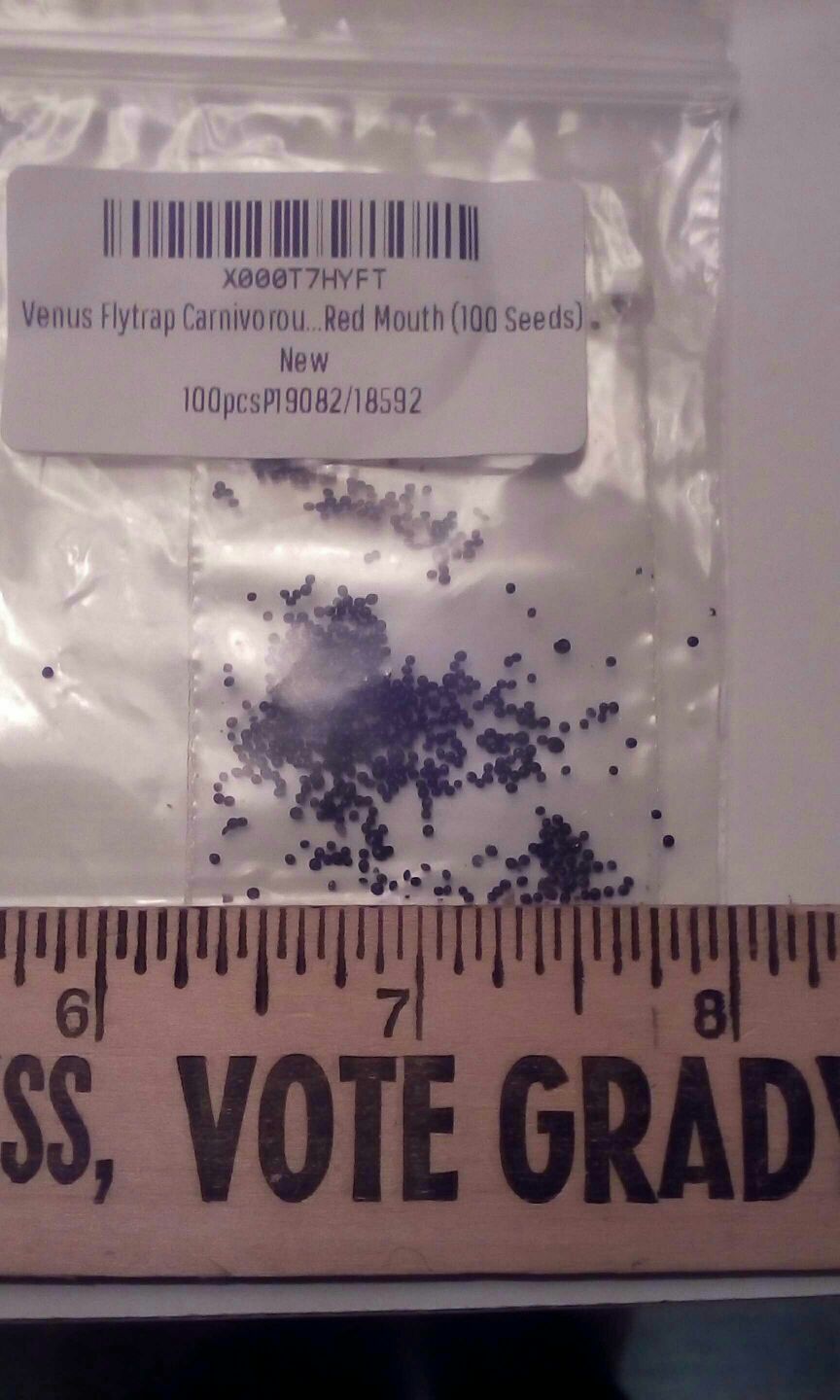 -  Tue May 31, 2016 4:14 am #263979
No, they are not VFT seeds, probably baby's tear seeds. Plant 'em anyway
My plants absorb Carbon Dioxide - And bugs!
Working on a secret site..!
Growlist/Wishlist (Has some common plants!)
Send me seeds of plants you have!! (Nearly) All no-startification seeds are accepted!!


Thanks for writing this up, too many people fall victim to these two-bit scammers

Going to send them back to Amazon. Was "fulfilled by Amazon"

Got an alien from an auction from him. The plants […]

Just a few bits of advice: If you start them out[…]

Like the title says my nepenthes first spat out a […]

That is normal. It is called, creatively enough, a[…]

Hi Ian and welcome to the forums! @Panman already […]