What do you think is wrong with my plants?

I recently bought a nepenthe hybrid, a flytrap, and a sundew. That's all that was listed on the cards where I bought them, so I can't be any more specific than that about what types they are. I thought I'd post it in this section since it's about three different types of plants.

I built a little bog environment in my front yard in a cooler (I thought it might be nice since it has a drain built in on the bottom - I can fill it up and drain it in the summer when it gets hot here in Northern California. The drain also lands at the root of my grapevine, so I won't really waste water). It's about half sphagnum peat moss and half sand, but there's also a little gravel throughout.

I have the bog sitting next to my compost bin, thinking that they would get some good snacks from all the fruit flies. So far I've only really noticed the flytrap catching anything, but I know that these plants don't need a whole lot of bugs anyway.

Anyway, I'll get down to it. When I first planted them they seemed to do great. They were growing visibly every day, and all were vibrant green. Here's a picture of the second day they were planted: 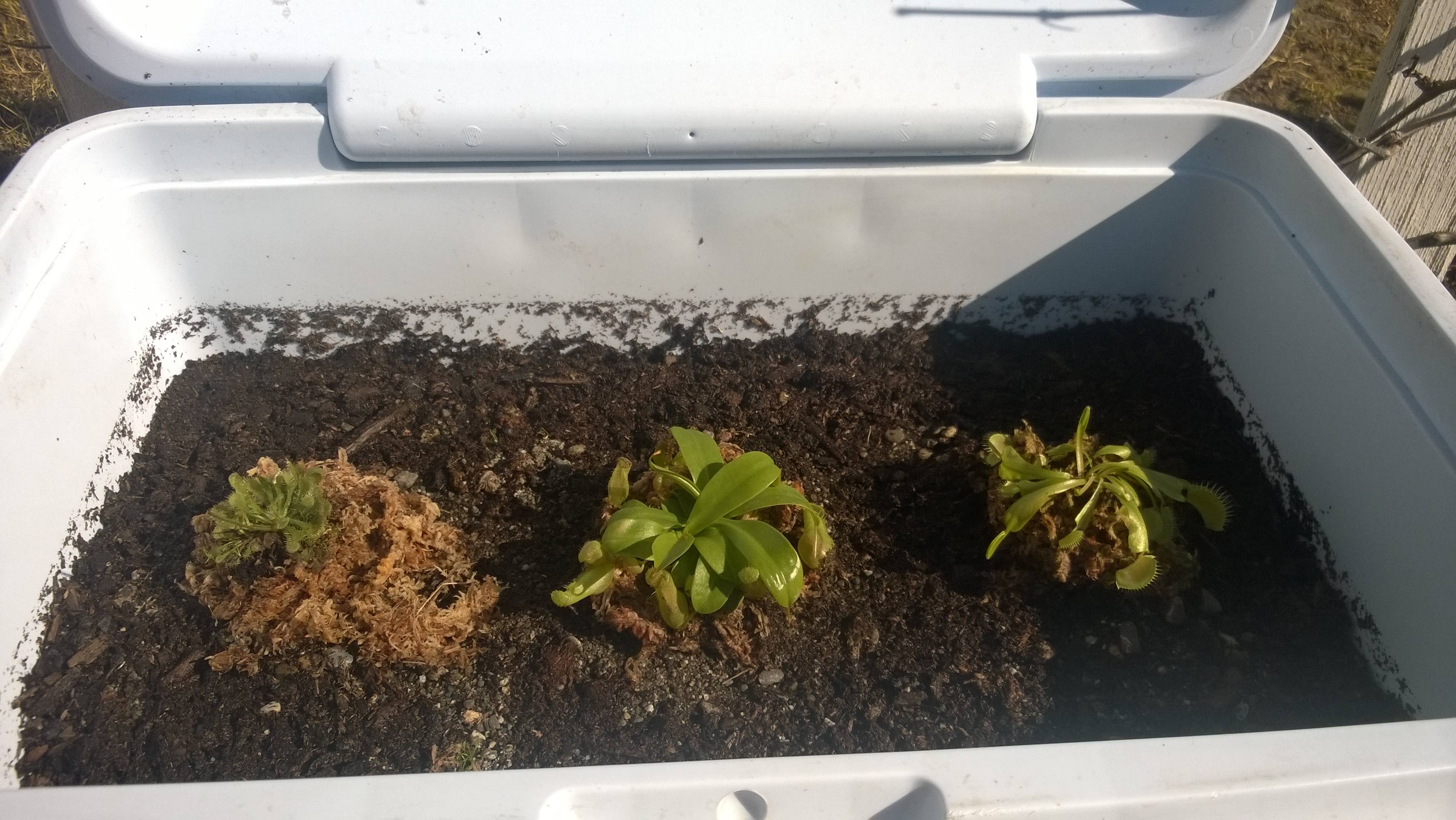 They got a little bit bigger for a while, and I thought all was well. After a while though the sundew started to turn red. I read online that that might be okay, some types will do that, and I don't know what type I have anyway. But I decided to switch the placement of the plants, taking the sundew over into the least sunlight (still many hours of sunlight a day), then the flytrap, then the nepenthe in the most sunlight. I reasoned that since nepenthes get the biggest and are the most tropical, it would need the most food and the most sunlight (it's also now closest to the compost). I also figured the sundew would probably catch bugs the easiest, so I put it farthest from the food supply.

Since then the sundew has gotten redder, and I think brownish (I'm pretty colorblind), and the flytrap also got reddish on some mouths (I also know this is not necessarily a bad thing). But then the flytrap and nepenthe started to get a lot of brown on their leaves, which worries me.

Here's a couple of pictures from yesterday: 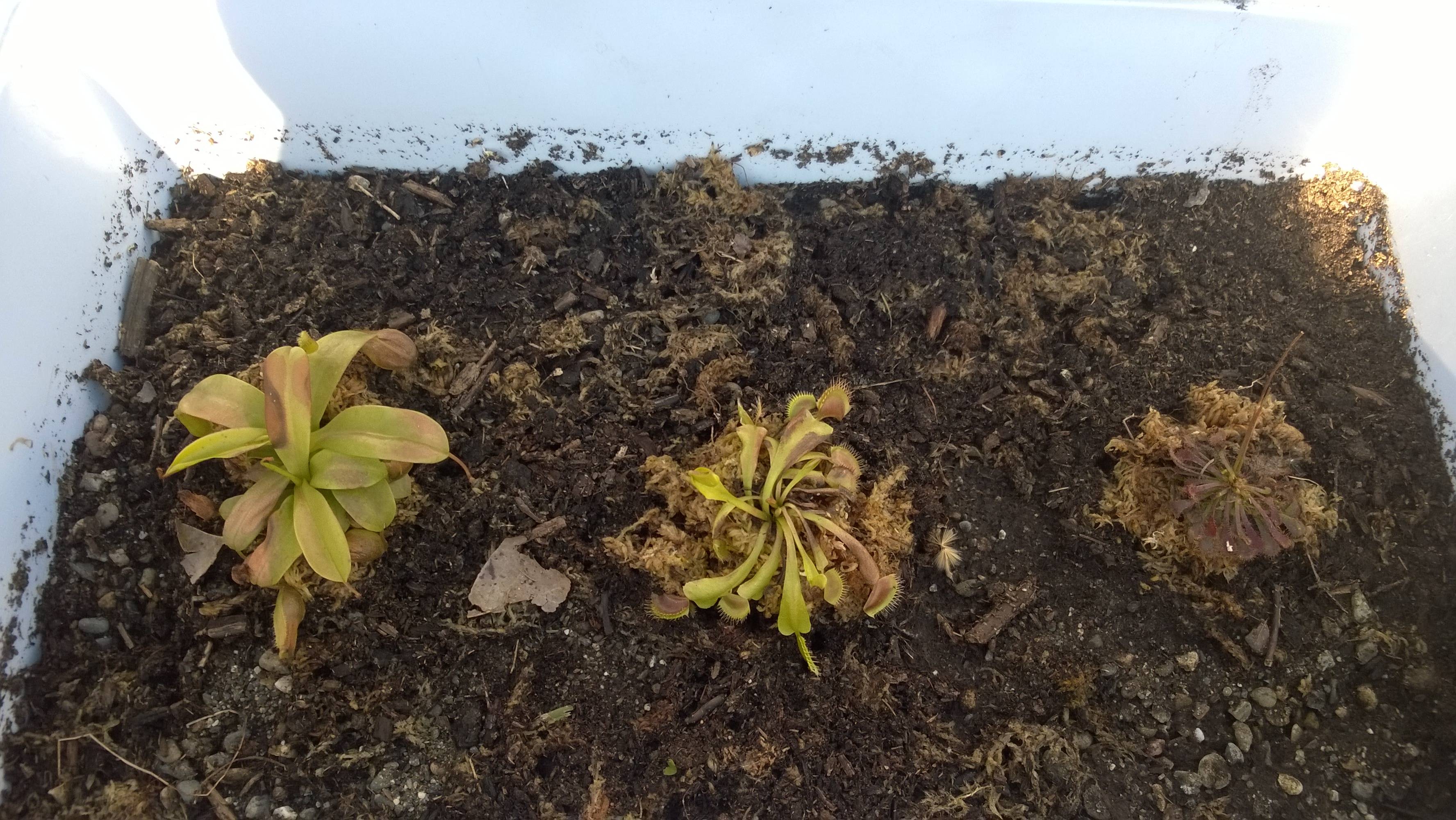 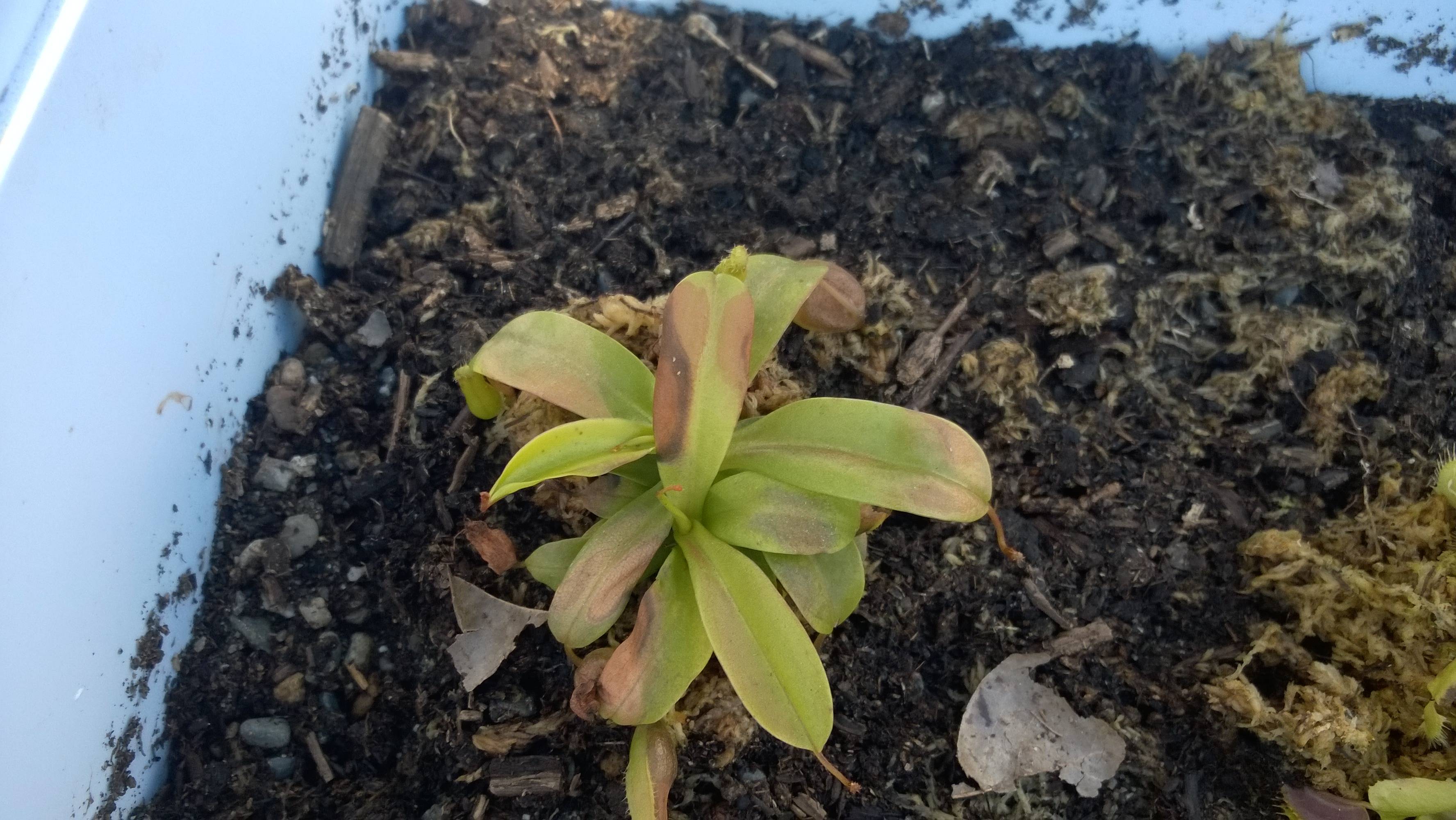 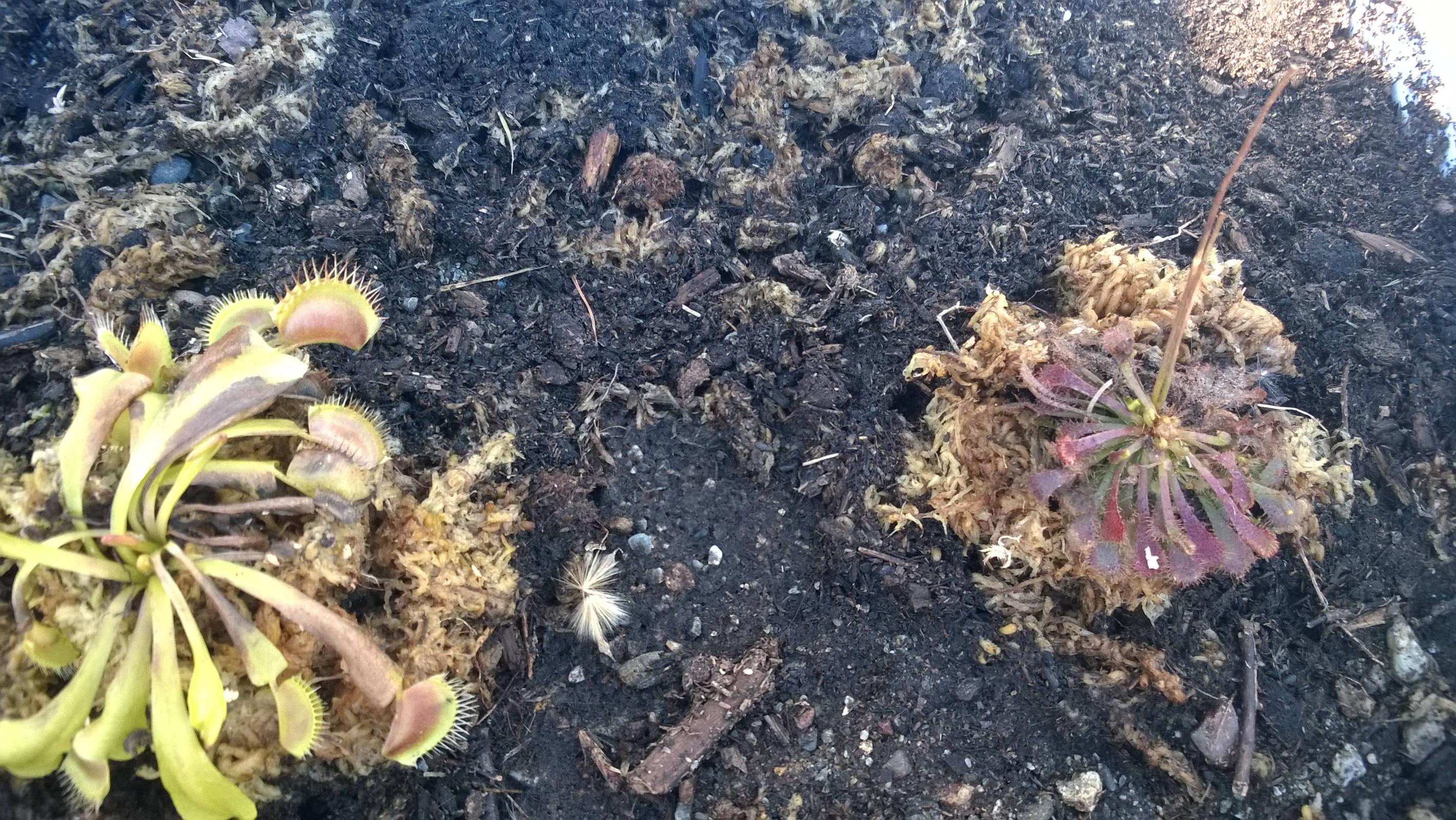 Does anybody have any idea what the problem is, why they haven't been growing as much and why they're browning? It seems like the obvious answer might be too much sunlight or heat. But it's only been about seventy here recently and usually partly cloudy. I was given to believe that the bog environment should keep them pretty safe throughout even the summer here, though I know it'll take a while for them to adjust. Maybe the lid of the cooler is reflecting too much light down on them?

I haven't really been filling the bog, since it's been occasionally raining and hasn't been that hot. But their moss has been damp all the time, at least a little.

I've seen a couple of aphids on the nepenthe, but this doesn't look like aphid damage (from what little I know), and they've been very few.

Thanks very much, anybody who has any ideas!

-  Wed Mar 02, 2016 8:22 pm #256809
Nepenthes are not bog plants and should never be treated as such. Both the Nepenthes and the Drosera (likely D. tokaiensis or something similar) are tropicals and should not be grown with temperate CPs like Dionaea. Unfortunately, most of the non-specialist commercial nurseries that sell common mass produced CPs such as these have no idea how to grow the plants, and any advice they gave you can be tossed out the window.

-  Wed Mar 02, 2016 11:44 pm #256823
usually (but not always) yellowing leaves can be a sign of too much water; the roots can't "breathe" from being too wet. kind of like if you can't breathe you turn pale...I know in like 99% of plants yellowing equals too much water...
When all the trees have been cut down,
all the animals are hunted,
all the waters are polluted,
and all the air is unsafe to breathe,
only then will you discover you cannot eat money

SerMuncherIV wrote:Nepenthes are not bog plants and should never be treated as such. Both the Nepenthes and the Drosera (likely D. tokaiensis or something similar) are tropicals and should not be grown with temperate CPs like Dionaea. Unfortunately, most of the non-specialist commercial nurseries that sell common mass produced CPs such as these have no idea how to grow the plants, and any advice they gave you can be tossed out the window.

Thanks, those look like useful links, even if it was difficult to find the parts that might be applicable to this topic.


Earthy wrote:usually (but not always) yellowing leaves can be a sign of too much water; the roots can't "breathe" from being too wet. kind of like if you can't breathe you turn pale...I know in like 99% of plants yellowing equals too much water...

Hmm that makes sense. Thank you. I could be wrong, but I think they're more browning than yellowing. As I said I'm kinda colorblind, and the truth is I also didn't take very good pictures.

Also the plants came in a little bit of sphagnum moss, so I kept them in that, which is pretty light and airy. The rest of the bog thingie is full of peat and sand, so it's much more dense than the area around the plants.


FLTropical wrote:That pitcher plant has sunburn. They are shade plants. Should only get a few hours of sun early in the morning, at most. The other two need full sun. Your soil looks very heavy too.

Ah, thanks! Sunburn sounds very plausible. Looking at that first link from SerMuncher I see that you're right. I didn't really read up on their light requirements, just saw that they're tropical and for some reason assumed that meant full sun. Well, I knew that the other two needed full sun. I'll take the nepenthe out of that box and give the other two a little more space. Do you think the same thing might be happening to the flytrap? Does it just need some time to get accustomed to the sun, perhaps? And what about the sundew that turned a reddish brownish color?

Also what do you mean the soil looks heavy? Not enough drainage? As I mentioned to Earthy the soil immediately around the plants is pure moss and seems to have pretty good drainage, but I could be doing things wrong in that respect too.

-  Thu Mar 03, 2016 1:19 am #256829
In addition to the other concerns raised, I'd be careful about putting tropical plants outdoors during the winter, even in a warmer region like California. The flytrap will do fine out there year round but the others will probably be better suited to windowsill growing.

I'm almost certain all the damage visible on the plants is sunburn. The plants look like they were raised in low light conditions as non-CP nurseries often do and need to be acclimated slowly. Definitely get that Nepenthes out of the peat since they need airier soil like what that plant came in.

Let it dry a bit, the root system might be suffoca[…]

Mine are tiny without tentacles, so I'm still unsu[…]

To get rid of the soul of the dead plant, contact[…]

Lot’s of dogmatic behaviors and beliefs in […]

I'm very conflicted. I think it's possible with w[…]

They can catch bugs, but not exceptionally well. […]