Thinking about getting a light

Thinking about getting a light#383064 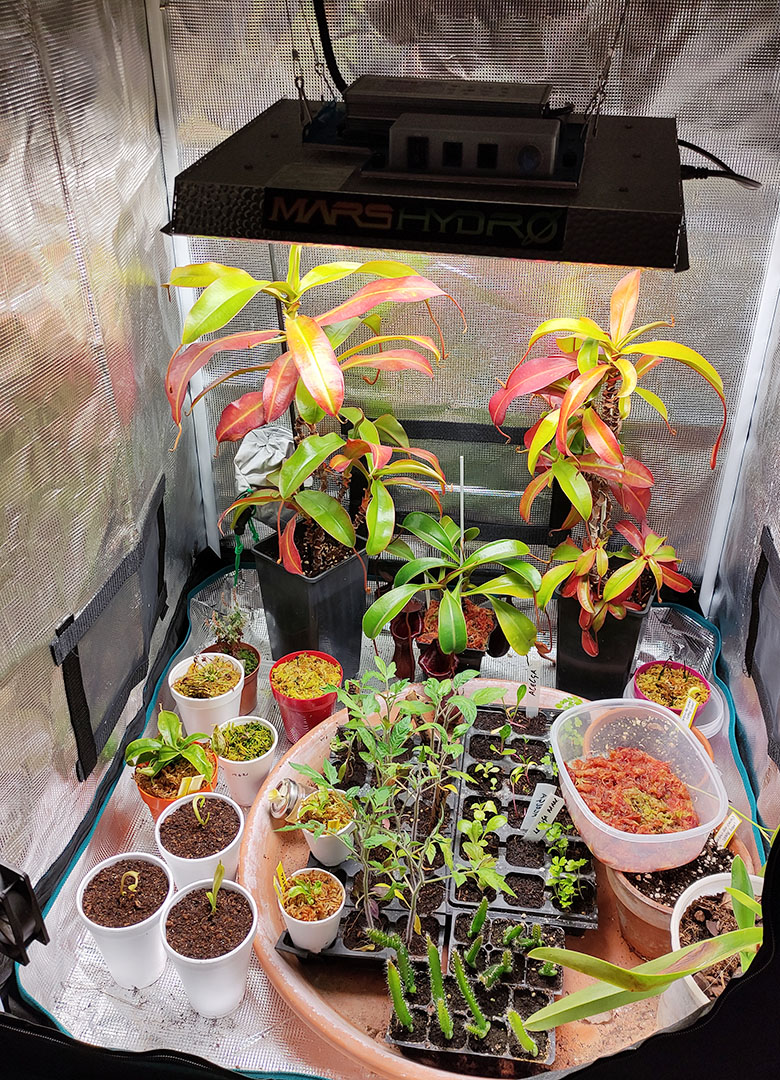 Ewreck, Supercazzola liked this
'If I was ever shrunk down and found myself trapped in a Venus flytrap, I would just sit really still' - Some guy that's just watched Honey I Shrunk the Kids

-  Sat Jun 12, 2021 5:17 pm #383105
Very nice..kinda tore between the two now lol another question does anyone grow weed with their cps? I’m wondering if I could grow just like 1 autoflower with them. I just know they get kinda big but supposedly autoflowers stay a little more compact and bushy. Just curious or if it would be better to just stick to one or the other. Also light periods might affect the cps?
Also they are pretty much the same price right now with the Mars hydro being $126 and SF at $135

-  Mon Jun 21, 2021 1:19 pm #383627
I love my Spider Farmer!! Grew some Sarracenia under it from September through April and they were the size of 2-3-year-old plants grown naturally outdoors. Some pitchers were over a foot tall by the time I moved them out to the greenhouse in May!!
Ewreck, Nepenthes0260 liked this
My Growlist
FlytrapStore YouTube
FlytrapStore Facebook
FlytrapStore Instagram

-  Wed Jun 23, 2021 4:46 am #383731
Marshydro, Spider Farmer, and Yescoms are all good brands for artificial lighting. My favorite is probably the Spider Farmer ones (I use the SF1000D model) because they really don’t produce much heat, but they are the most expensive. They produce a ton of light and I only have to use two of them to light my 3 x 6 foot tables. Mars Hydro TS-600 are good as well but aren’t quite as intense and produce more heat. Yescoms are the least intense and do produce a good amount of heat but are very cheap haha.

Although in full disclosure, I own neither. I used MH and HPS years ago (along with some REALLY CHEAP LEDs, and the original "UFO" LEDs from decades ago, if anyone remembers them, that were the first real grow LEDs on the market, were super expensive and you needed to grow plants about 2" away from them), and the GE grow bulbs (which have worked absolute wonders for me for the price). Admittedly, I need to up my light game, so I have a Carnivero Florawave light on the way, and I'm seriously considering a MarsHydro as well. A little in "paralysis analysis" at the moment between all the options though.
Grow List: topic52649.html

-  Fri Jun 25, 2021 12:55 pm #383831
How much in watt usage a Spider Farmer or any other use ?
https://roarke-carnivorous-plants.blogspot.com
https://www.patreon.com/RoarkeandRoarkes
https://www.buymeacoffee.com/Roarke

I say "advertised" because if you check youtube there are tons of people who test them out, and most draw less than the advertised rating. Some pull to 95% of advertised wattage at peak, others only to 70% or so. Some it takes a while to get to that point, others not so much.

I'll microwave my peat separately next time. I jus[…]

I would just do the pot weighing thing. For me it[…]

The pics I looked at showed a bit of yellow depend[…]

It works. Already have some plants under my bed wi[…]

I use trays, but my strays aren't very deep. Every[…]

The hitchhiker is a Utricularia, but I don't know […]