By Intheswamp -  Fri Aug 26, 2022 3:42 pm
Location:  South Alabama, USA - N31°43'59" USDA 8a/b
Posts:  756
Joined:  Wed May 04, 2022 2:28 pm
-  Fri Aug 26, 2022 3:42 pm #418953
I've got a small plant that @elaino gifted me a while back. She mentioned she got it from @optique and optique I read in another thread was talking about propagating some "trayci x Florida Giant" so I dunno if this is some of those or not. Anyhow, the threadleaf (and it's two travel buddies!) survived the cross-continental journey across the USA in a rather tough heat wave. Upon receiving it I could tell it had had a rough journey. I measured the nice and damp rootball and the thermometer was reading around 105F just after removing from the box! I planted it. The leaves all died back. *THEN* suddenly it started sending new leaves up through the crown!!!!

It has grown well and survived despite my inept care that I've given it.

I'm tickled pink with it! (Side note: It's travel partners, a D. binata and a D. tokaiensis

We've been getting some very heavy rains, enough to the point that I've move some plants under the edge of a porch to protect them some. During one of those downpours two of the filiformis leaves were "pushed" to a horizontal position...rather than growing upward now, they're growing horizontally. The leaves are roughly 7" long. I've seriously been toying with the idea of trying leaf cuttings with these two leaves. Naturally, I have questions.

I'm thinking I need to have whatever growing medium I use flooded during the rooting period. I've got some small containers I can seal with plastic food wrap.

Vertical or horizontal placement of the cuttings? It seems that you get more plantlets by laying the cuttings down and pressing them against the rooting medium. But, you are assured of good contact with the growing medium if the cuttings are inserted vertically 3/4" to 1" deep.

I'm figuring on cutting the leaves a little over 2" long...at 7 inches this would give me six cuttings to possibly get some plantlets started with.

Temperature and lighting are a definite gray area for me. Doing my growing outside I'm at the mercy of the elements. I'm thinking open-shade for lighting (no direct sunlight). Temperature will be whatever nature has in store...we will be leaving the 90F's in September, moving through the mid-80Fs, and entering sub-80Fs in October. Night temperatures will be moving from the low-70Fs at the beginning of September to the low 60Fs by the end of the month...in October we could see 40Fs but most likely 50Fs.

*If* I decide to set up a single grow light in the old trailer, what temperatures should I shoot for? (Yeah, another whole can of worms here.

I tried water propagation a while back with some other sundew leaves...they weren't in the best shape and so far has only resulted in the water turning a bit yellowish-green.

Oh, and last thought... This doesn't seem to be the best time of year to be propagating...going into fall and all. But, I figure these leaves will probably be damaged if they keep laying around so I don't feel like I've got a lot to lose.

-  Fri Aug 26, 2022 4:39 pm #418957
Your best chance of success with leaf cuttings is with new, actively growing leaves. The older they get, the less likely they are to strike. I just put them in a tube of water and once the plantlets are produced, transfer them to the growing medium. Alternatively, you can put them in a pot of peat/perlite topped with a layer of chopped sphagnum. Keep it very wet and high humidity until the plants have a few leaves and then back off on the water. Once they are established, back off on the humidity.
Intheswamp liked this
----------------------
Panman's Grow List
Panman's Etsy Shop - PreyingPlants
Find me on Instagram - PreyingPlants
Toes in the water, ankles wet, and knees damp. 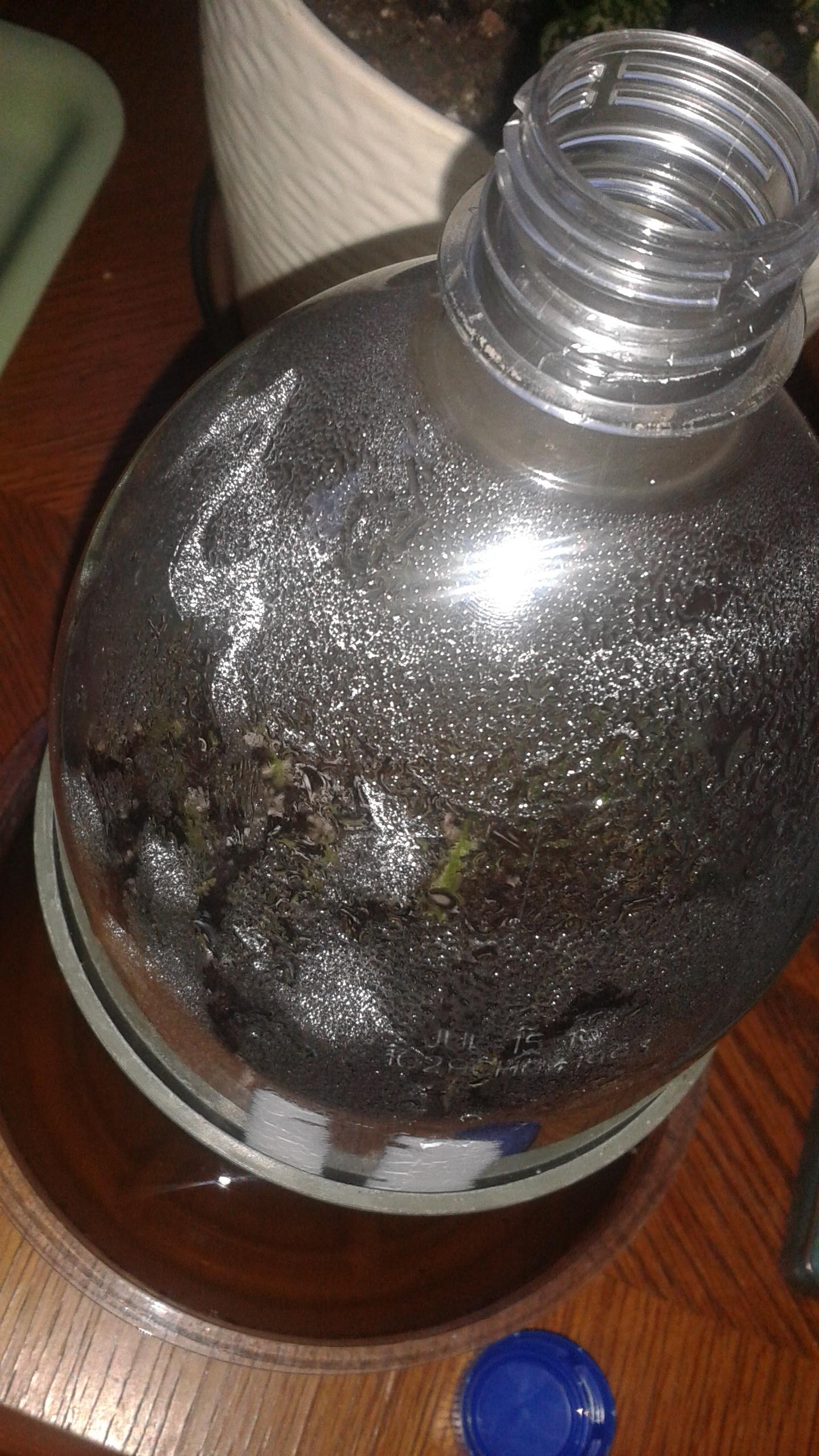 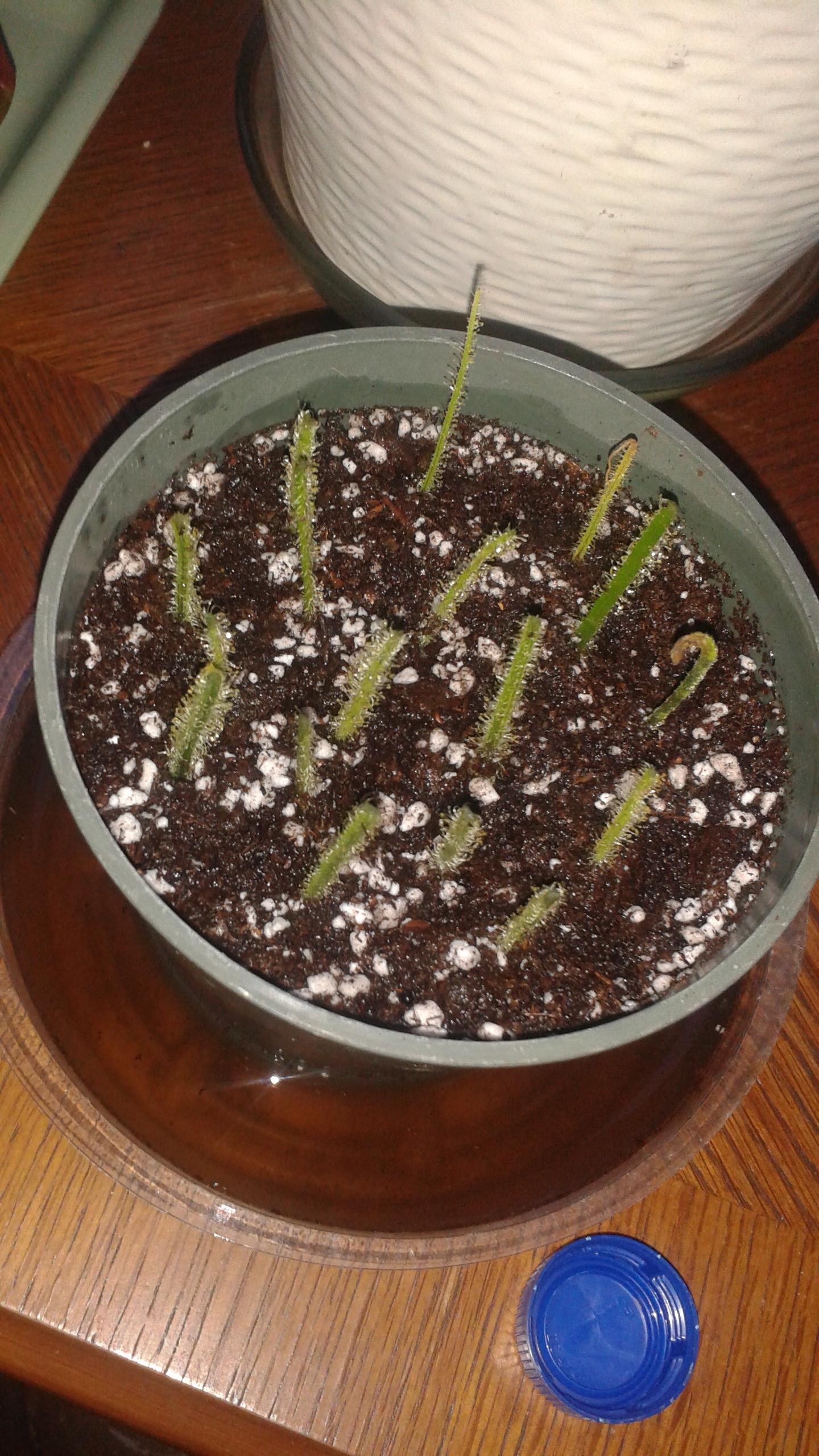 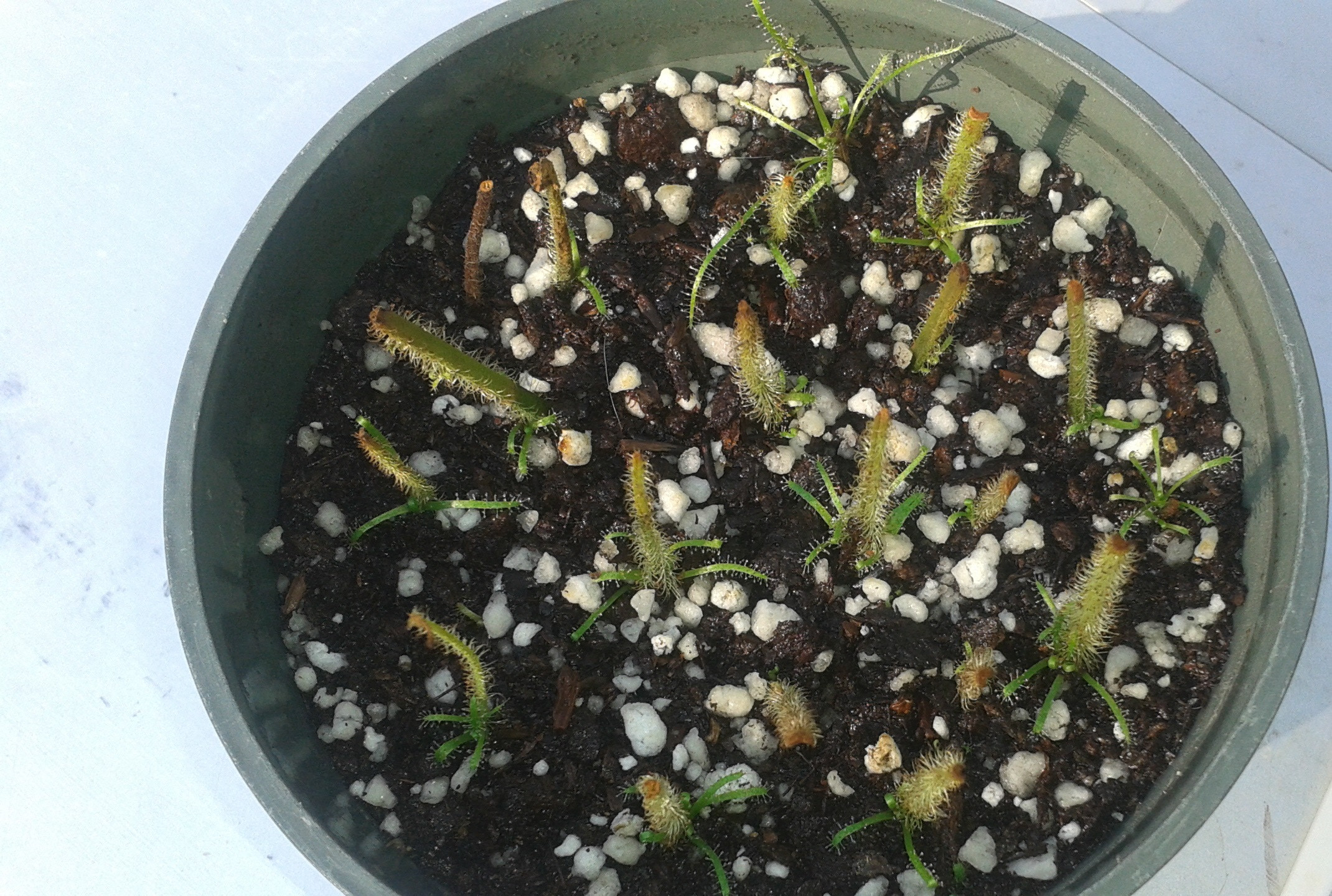 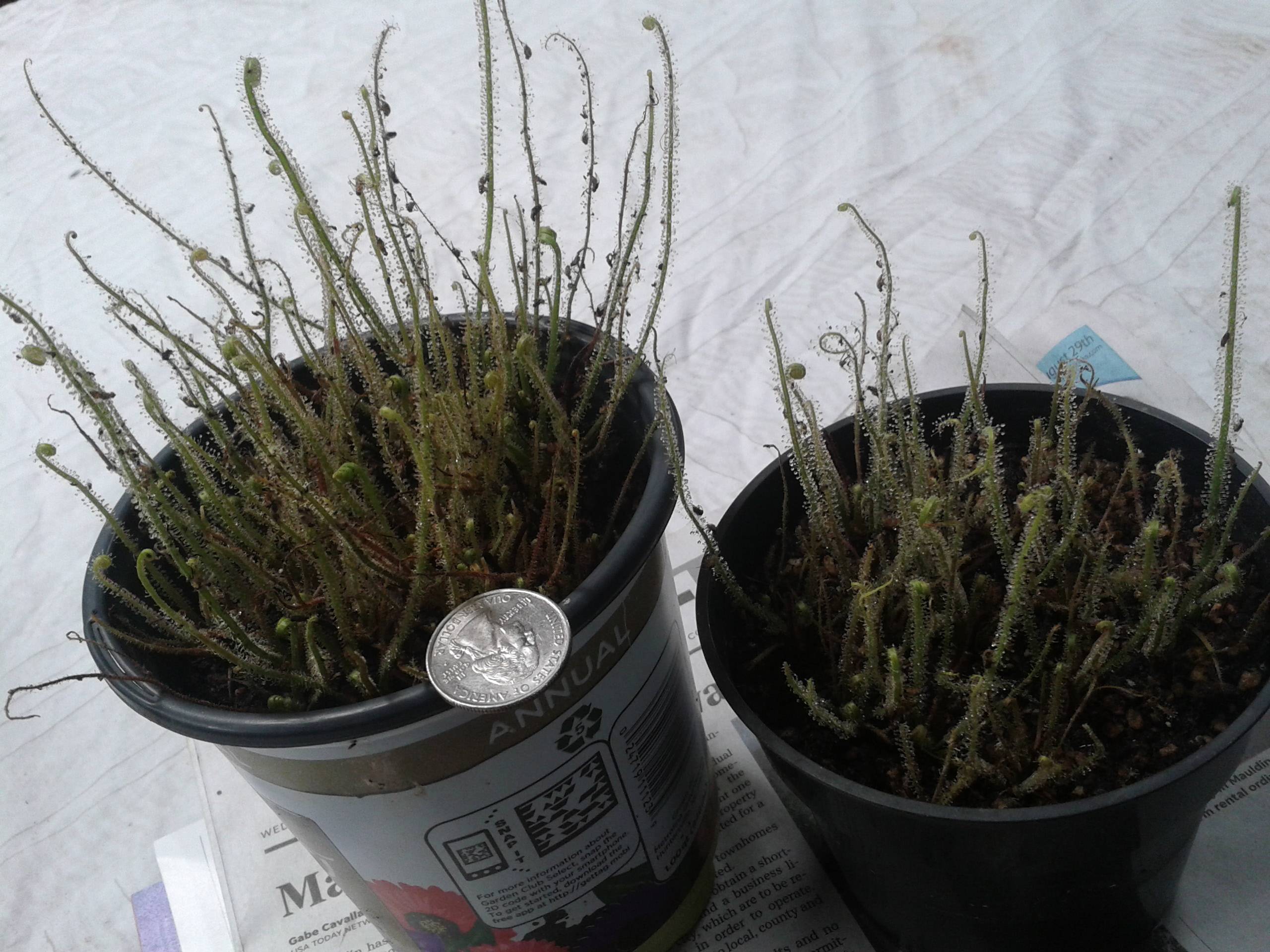 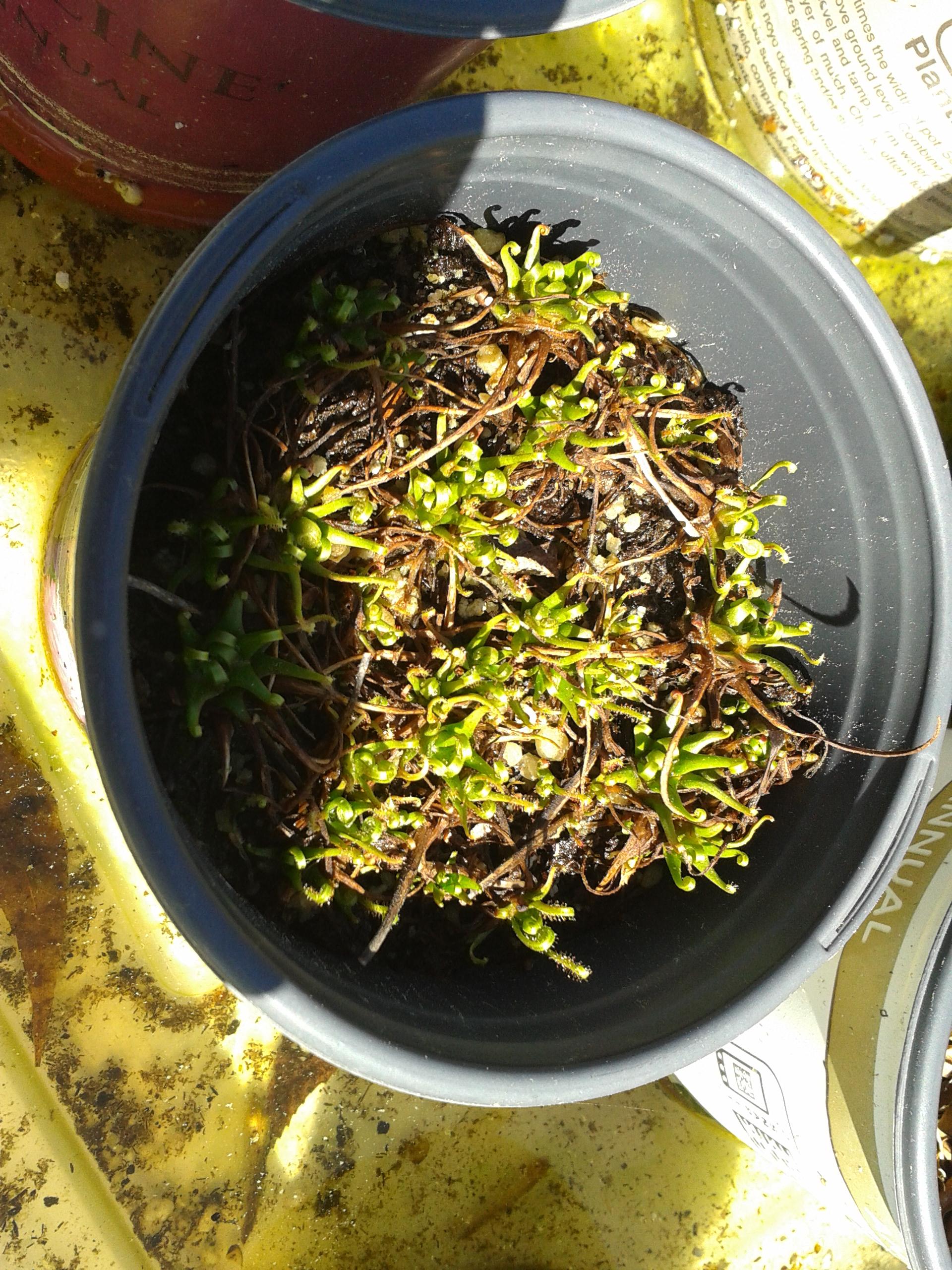 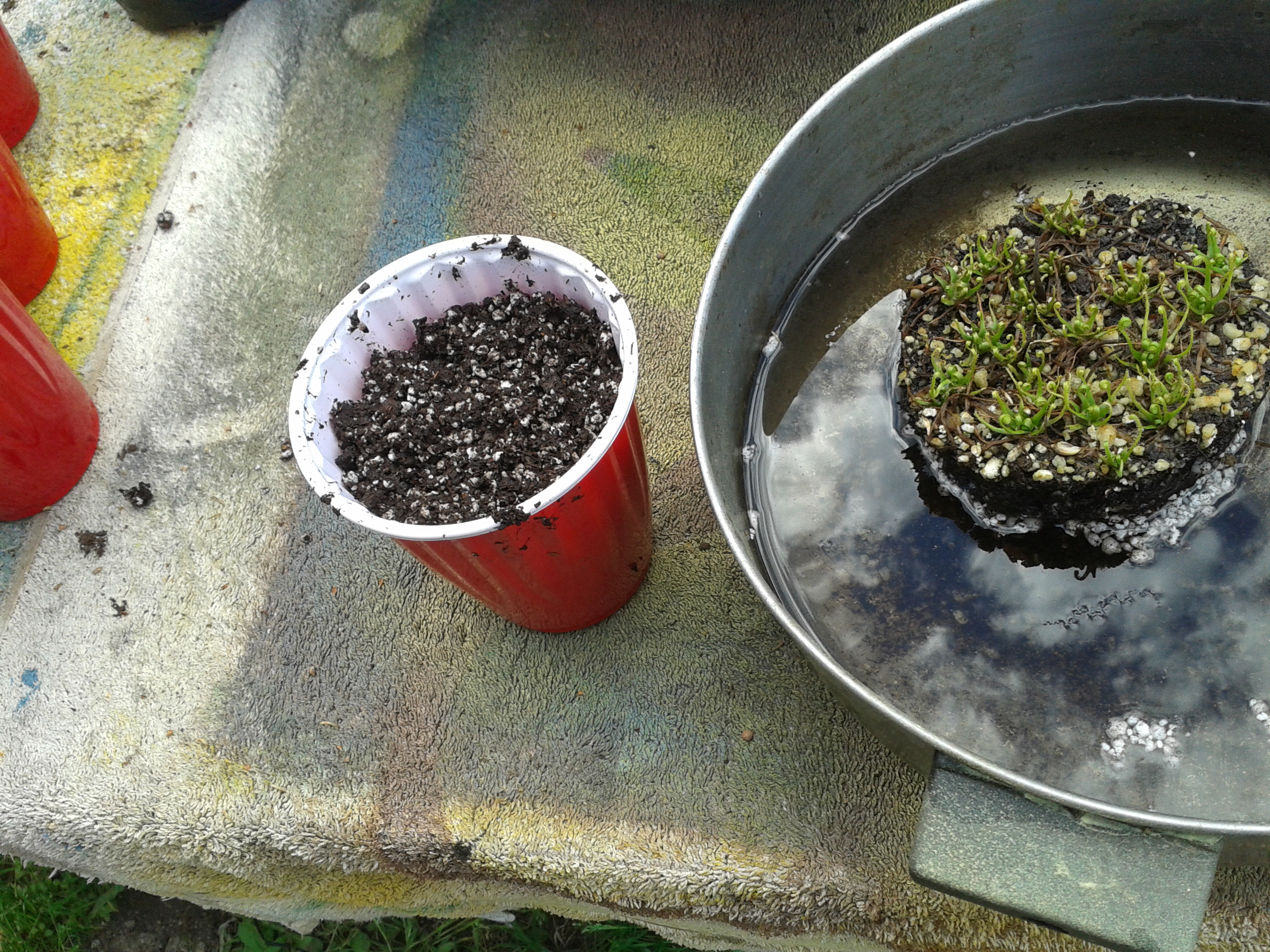 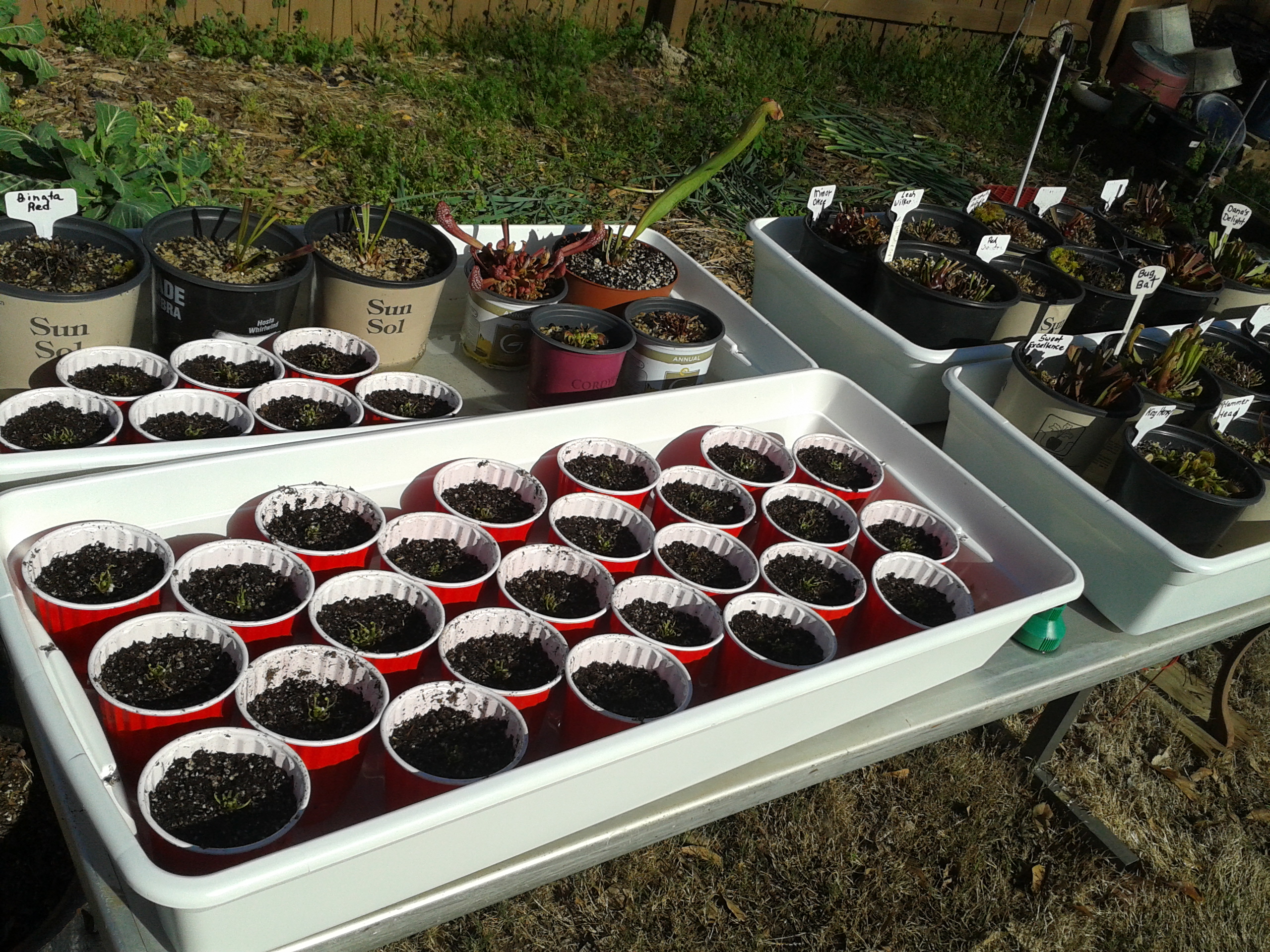 Do you think using the vertical method results in larger, smaller, or about the same sized plantlets as other methods?

-  Fri Aug 26, 2022 6:11 pm #418966
The way i think of it is the cutting is a battery for the new plants they just suck the life out of it. If you lay the cutting across the media you would have a great deal more plants but having to split that battery they would not look like the 30day photo above in the same amount of time.
Intheswamp liked this

Panman wrote:Your best chance of success with leaf cuttings is with new, actively growing leaves. The older they get, the less likely they are to strike. I just put them in a tube of water and once the plantlets are produced, transfer them to the growing medium. Alternatively, you can put them in a pot of peat/perlite topped with a layer of chopped sphagnum. Keep it very wet and high humidity until the plants have a few leaves and then back off on the water. Once they are established, back off on the humidity.

Thanks, John. The leaves that laid over seem to be in pretty good shape but aren't fresh, young leaves.

ETA: Never mind about the technique, Mike. I see in the link I’ve already put you through a Spanish Inquisition about your leaf cutting propagation!

I do have a question about the brown ends of the live sphagnum moss you said you used. I have some sphagnum growing in a plastic tray. Are you referring to the lower layer of brown moss below the upper green growing tips?

Thanks again for all that good information!!!!

Intheswamp wrote: ↑Sat Aug 27, 2022 1:45 am I do have a question about the brown ends of the live sphagnum moss you said you used. I have some sphagnum growing in a plastic tray. Are you referring to the lower layer of brown moss below the upper green growing tips?

Yes, the brown part on the lower end of the strand. It might appear to be dead, but it isn't. I have a medium-sized starter bowl full of live sphagnum that sprouted from the brown ends.
Intheswamp liked this

I first put roughly 1-1/2" of rinsed Better-Gro moss in the bottom of a roughly 6"x6" plastic container. I think pulled a "chunk" of live sphagnum moss out of my moss box...this included the full depth...green top all the way down to the brown bottom. There's roughly 1-1/2" to 2" of the live moss. The brown and green was mixed up a good bit...not really intentional but I think it'll work ok...I hope.

Next I cut two dewy leaves into roughly 1-1/2" long pieces and pressed them into the flooded moss. The plastic box has a hinged lid on it and closes loosely if it's not latched...I turn the lip of the latch inside so there's no way it can seal completely. My next step is to find somewhere to put the box so it can get good daylight but not get baked in the sun.

I'll be happy if I get three or four new plants from this endeavor...more than that and I'll be plumb ticked!!!!

Any comments are welcome...and much appreciated!

I will try neem oil first because it is safer beca[…]

Received. Thanks so much!

No no. Not exactly, that was a different convers[…]

Welcome Kevin! Make sure to check out the seed ban[…]

Aquascaping provide a sanctuary for peace of mind.[…]

Happy for his youth then lol