By somerandomband -  Tue Oct 24, 2017 4:38 am
Posts:  134
Joined:  Sun Oct 22, 2017 3:00 pm
-  Tue Oct 24, 2017 4:38 am #306065
I have two clamp lamps on my carnivorous babies. Each has an led bulb with 120 volts and 13 watts. One is red and one is blue. I did this because I read that red led light is good for growing the plant tall and blue light is good for bushing out the plant and in combo are supposed to be a good team.
My question is should i add a white light for the full spectrum? A member on here said they need more light for sure.
I plan to get at least 2 more clamp lamps or save up and get a big ol' overhead with the full spectrum but for now I only have these two (the third one is on my cannabis plant). Should i skip these all together and get two full spectrum leds?
Currently my nepenthes and two of my vfts are doing really well with this setup. What do you experts think? :3
Here's a picture:

The cost isn't much when you consider all the lamps and separate bulbs you have to buy. I was in the same boat as you, by the time I bought all the housings and bulbs I would end up spending just as much if not more than just buying the MarsHydro.
Fieldofscreams liked this
Mistakes were made

Also so it’s not really a good idea to separate the spectrum onto individual bulbs because it’s hard to make sure each plant gets the full spectrum that why in your picture one side is getting mostly red and the other side mostly blue!

Overall it would be cheaper to get a marshydro 300 but you would have to group your plants up together instead of spreading them out! Also you will have to find a way to hang the light above your plants!

But if you already have the Lamps, I would suggest the full spectrum bulb which also has IR and UV! I Included a link down below!

On a bulb based system they usually lacks in lumens/par! So you have to have them closer to the plants! But they are really good for micromanaging the amount of light one plant gets if your lamp is adjustable! Here’s a picture of my Venus’s-flytrap under a full spectrum LED bulb at a distance of 5 inches! 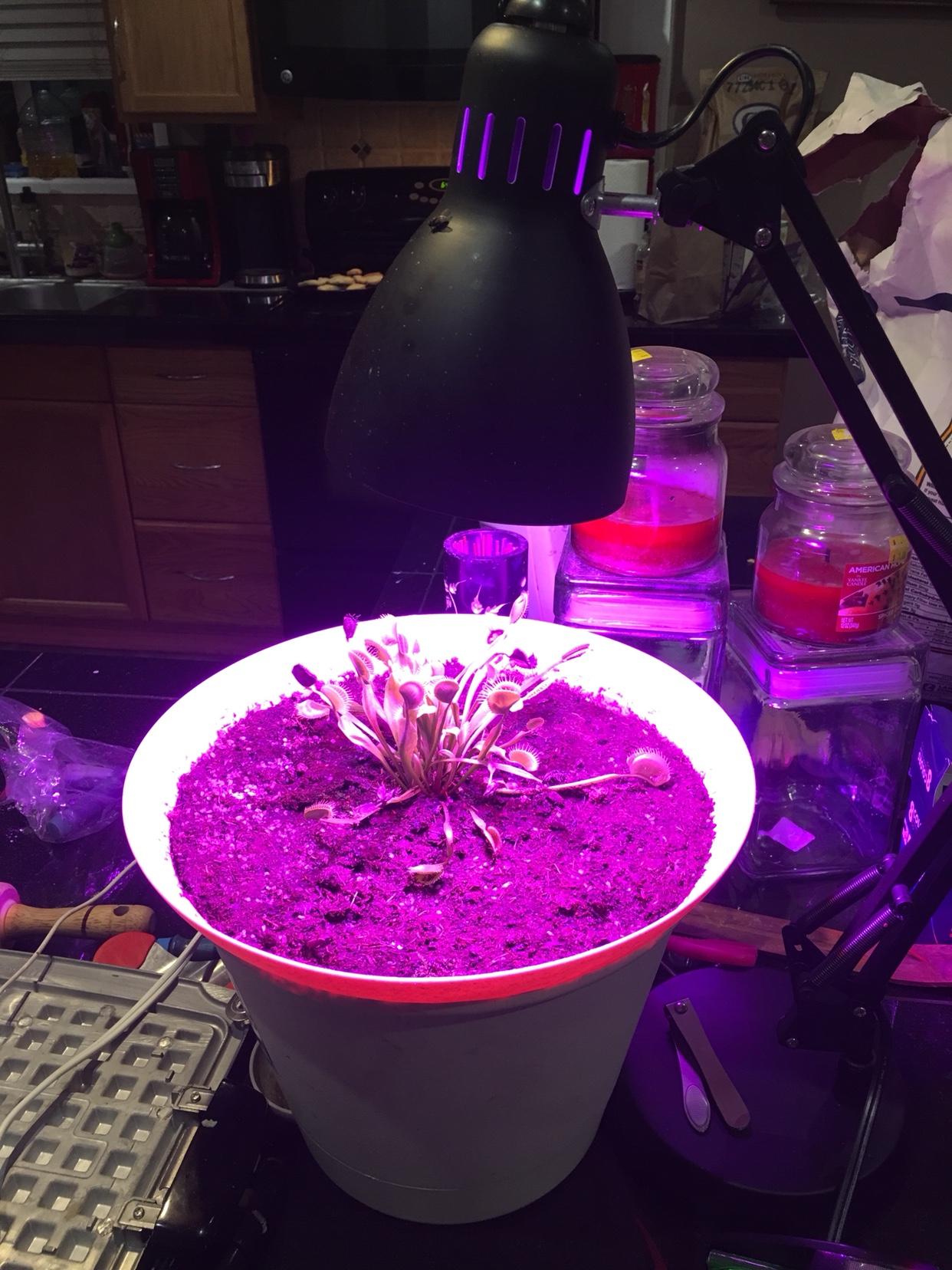 The Mars Hydro is a good choice to kind of spread out the light like a all-in-one solution granted you cannot micromanage as easily! It is recommended to have the light at least 18 inches away! Though according to the manufacturer their Optimum light/par spread is about 2‘ x 1.5‘ at 18”

-  Tue Oct 24, 2017 4:33 pm #306085
I'd just stick with white lights personally. That way you can actually enjoy looking at your plants and I have heard reports from a few people that some sticky plants do not grow properly under red/blue.

Here’s my vft before and after! Under a 6500k fluorescent bulb that output 1600 lumens! The light had to be 4 inches away!

The day I brought it home from Walmart: 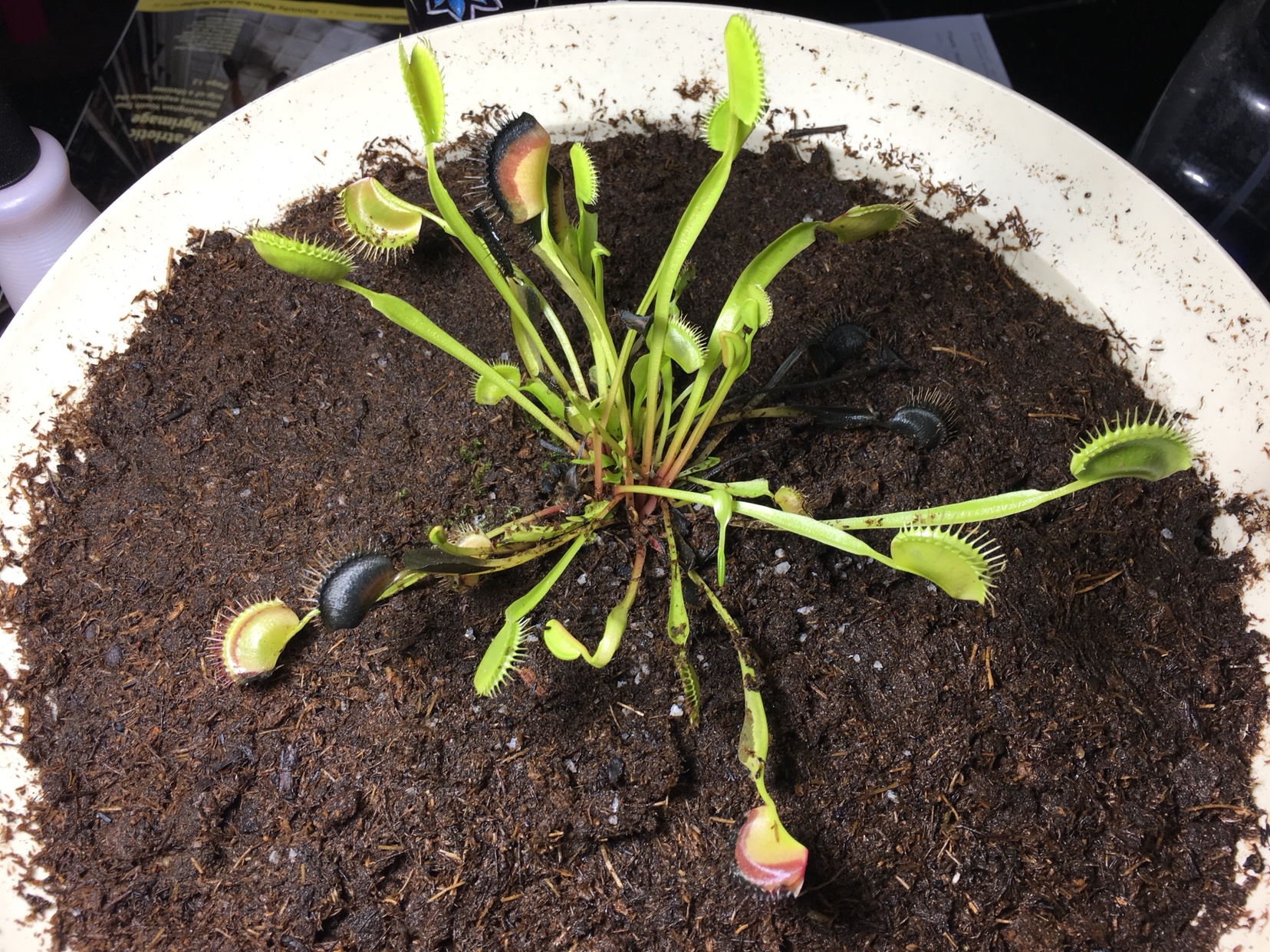 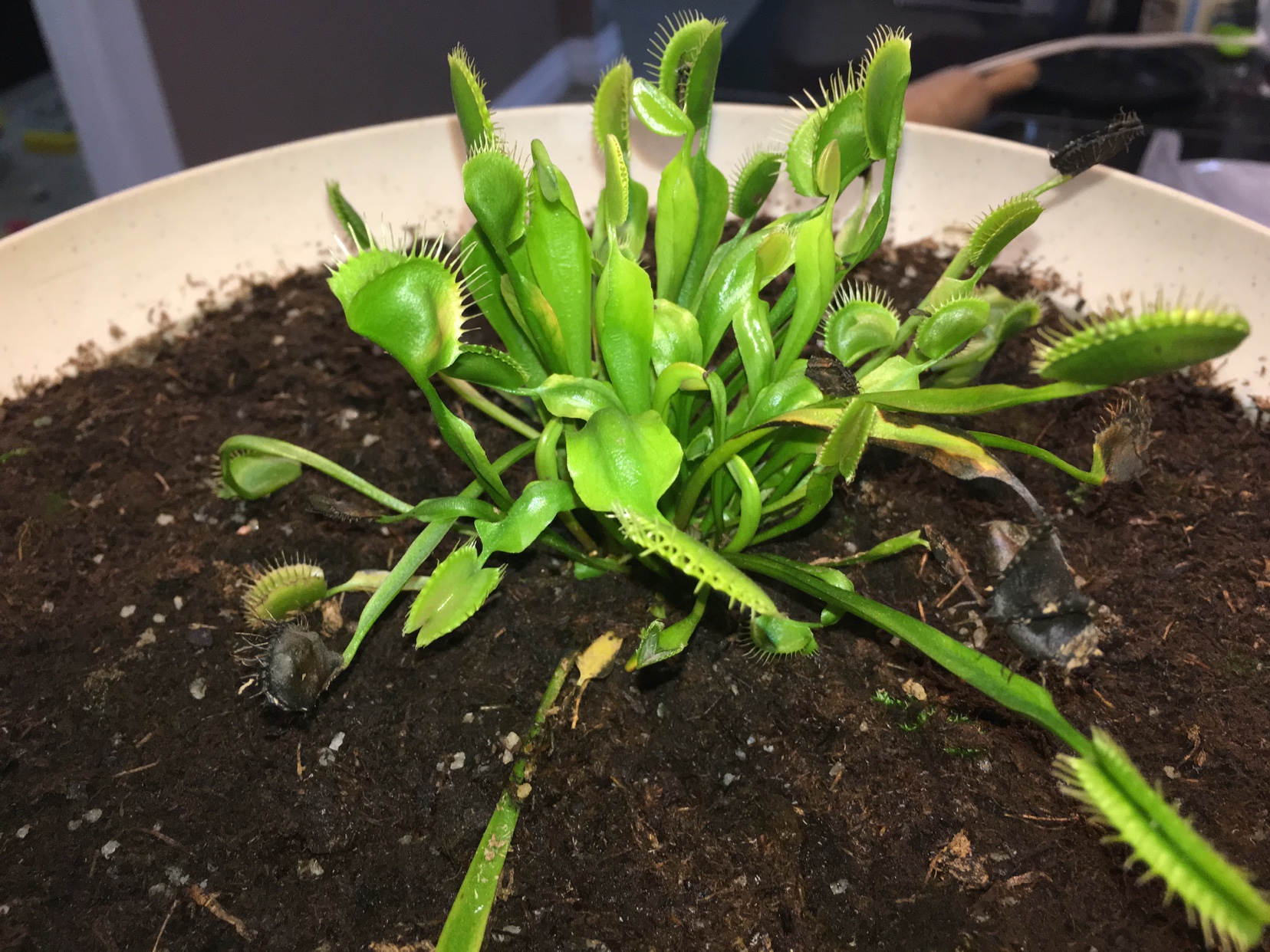 But I prefer LED growlights because plants don’t use or hardly use any of the orange,green,yellow light spectrums for photosynthesis! I would rather get them as much as I can of the spectrums they do use!

A lot of people prefer white light because it’s easier on their eyes and to notice any issues/diseases that pop up!


I’ve never seen the issue with a sick plant not recovering under a red/blue spectrum led grow light! Most likely those plants would of died regardless of what light was above them! Mostly what happened is they didn’t notice the issue in time to save the plant!

-  Wed Oct 25, 2017 12:03 am #306107
It's absolutely not true that plants hardly use any green, yellow, or orange light. It's misinformation spread by the growlight companies in order to sell you more lights.

nimbulan wrote:It's absolutely not true that plants hardly use any green, yellow, or orange light. It's misinformation spread by the growlight companies in order to sell you more lights.

Here’s some stuff on photosynthesis from “non-light manufacturers”! Sry but it’s biology :-p 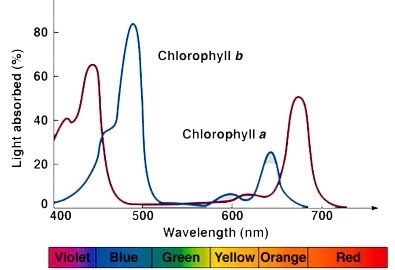 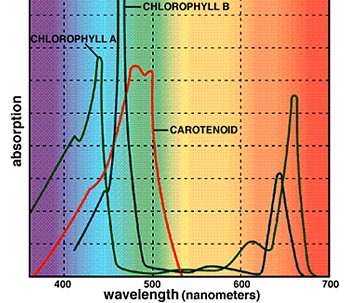 Note:
Carotenoids do not produce energy or help with the growth of the plant their main function is too help protect the plant from free elections from UV and IR rays!

-  Wed Oct 25, 2017 2:32 am #306112
Those graphs are technically correct, but their meaning is completely misinterpreted. Those show the light absorption of chlorophyll pigment in a laboratory solution which ignores the physical structure of plant leaves, as well as all accessory pigments which contribute to photosynthesis.

When you take into account chloroplasts (individual photosynthetic organs) the rate of yellow/green absorbance jumps up significantly. This is known as the PAR action spectrum:

Measurements taken directly on living plants results in the following graph known as the McCree Curve, which is intended to weight PAR values based on how much benefit the plant derives from a given wavelength. Keep in mind this graph is based on an average of measurements on a number of different plant species, but the differences are usually minor: 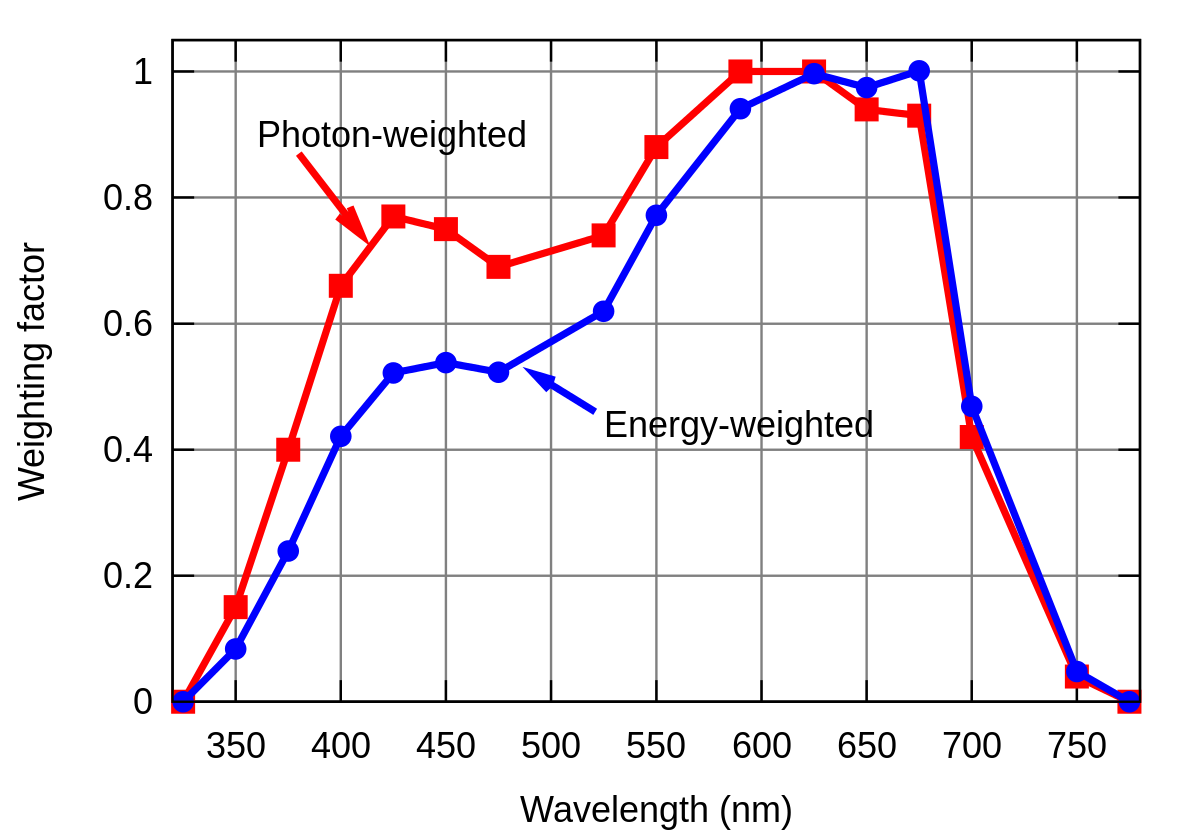 I can also link some scientific papers about why plants are green - essentially rather than being absorbed at the surface like red and blue light, green can penetrate deeper into the leaf and drives photosynthesis more efficiently in strong light: http://onlinelibrary.wiley.com/doi/10.1 ... 0563.x/pdf and https://oup.silverchair-cdn.com/oup/bac ... A4LVPAVW3Q

Also keep in mind that high pressure sodium lamps have been the standard for horticultural lighting for a long time, but the majority of the light they produce is green and yellow. Plants grow very well under them.

Anyway we're getting a bit off topic here...I just don't want the OP to feel like she has to buy red/blue lights for the plants.
nimbulan, nimbulan liked this

-  Wed Oct 25, 2017 3:16 am #306113
True, and I didn’t want op to separate his spectrums into separate bulbs lol, also I do find that red and blue to do almost all of the heavy lifting when it comes to the surface photosynthesis! I must admit I did neglect the deeper parts of the leafs!

but I must say that I personally have had better experience using led grow lights then high pressure sodium or metal halide! Plus no insane heating issues and at almost 3/5th less in electricity!

!!!!!!!But I have to admit u have to really pay attention to what wavelengths the growlight maker uses!!!!!!!!

Anyways I wanted to thank you for those reports! I’ll have to read more into them but ya we are getting off topic!

-  Sun Oct 29, 2017 7:14 pm #306329
Hey guys just an update. I got a T5 lamp with 6500k and placed a fan in the area to keep ventilation cause i noticed mold growing on my sarracenia. I took care of it and repotted her though. The soil she had from the nursery was not good. My vfts seem to be really happy from the light change and my capensis is finally stretching straight up!!! He's taken a long time to make new growth but if finally doing well. My Nepenthes also started a basal shoot! ♡♡♡
Here's the new setup:
I'll post more pictures in about two weeks when I see more positive changes

-  Fri Nov 10, 2017 5:28 am #306992
As promised, it's been about two weeks and I wanted to show you guys my green babie's progress! My adorable little sundew named Brutus has finally began making new leaves that have dew on the tentacles! Hes so cute I am so happy!

If I remember correctly, the grower had to put her[…]

I think they prohibit trade though I've heard th[…]

Vermiculite breaks down to quickly and in having a[…]

It will depend on the spec of your light

Hey everyone, very glad to be posting here! After[…]

Do the traps from a False Vivaparay work?

I think this makes a lot of sense word count[…]

What should I do now? Remove all the soil and so[…]