SpeedyKJ wrote:Some of the features Wally has that I think are catching are its low to the ground growth and it seems to hold its coloration even in the hot hot parts of the summer while most of the rest of my VFTs lose lots of their color and it tends to be a clumper

Yeah, I've been growing Wally for a while now and I like the clone a lot. It's an awesome plant and I didn't make that clear before. But as far as I can tell, all of its traits are found in Big Mouth too: excellent coloration, low grower, tendency to clump, etc. And when grown side by side, I can't tell them apart to save my life. For that reason, I decided it wasn't worth having two plants that are indistinguishable being sold under different names. There are more and more named flytraps showing up all the time and many of them look a lot like another already-named flytrap. Unfortunately there is limited time in the day and limited space in my greenhouses. As much as I'd like to propagate and make available every named flytrap, it is an impossibility. I don't immediately rule out growing any flytrap clone nor propagating it, but after growing a particular plant for a while, I make a decision based on my experience with the plant. I've probably seen well over 100 unique flytraps (raised from seed) now that look a lot like Big Mouth and Wally isn't one of the more impressive ones in my opinion. For that reason, I ruled out selling Wally in the FlytrapStore. But again, that's just one person's opinion.

SpeedyKJ wrote:And as someone said above me there have been some Wally's auctioned on eBay for high dollar... I could be mistaken but I think one went for over $300 early this summer

Yeah, I've seen some sell for very high prices. People will pay a lot of money based on good photos and a good description. The original seller of Wally (sam1greenthumb on eBay) does a great job growing plants to impressive sizes and writing a great sales pitch. It's no coincidence that his plants sell for such high dollar prices. He has great plants and is a good salesman.

But is Wally really different enough from Big Mouth to warrant having its own name? Not in my opinion. And is it worth paying $70 or $300 for Wally when you can get a really nice Big Mouth for under $20? I don't think so. I think FlytrapStore will probably sell TC Wally plants to Joel and other vendors to resell and only carry Big Mouth in the store...at least for now. I do have quite a few (a few dozen maybe) Wally flytraps growing out in the greenhouses, so they may show up in very limited quantities in the store or on eBay at some point. Or I may just sell them all to Joel and focus on the many dozens of other flytraps I think are more worthwhile.
My Growlist
Eat Plants! Leave the meat for our pet plants

-  Wed Aug 29, 2012 9:10 pm #152531
I already have a big mouth, it has nice color and its between clumping and putting out large traps. When I first got the plant there was a small baby big mouth growing and went unnoticed for about a week. When I planted them into a bigger pot I separated them and the small one has been growing like crazy. Its putting out larger and larger traps with deep red color inside and right now it has about 13 traps open

Matt wrote:Those Wally's are most likely from my TC work! I sold a bunch of them out of TC to Joel earlier this year. I haven't been all that impressed with Wally myself (seems almost exactly like Big Mouth to me, but that's just one opinion), so I haven't made a point of propagating them for sale in the FlytrapStore but instead decided to sell most of them to Joel to sell.

Matt I bought 3 or 4 Wallys from Sam Green Thumb, the vendor on Ebay who sometimes auctions them, and AFAIK, the original source for them. Out of these 3 or 4 plants, which also came with a few tiny Wallys attached to them, I produced probably over 400 of them. I bought 2 of them 2 years ago and the other 1 or 2 I believe a year and half ago or so. Most of them are small plants right now, except for a few I kept as mother plants. All the Wallys I've sold so far, which is probably around 20 total, came from these original 3 or 4 plants.

I have yours growing out and they are doing very nicely but I doubt I'll sell them any sooner than late Winter.


SpeedyKJ wrote: Matt I think it would be worth trying to sell a couple at fts

And as someone said above me there have been some Wally's auctioned on eBay for high dollar... I could be mistaken but I think one went for over $300 early this summer

I paid about 70.00 a piece for my first two. It was a good investment. I've already made what I paid for them back and more and have about 350 or more of these plants still from the original 3 or 4.

Wally gets about as big as a Big Mouth, which was its parent plant. But it has even shorter leaves than Big Mouth does and can get even more purplish in its traps than Big Mouth too. I've seen my Wallys red all over with purple traps before. It almost can be called a red clone.

It also tends to multiply like crazy. One large plant can make 15 or more natural divisions a year easily. Keep in mind this is strictly from natural division, unaffected by TC at all. Who knows what the TCed ones will do. Wally also is a pretty fast grower and I have found can grow at a good pace in cooler temperatures as well just like B52 can, unlike all other clones that I know. For example, Wally can put on decent growth even in the high 60s and overcast.

IMO, there's not much point in buying a Big Mouth if you can get a Wally instead. Wally has more pronounced features of all the features that Big Mouth has that has made it popular. It's like a super Big Mouth.
idontlikeforms, idontlikeforms liked this

-  Tue Sep 04, 2012 6:22 pm #153117
Thanks for the post Joel! Glad to hear that the Wally flytraps I sent you are doing well, though aren't quite ready for sale yet. I hope to see them finding new homes soon. I'm sure that they'll sell well once you list them. There seems to be quite a lot of demand for Wally, or any other colorful, giant flytrap for that matter! I have a lot more to send you soon. Sorry I didn't get any to you recently. I haven't done any TC work since June, so I'm way, way behind. I'm going to start in on the TC work when I get back home next week.

idontlikeforms wrote:IMO, there's not much point in buying a Big Mouth if you can get a Wally instead. Wally has more pronounced features of all the features that Big Mouth has that has made it popular. It's like a super Big Mouth.

Hmm, I tend to disagree with what I've seen from Wally so far, but that's just my opinion. I can't really tell them apart at all. Everything you describe about Wally could also be used to describe Big Mouth: very short leaves, deep red-purple traps, almost a red variety at times, lots of natural divisions in a year, etc. To me, Wally is another case where a flytrap is named without really being significantly different enough from another plant (Big Mouth) to warrant a name.

idontlikeforms wrote:Wally gets about as big as a Big Mouth, which was its parent plant. But it has even shorter leaves than Big Mouth does and can get even more purplish in its traps than Big Mouth too.

With its tendency to divide so much, Wally takes a bit longer to reach full size than Big Mouth, though Big Mouth also divides almost as much. It seems that Big Mouth is a larger overall plant to me. Wally does seem to have slightly shorter leaves (not really noticeably shorter in my opinion -- Big Mouth has very short leaves too), which means it is slightly smaller in overall appearance, but I don't notice much of a difference in coloration between the two, but we have very different growing conditions so that could account for that difference in observation.

idontlikeforms wrote:I've seen my Wallys red all over with purple traps before. It almost can be called a red clone.

Big Mouth too though. I honestly don't notice much, if any, difference coloration between Wally and Big Mouth. Like Wally, Big Mouth turns almost all red late in the fall and winter. Here's a shot of one of my large plants a few years ago in August (by November it was almost all red): 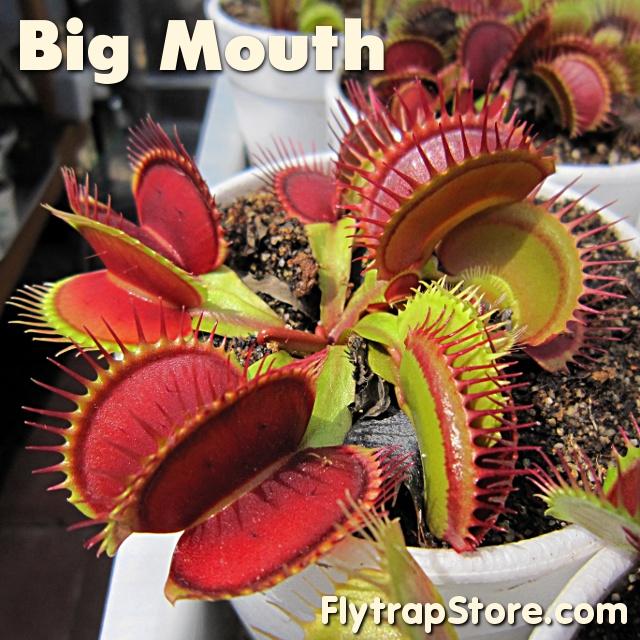 Unfortunately I'm extremely busy right now and may be very busy till November so I'd rather not spend much time on the topic. My wife is due at the end of the month and with my 2 current main employees I've found myself having to do more work than I planned on.

But I'll point out a few things between the 2 clones and then just leave it at that. First of all I have many of both Wallys and Big Mouths, so there has been no shortage of the 2 for me to compare and contrast throughout the past 2 years. I probably have seen the 2 in numbers growing side by side more than anyone else, with the possible exception of Sam Green Thumb, who evidently has plenty of both clones as well. Wally has darker color, not just that it tans darker and easier as well but the green non-tanned color is a darker hue of green as well. Wally grows faster than Big Mouth too. The deep purple tan it gets in its traps is darker than the purple tan that Big Mouth gets. When I saw my Wallys tan really dark the whole plant was red. There may have been some dark green in a few tiny spots not well exposed to the sun but the plant was basically 95% red or purple. I've never seen my Big Mouths do that though I have seen them mostly red and purple all over before too.

These are just my observations. Maybe Sam knows even more. Personally I like the clone and suspect it can be fairly popular not unlike Big Mouth and basically for the same reasons. Wally is a nice name IMO, but I think beginners will just assume Big Mouth is a more impressive plant and it may be that it never receives the same level of popularity that Big Mouth does just because of this reason.

Sorry I don't really have time for more.

Reply
Return to “Photos of Venus Fly Traps”
29 May

After the flowers are pollinated the petals dry u[…]

The disease you're thinking of is called mastitis.[…]

So I have two Venus fly traps, both of which I ju[…]

Maybe 1-2 hours during the day.

This site's fly trap soil is perfect for flytraps.[…]

I grow mine indoors under lights, no extra humidit[…]