By HoshiTheCat2016 -  Fri Oct 29, 2021 6:10 am
Location:  Arizona
Posts:  7
Joined:  Sun Oct 17, 2021 11:40 am
-  Fri Oct 29, 2021 6:10 am #391405
Hi, first timer with a question about indoor plants.
I'm growing indoors for 2 reasons:
1)I live in a partially buried 1st floor apartment and the patio has high walls so not much sunlight anyway
2) I want to be able to actually see my little guy.
I've had it about a month now. Using sphagnum moss as the growth medium. Last night I noticed some white, fluffy fungal growth so I did a complete change out and tossed the planter as well (didn't care much for it anyway). I also ordered and antifungal spray which should arrive tomorrow. It is under a grow light 12 hours a day. Last week I attempted feeding 2 traps but neither would close with stimulus so I removed the food, I guess it's not ready yet? Because the plant is so small and freshly replanted I was considering skipping this year's dormancy. Is that OK? If not could I toss it on the patio and forget about it til February or March? I live in Southern AZ so our overnight winter temps rarely go below 30. I've lost a couple traps but I see many small ones trying to come up. I'm currently at work but I can post some photos tomorrow. Thank you.

-  Fri Oct 29, 2021 6:30 am #391407
Yeah I think you'll be fine skipping dormancy.
The white growth on the soil is probably from high humidity/wet soil. All they need is for the soil to be a damp-ish moist, so that the top feels spongey.
Also, flytraps need all the light they can get. If you can, try cranking the light up to 14 hours a day.
Looking for:
Dionaea M. 'Fused Tooth'
Dionaea M. 'Alien'
Dionaea M. 'Scarlatine'

Lets see if we can help you. First thing is that does not look like sphagnum moss. I'm not a moss expert so I can't pinpoint species but sphagnum has a lot of rammification or strands going along the length and the head looks different. I have a pic of what sphagnum looks like. Density can vary but the structure is the same. 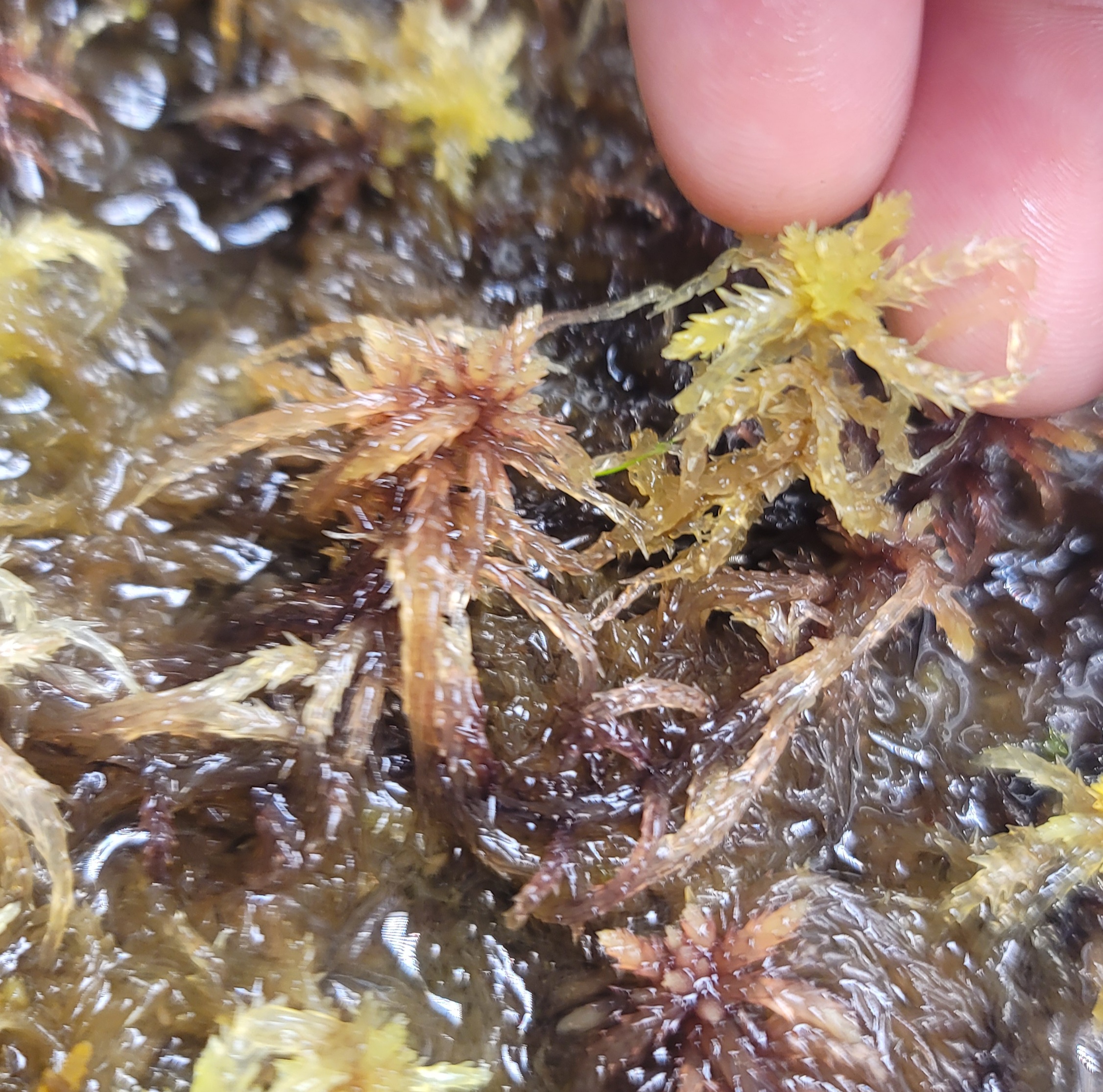 Unless it is marketed as live sphagnum, it's virtually always going to be a tan color (sometimes a little color is in there because it isn't *fully* dead depending where you get it; the pressed bricks are fully dead and dehydrated). The moss itself that you have it in is likely toxic to the plant. That will kill it. Plants will sulk a little bit after a repot sometimes (particularly if you damage it) though so when you do change the media, don't fret too much. If your conditions are right it'll come back.


Also, if you encounter that kind of mold again (usually high moisture and no airflow), you don't need to throw away the pot. Hit it with a cp-safe fungicide and it'll knock that stuff out. I personally use Scott's Disease EX. If you change it like that you'll be wasting money.

At this juncture, I'd take it out and wrap the roots in a damp paper towel (with safe water). I'd suggest getting either some new zealand or chilean sphagnum moss as soon as possible. Besgrow sells a great sphagnum moss but it's a little expensive. If you have better gro orchid moss (or any at this point, even mossy oak)at your hardware store I'd get that if it's available. If that isn't available, you can make it happen with some peat moss and perlite (no additives at all to the components 50/50 mix) and repot it one more time. Place it in a place where it gets good light, try to increase airflow, and let it recover. We're entering a time where plants go dormant too. I'm not a pro on fridge dormancy but there are tons of articles on it. Alternatively, if your climate allows, place it outside in the shade for a bit to acclimate before bringing it out into the light and let it do its thing.
Skipping dormance is doable but it's definitely risky if you're not equipped for it. That usually requires a lot more effort.

*Edit* I just realized you live in Arizona. You should be able to keep it outside for dormancy. You can try to induce it by putting it near a window where it gets cold with a shorter photoperiod, that may work if you really want to keep it inside
Today I will do what others won't so tomorrow I can do what other's can't. Carnivorous Plants for Sale! -> topic48806.html
My Grow List

-  Fri Oct 29, 2021 11:05 pm #391449
Thanks for the replies! I got the moss off Amazon, I'll attach a picture of the label. The light is a red and blue spectrum LED light. It usually looks purple but the flash from my camera canceled it out. I just woke up (3rd shifter) and checked on it and one of the leaves is standing up a bit more. The antifungal spray arrived today so going to hit it with that too.

-  Sat Oct 30, 2021 1:37 am #391460
Then they can definitely stay dormant outside there. You may be able to trick the plant if you put it by the window where it gets cold. Panman's right, That light might not be cutting it; especially if they're growing out like that. I'm going to say that moss was misrepresented, though there are tons of species of mosses out there. You'll be wanting something in this ballpark: https://www.amazon.com/besgrow-Zealand- ... 9513&psc=1
or something like this: https://www.ebay.com/itm/264750605568

A fellow user recommended the second one to me last time I brought up moss and I decided to give it a go. By volume, it's half the price and the quality is pretty good overall. It feels a little different but it does the job. I tested some flytraps in it and it holds water well. Besgrow is usually some top shelf stuff but if you have one plant, it's good. If you plan to grow indoors and are committed to it, perhaps add some perlite to the mix to keep it from holding an excessive amount of water. It can work alright if the light is strong enough and you're careful with the watering habits. I personally had a rough experience with it so I don't but some do. Idk how much you'd be willing to spend on lights but something like a yescom would probably work, or if you want to get real into it, a mars hydro or viparspectra 1000 would do good for a small space. Hope that helps. First thing though is replacing that moss.
Today I will do what others won't so tomorrow I can do what other's can't. Carnivorous Plants for Sale! -> topic48806.html
My Grow List

-  Sat Oct 30, 2021 7:08 pm #391499
I ordered replacement moss and it should arrive next week. I'll look into better lighting come payday. For today I took it outside, got a couple hours of full sun and now it's just kinda shady. The temperature outside is about the same as I keep it indoors, 74, so hopefully won't be a shock. Thank you guys. Even if this one is too far gone I feel prepared to try again

MikeB wrote: ↑Sun Oct 31, 2021 12:16 am If your flytrap is willing to cooperate, you might be able to keep it indoors year-round. Read this article for more info:

In my opinion if you want a good cultivar that is easy to skip dormancy with, "B52" is your go-to flytrap.
Looking for:
Dionaea M. 'Fused Tooth'
Dionaea M. 'Alien'
Dionaea M. 'Scarlatine'

Grow light lumins and light brightness numbers on growlights are often just pulled out of thin air. They aren't accurate.
Interested in drosera (the most), sarracenia, dionaea, nepenthes, and possibly pinguicula

-  Sun Oct 31, 2021 2:47 am #391551
John Brittnacher, who is very experienced with carnivorous plants, has found a way to grow them year-round. I personally don't do this, because I believe that cultivated plants should get dormancy just like their wild relatives.

One of the people in this forum has a pot of SD Kronos plants that are growing great year after year without dormancy. Some plants just handle it better than others.

As Chef says, with the new and unfamiliar, its bes[…]

Too bad about the theft. They are rather pricey to[…]

There's a thread for FTS seeds where you can pos[…]

If they don’t germinate while in the fridg[…]

Then you better have a plan your tropical and subt[…]