Apollyon wrote: ↑Mon Feb 22, 2021 5:46 pm It's totally about to pop off too. When mine grew, it GREW. I'm excited to see future updates. I want to see if yours gets darker than mine. It looks like your light is having a better effect than mine did.

Apollyon wrote: ↑Mon Feb 22, 2021 5:46 pm It's totally about to pop off too. When mine grew, it GREW. I'm excited to see future updates. I want to see if yours gets darker than mine. It looks like your light is having a better effect than mine did.

Now you got me really excited. I'm curious to know how you can tell when its going to pop off?

I'm just basing that off of francis experience and my own. In my case, it sat for a while acclimating. I decided to keep it in relative conditions as it was grown (iirc you bagged yours) which may be the reason why mine grew the way it did because it was conditioned for it. Once it began to grow a pitcher, it immediately started growing another and so on at a rapid rate. You giving that light will allow it to process more energy so I imagine it'll grow better going forward.

I noticed francis fertilized his for a time and I do as well. Kinda sketchy considering the plant but I treated like any cephalotus. I borrowed an idea from Matt one time about filling the pitchers with fertilizer (I chose Maxsea) and I fill virtually of them. I had one pitcher death in the beginning and since I've refilled over 20 numerous times. It's similar to Sarrs or Neps in how if it's too strong it'll terminate a pitcher and not the plant. It uses the solution as a feeding source. I use a 1/2 tsp per gallon solution and beyond that I'll do a super light mist on it every couple weeks or so (that isn't necessary though). I won't full on condone fertilizing CPs as it is sketchy if you don't do it regularly but I firmly believe it was a factor. I'm actually about to post a pic of mine on my thread later on I think. Yours inspired me.
Berrybob liked this
Today I will do what others won't so tomorrow I can do what other's can't. Carnivorous Plants for Sale! -> topic48806.html
My Grow List

-  Mon Feb 22, 2021 8:04 pm #374083
Regarding the color, here is a division taken at the same time last year as the divisions you guys have. The pitcher on the right is newly opened so it doesn't have the chance to color yet. The darker pitcher is quite typical of color for the Eden Black from my experience. I have it currently sitting 20" below LED grow lights. When I only had the mother plant, I could afford to have the plant sit only 6" away from the LED lights. During that time, the plant achieved it's darkest colors I've ever seen. The bigger clump photo is the same mother plant that I have posted on my updates thread. It is sitting in the same tray as the few divisions I have. From my experience, if you really want them to color up the best, dedicate an LED light to a single pot and put it as close to the plant as reasonably possible. 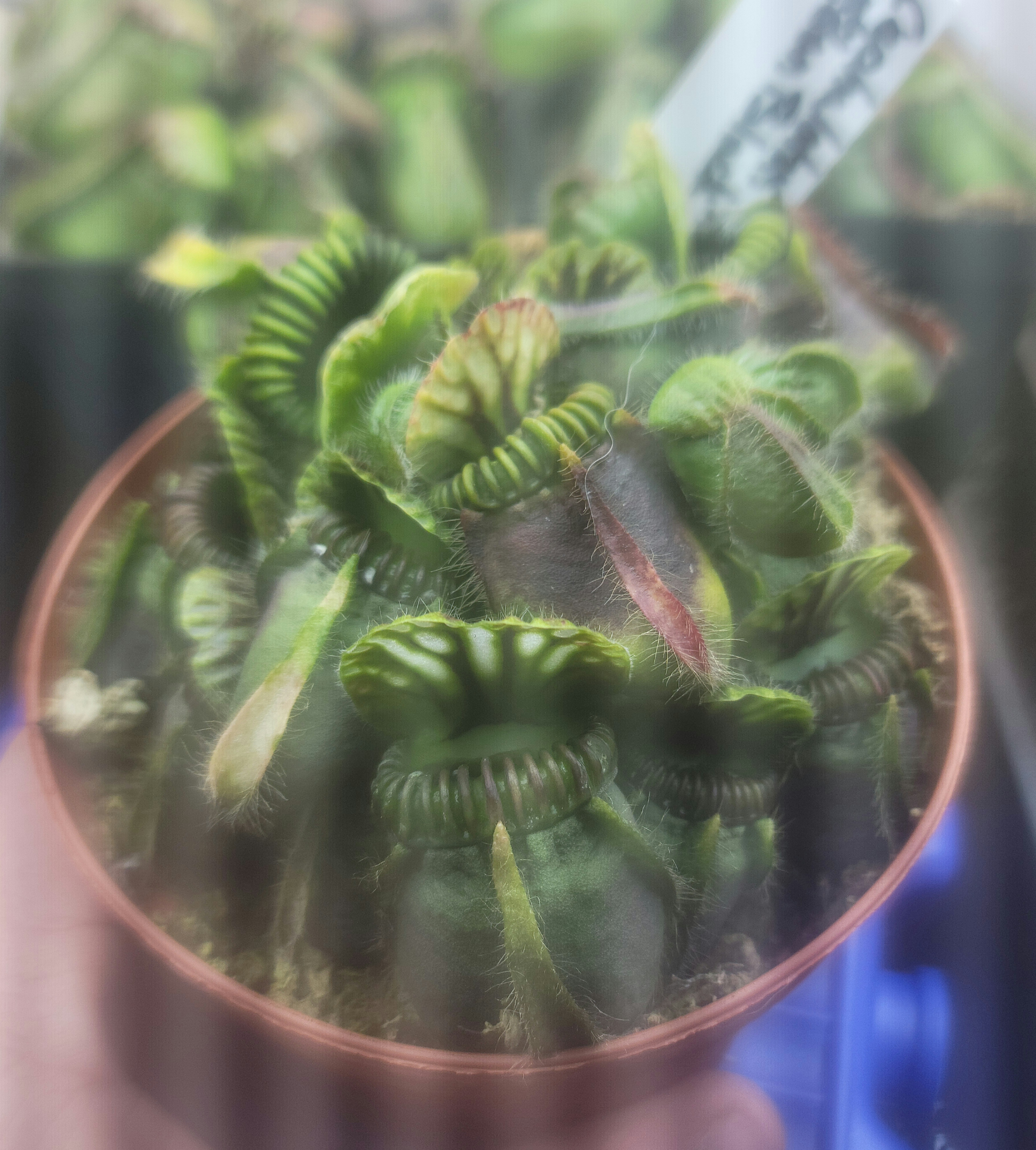 Something about the lights interferes with the camera's lens. Parts of it are fairly dark but I think I would need mylar or something if I want it to color the entirety of the plant. It's cool looking at the mother plant it came from! I was actually thinking of putting it in an identical pot

You feel it works well?
Berrybob liked this
Today I will do what others won't so tomorrow I can do what other's can't. Carnivorous Plants for Sale! -> topic48806.html
My Grow List

-  Tue Feb 23, 2021 12:27 am #374113
They're actually Yescom LEDs but I think you're on to something. I have to find some kind of place to take pics of my plants lol. Ironically, the T5s don't cause any lines for me but it could be a distance thing on both accounts.
Today I will do what others won't so tomorrow I can do what other's can't. Carnivorous Plants for Sale! -> topic48806.html
My Grow List

Sent from my SM-G975U using Tapatalk

Reply
Return to “Pitcher Plants”
16 May

Hello all, My new growth on my VFT Typical is not […]

@ChefDean , That's a good idea about the care she[…]

I've noticed that happens when I feed large or har[…]