The musings of Carnivorous Plant addicts! 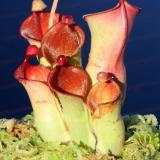 Posted by Matt on Monday, 01 February 2010 in Heliamphora

I've been using Maxsea 16*16*16 at a concentration of 1.5 teaspoons/gallon on my Heliamphora nutans and Heliamphora minor for about 6 weeks now. I've been drenching the soil thoroughly every 2 weeks and then thoroughly drenching with distilled water about every 4 to 5 days. They seem to be responding very well to the fertilizer. The H. nutans is doing much better most likely because it's been established a month longer than the H. minor which is still likely getting over shipping and transplanting shock. I've had the H. nutans since November 13th and the H. minor only since December 20th. The growth on the H. minor isn't as obvious, though it's there, so I'm only showing some photos of the H. nutans. Here are some before shots of the Heliamphora nutans taken on December 14th. Here are the after shots taken 2-1-2010 It looks to me like it's definitely liking the added nutrition. I won't say for sure that root fertilizing is the right thing to do for Heliamphora until I've done it longer, but it definitely is producing desirable results so far.

We have 81 guests and no members online

We have 119 guests and 2 members online